Wow, until now I never thought about the fact that the three newest humanoid Muppets are not made from AMs.

I’m 99% convinced the black and white cow with the blonde wig of the Moo Wave is the Ivy Austin voiced one while the brown one with the red wig is the one by Tish Summer Rabes going by appearance.

- One girl asks her sister, who's watching TV, if she knows what it's like to be scared, but she claims she's not scared of anything. The first girl dons a scary mask, which, sure enough, frightens her sister, who just responds "Far out!". I can easily see this as a scenario with Marcie and Peppermint Patty, plus this cartoon has plenty of dialogue to make up a full four-paneled daily comic strip.

- A toddler tries climbing a flight of stairs, but he learns how to make it from one step to another all by himself. The young child sort of looks like Rerun, the baby brother to Linus and Lucy Van Pelt. Incidentally, the soundtrack for this cartoon, which is a jazz piano and percussion score, sounds very reminiscent to Vince Giraldi's music in some of the "Peanuts" TV specials.

- This one is likely no coincidence. It's a Cliff Roberts animation with a little boy drawing a self portrait of himself on an easel. He turns the picture around for us to see the side by side comparison, and the boy just says "Me", with the accompanying sight word appearing on screen. It's not hard to notice that the boy in this cartoon resembles none other than Charlie Brown! He has a round head, very little hair, and is wearing a shirt with a zig zag stripe across the front. Those cannot possibly be any more similar physical descriptions of Schultz's best known character.

Also, Charlie Brown's dog, Snoopy, was seen twice in the background of that early "Round" film, that was part of the "Sesame Street" sales pitch. One scene shows a yo-yo in motion winding itself up and down the string. Behind that action is a decal on a wall of Snoopy, posed as if he's happily hopping. If you look very carefully in a very quick footage of a boy standing at a pool table playing billiards, you can see the same image of Snoopy far off in the background.

There's this one cartoon from the mid 1970s, I believe, with two identical twins, both wearing top hats (obscuring their eyes much like Beetle Bailey) and are performing a vaudeville number on how they are both the same. That is until one of them dances his way off a ledge and claims they could also be different.

I hope many out there are familiar with the classic Orson Wells blockbuster film "CITIZEN KANE". There's a scene when a party is thrown in honor of Wells' character, Charles Foster Kane, celebrating his successful achievements working at the press. In that scene, a group of ballyhoo showgirls perform to a song dedicated to Kane in his honor. The reason I bring this up is because the "SAME" song from the above mentioned cartoon from "Sesame Street" sounds very much inspired by the song from that movie.
Last edited: Jul 22, 2021
S

For anyone interested, and for those who get the cable network Turner Classic Movies, you may want to tune into the movie tomorrow at 11:15am titled "BOWERY TO BAGHDAD" with the Bowery Boys. If you do, listen to the voice of Leo Gorcey, the short, stubby, dark-haired member of the group. You will agree with me that he sounds exactly like Tough Eddie, the buly who was at the beach with Bert and Ernie in one early 1970s segment. Either him, or else Biff the Construction Worker. I'm glad Gorcey is one of the regulars in these series of films, and you don't have to sit through the entire film to look for him. I feel that referring to the "Bowery Boys" movies in particular as "B pictures" is a little too kind.
Last edited: Jul 22, 2021
S

I don't know if anyone else had noticed this, but it appears that Jim was not all fully active during season 2. Sure, he was available to perform Ernie in various segments, as well as Guy Smiley (in only two game show segments), and a few one-shot AMs. It also makes sense since Kermit was absent from appearing in any new material that season. That is of course why they created Herbert Birdsfoot to temporarily replace Kermit during the second season. Even though Kermit returned for new material starting in season 3, Herb was still appearing on the show in very few inserts up until the following year (season 4).

If you look through the guide of all Muppet inserts created for season 2, you will notice that Jim really did not perform as many AMs as he did during the first season. As I repeat myself, he only seemed to perform Ernie more so than any other characters during the second season. Obviously, Jim was busy around this time working on some other Muppet specials (probably "The Frog Prince"), so he was really only able to perform Ernie that season whenever he had time to come to the Teletape studio.

UPDATE: This message has been edited. I just did some research shortly after, and discovered "The Frog Prince" was the Muppet special created around 1970-71. I also had entirely forgotten about the situation of Kermit being looked upon as going commercial. Please pardon my error.
Last edited: Jul 30, 2021

You are totally wrong with the Kermit thing, after Hey Cinderella, there was a brief controversy surrounding Kermit and that the frog had become too commercial.
D

It appears as though season 6 was the season (during the "classic" years) that seemed to air the fewest number of new Muppet segments. In the first half of season 6, there is a good bulk of newly debuting Muppet inserts, but it appears that mid-way through, and mostly later that season, any new segments airing are mostly live films and especially cartoons.

My only guess is likely the same as anyone else - Jim, Frank, Jerry, and Richard were all busy taping the "Muppet Show" pilot "Sex and Violence", or else that "long-sought after" (to us classic SS fans) TV special for ABC-TV, "Out to Lunch". I don't know if the latter was in production the same time as the sixth season, but I do know the "S & V" pilot was taped sometime in the fall of 1974 (set to air in spring 1975), so during that time Jim and his team were more focused on the pilot for a new Muppet network television series.
Last edited: Jul 30, 2021
S

There's this one picture in the book "Jim Henson: The Works" on page 70 that involves Jerry, Jim (w/ Caroly WIlcox), Frank, and Richard all respectively performing the Count, Ernie, Bert, and Sully on the set of Bert and Ernie's apartment. Many may have wondered (and I myself was one) exactly what segment was being taped during the time that photograph was taken. It's very likely that wasn't even a segment. It was probably just taken for publicity purposes, as a way of presenting how the Muppet performers work on a "puppet scaled" set, as well as providing a behind the scenes glimpse of "Sesame Street". I have reason to believe this picture was taken sometime during season 8 of the show, and I will gladly explain my reasoning of likely evidence -

For years I've been wondering why the backdrop outside B & E's apartment is bright red instead of the standard sky blue. It's very likely that this picture was taken the same time as the season 8 episode (1045) when the Count hosts his own radio countdown show. A red background came into use for the recording room of the radio station. 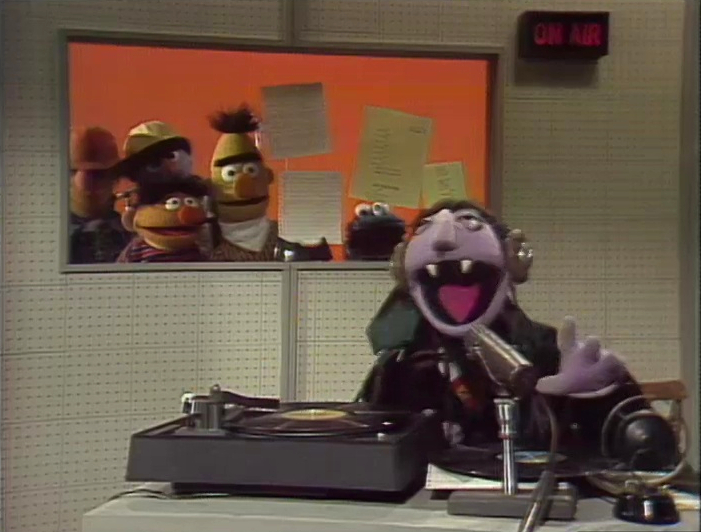 All four of the characters from that behind the scenes picture are all present here, along with Cookie Monster and Biff. Other characters appear throughout the story segment of this episode, and I sure hope we could see this one someday!
You must log in or register to reply here.
Share:
Facebook Twitter Reddit Pinterest Tumblr WhatsApp Email Link
Top