Also, did you guys know that the same bowl of mud, in which Slimey was wriggling in, from show 1922, was later used again? That was three episodes later, in show 1925, when Slimey was taking a mudbath: 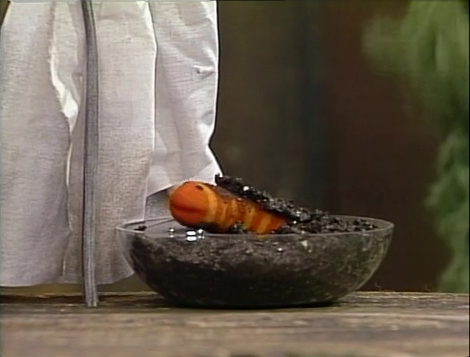 I noticed, after hearing the song "The Boy from New York City" by The Manhattan Transfer, a familiar note sequence reminds me of the beginning of the original theme to Sesame Street. The note sequence in both those songs sound familiar..

Could it be possible that the band who originally recorded "The Boy from New York City" in the mid-1960s, The Ad Libs, threatened to sue the CTW for unauthorized usage of the note sequence, and that could explain the dropping of such note sequence from the SS opening theme starting in the 1992-93 season?

A similar note sequence was also used in the opening theme to Maxie's World.

His Mexican counterpart, Pancho, certainly does, and even has his own song about it (borrowed from Cookie Monster, that is). . . .

YellowYahooey said:
I noticed, after hearing the song "The Boy from New York City" by The Manhattan Transfer, a familiar note sequence reminds me of the beginning of the original theme to Sesame Street. The note sequence in both those songs sound familiar..
Click to expand...

For that very reason, when I was younger and I'd sing along to the song, I would alter the lyrics of the refrain from, "Tell us about the boy from New York City" to "Sesame Street sits in New York City."
S

Oscarfan said:
Well, the street scenes and inserts are shot at different times.
Click to expand...

Oh. yes, I've known that. As I've pointed out before, the first season Cookie Monster puppet and the modified version (that many associate with debuting in season 3) respectively appeared in a street scene and a previously taped insert in episode 260 (from season 2). I just found that strange because the inserts are taped prior to the production of the episode's scenes, and they could've just easily used the newer Cookie Monster puppet in the street scene, since that puppet had already been in existence in that "peppermint sticks" segment with Ernie and Farley. There was also another season 2 segment that employed the newly rebuilt Cookie Monster puppet that also featured Ernie. It was when Ernie was using a scale to measure the weights of two stacks of cookies. I believe that segment had a light purple background and was taped the same day as the segment with the peppermint sticks, as well as the segment with the AM family sorting into different groups.
Last edited: Aug 5, 2021
S

There's this one picture on the inside of the book jacket for "Jim Henson : The Works" (great book, by the way) of Jim performing the Cookie Monster puppet from the first two seasons. In this picture, Cookie Monster actually has large fang-like teeth! He's holding, what appears to be a round metal object, quite possibly a hubcap, and, I believe, the dial of a scale. One book (I forget which one) cites this picture as being sourced from Jim's Academy Award nominated film "Timepiece". I actually haven't seen all of that film, but that's likely wrong, since it's been stated that there were no Muppets in that film, plus Jim's hair is longer in this picture; looking like he did in the very late 1960/early 1970s. I'm guessing this is just a publicity photo, although I used to think it was from a "Sesame Street" segment demonstrating round things.
Last edited: Aug 5, 2021

If you ask me I think season 16 could have had an opportunity to have Michael Jackson as a guest star on Sesame Street for a potential 80s music video style segment…. I mean he practically saved the show during the “Letter B” incident. He deserved a spot.

Unless perhaps maybe I saw the Bedtime Stories and Songs tape at some point….. but I definitely don’t remember ever renting that tape from a video store or library.
M

Some segment characters seem to have had the majority of their segments debut on their first seasons. Season two has the highest amount of Sherlock Hemlock segments, with following seasons having very few new appearances by him (I also saw that the majority of 1970s Sherlock segments were last aired around season 16, while the later Mysterious Theater segments aired quite a bit in the 1990s).

I think most Amazing Mumford insert segments debuted in season 3, though he would go on to be seen in street scenes a lot over the years.

Most Lefty the Salesman segments debuted in the first three seasons, with few new appearances afterwards. Many of them continued to air until season 29, though I think a lot of them were last seen much sooner (I think the notepad salesman and ME salesman bits weren’t shown much after season two).

I would have thought most of the Little Jerry and the Monotones segments aired in season 3, but I don’t think there were any seasons with a ton of segments with them. The first two seasons had many precursors to the characters, some arguably them (I consider Mad and maybe The Word to be their only real appearances in season two, though I will also count them as being in Grover’s walk and exit bits). I thought Proud debuted in season three but I think the wiki notes it as debuting in season four, I can’t remember of Sad debuted in season 4 or 5, I think both Danger and Telephone Rock debuted in season 6, and other appearances were scattered over the years, very few and far between (it kinda feels random that they would suddenly come to the street in season 19, then have an episode where Elmo has to fill in for Little Jerry in season 22, and then make an appearance on the street in season 31).

Most of Herbert Birdsfoot’s appearances were in season two, which I am not surprised by. I used to think that he was only around in new material that season (not counting a background appearance at Ernie’s surprise party for Bert), so I am more surprised that a handful of his segments debuted after season two.

Another of those odd things is how the early Alphabet Chat segments debuted in the 1970s, then we got a couple more in the 1990s. By then they stopped airing the former ones (most likely due to the pipe, which seems to be him actually smoking, in constraint to Alistair Cookie having a pipe to look classy and eat). But then they only did two new Alphabet Chat segments in the 1990s, in addition to giving Mr. Chatterly a street appearance.

minor muppetz said:
Another of those odd things is how the early Alphabet Chat segments debuted in the 1970s, then we got a couple more in the 1990s. By then they stopped airing the former ones (most likely due to the pipe, which seems to be him actually smoking, in constraint to Alistair Cookie having a pipe to look classy and eat). But then they only did two new Alphabet Chat segments in the 1990s, in addition to giving Mr. Chatterly a street appearance.
Click to expand...