Was 1999 the only year the Slimey goes to space arc was re-aired (with the season 30 intro and segment edit placements)? Cause I’ll admit, while I think I remember seeing those episodes air in those versions in 1999, I remember my PBS station aired those same re-airings in 2001 (because I remember specifically seeing those same episodes when I was in first grade; some instances include seeing my final exposure of “Danger’s No Stranger” on TV, the Al’s Alphabet Garage segment which I managed to see twice, and that really weird mechanical machinery film). I don’t know if it was just my PBS that aired them that year or if other local PBS stations aired them that same year.

This could either be a false memory (as it happened so long ago, things I thought I saw were just in my imagination all along) or not (PBS stations are run individually, so maybe they could have).

I know for certain I saw the re-airings cause I looked at the alterations on the Muppet wiki and it completely came back to me, but yeah, I guess it was just my PBS that must have shown them in 2001 cause I definitely know I saw them when I was in first grade at the time (it came off as a surprise seeing them re-syndicated, but certainly nostalgic).

My PBS used to just air random episodes of shows during pledge drive weeks, and I can remember as late as 2003 them airing episodes from as far back as Season 29, such as episode 3743, but again, it wasn't just SS, they'd air random episodes of all of their shows, rather than stick to whatever schedule or rotation they normally did during those pledge drive weeks for whatever reason. As I've mentioned before, it wasn't until 2005 that they began adhere to a national schedule, rather than their own individual schedule.

My PBS would still air ATC episodes up until (I think) season 31 premiered in specific time slots. Then they were retired altogether minus the edited Slimey goes to space episodes.
S

A friend of mine thinks that Al, the one-shot AM garage mechanic, from the "Alphabet Garage" segment looks like Paul Zaloom as Beakman from the
Saturday morning science show "Beakman's World". 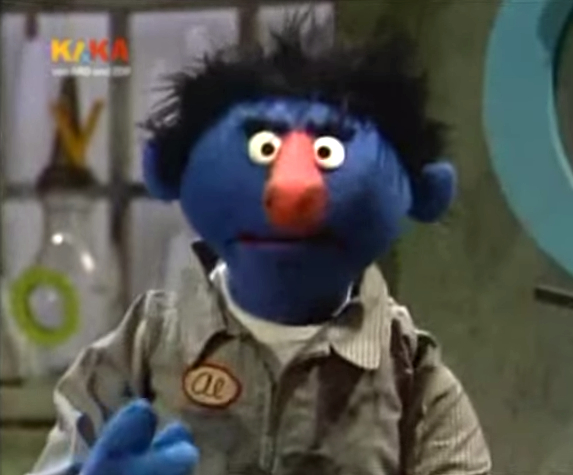 I kind of see the resemblance only in the face, just not the hair. Al's hair is messy and sticking up, but it needs a lot more work in order to look like Beakman's. Probably with the aid of a powerful blow dryer.

Yeah, minus the facials I don’t really see it.

Unrelated, but as a kid I always found the inside of his garage to be quite fascinating.
S

Yes, that garage set was really interesting, because it was fully loaded with all the letters of the alphabet scattered through out. The segment opens with the mechanic inflating, what appears to be a tire, but it's actually a letter O! Funny how there's a lot to see in Al's garage, just like how there's a lot to observe in the setting for "Beakman's World", as well.

On a side note - It should come off as no surprise that the scenic/production designer for "Beakman's World" was Wayne White, who also designed the scenery for "Pee-Wee's Playhouse", as well as "Shining Time Station". He also designed the scenery for the music video of the Smashing Pumpkins' song "Tonight Tonight", which was entirely inspired by Georges Méliès' silent film "A Trip to the Moon". White also puppeteered and voiced various characters on "Pee-Wee's Playhouse", and was one of the twin cowboys, Tex and Rex, of the Flexitoons' jukebox puppet band on "Shining Time Station".
Last edited: Jun 29, 2021

So are Elijah and Wes two new exclusively built Brown muppets as apposed to using the standard brown AM pattern? At first I thought they were made from the latter until I realized Elijah had a darker shade (as pointed out by Elmo) and I also noticed both puppets appear to have different shapes from the standard brown AM.

No, I think they custom build these new Muppets to specifically meet certain needs to convey whatever type of person they're meant to represent, much like how everything about Julia was carefully planned for her to properly represent someone on the autism spectrum, such as her floppy arms and hands so she can "flap" when she's happy or excited.
You must log in or register to reply here.
Share:
Facebook Twitter Reddit Pinterest Tumblr WhatsApp Email Link
Top