Why isn't Skeeter a Muppet?

The Scooter Puppet was referbished as a female in one episode of Muppets Tonight. So there's your Skeeter. 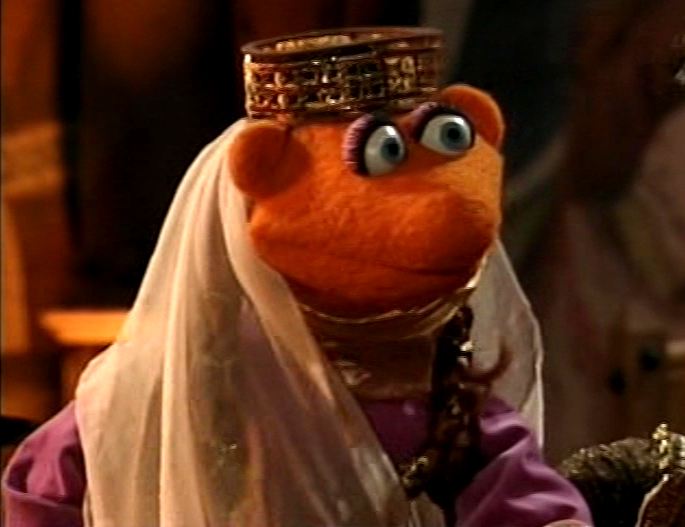 LamangoNumber2 said:
The Scooter Puppet was referbished as a female in one episode of Muppets Tonight. So there's your Skeeter.

Dang--wow, I never heard of that!

Which episode was that?

I forget the episode, but it involved the Elvesis.

This is a question that's been nagging at me for quite some time and finally I've googled it. The answer is actually pretty black and white. Skeeter is technically not a Muppet but a filler character.

The Muppet Babies was a spin off series of Piggy's 'What if we grew up together' fantasy sequence in Muppets Take Manhattan so contrary to what the arc suggests it was NOT the beginning of the franchise. The first of the live action films, The Muppet Movie which is the story of how Kermit met and established The Muppets pre-dated it.

The problem with the Muppet Babies concept was that Piggy was a terrible role model for potential young female viewers but is the only female character among the immediate portion of the Muppets. Other official Jim Henson characters were considered including Janice, even Fraggles and Sesame Street but not only would mixing franchises have caused confusion, it was decided that the second female character needed to counter Piggy. Not only to keep that bossy diva attitude in check but also to represent a defiance of gender stereotypes. Hence Skeeter was created as a twin sister of Scooter whose tomboyish style constantly challenged Piggy, it was suggested at times that she even challenged Piggy's affections for Kermit. At the same time Skeeter was established as a strong character who could stand well on her own hence the fan response to her absence from the live action films. There was a loose explanation offered by the Henson company that she'd become an explorer and disappeared in the Amazon.

You can also see a quite dark and morbid Adult Swim theory on youtube:


Janice was still given an appearance in one episode of the animated series but she wasn't received well. Her unique deep toned voice was not translatable to child form. I'd like to add that personally I felt that she also had more of a teenage appearance which is not the most believable as relatable to the Muppet babies.

So she was reduced to only making silent appearances in the 'The Muppet Kids' book series which featured the muppets as preteens as well a several appearances by Skeeter. I actually recall having one of these books as a child, it featured Piggy being dared to spray paint 'witch' on the window of an old woman rumored to be a child eating witch. I'm pretty sure I read it a million times, it was one of my favorites. I remember even getting the pages water damage from the bathtub. XD

Then in later years in the Muppet Comic book series volume titled 'Family Reunion' we actually get an appearance by an adult Skeeter who shows up at the Muppet Theater in search of a job but is later revealed to be a detective's assistant. Whether or not this is canon is debatable but just the same it can be considered a satisfying filler to that blank.

There is a way to get a glimpse at what Skeeter would look like as a live action adult Muppet in this video from a screening event of The Muppet Movie featuring what I am pretty sure is a fan made Adult Skeeter puppet:

Yep... That Skeeter puppet was made by our very own fellow forum member, puppet builder and performer, and all-around great person Slackbot. You can find more pics of her Skeeter modeled after Amy Mebberson's Boom! Studios Muppet Comics illustration in her "Puppet in Progress" thread in the Puppet Building & Performing section.

Hope this helps and have fun exploring the forums.

That's amazing, kudos to her.

Not hard to understand why not, she just didn't go with the group.

Little Robin said:
There is a way to get a glimpse at what Skeeter would look like as a live action adult Muppet in this video from a screening event of The Muppet Movie featuring what I am pretty sure is a fan made Adult Skeeter puppet:

Heh, that video does get around! Yes, that's me and the Skeeter I made. She won a prize in the costume contest at that event despite not wearing a costume at all.

When Amy Mebberson posted a picture of that puppet on her tumblr I just about died of sheer artistic validation. That said, I plan to rebuild her, giving her a better-shaped head, the next time I find myself between commissions.

LamangoNumber2 said:
The Scooter Puppet was referbished as a female in one episode of Muppets Tonight. So there's your Skeeter.

Gads, I hate that rebuild. I find it upsetting to look at. It's like they were saying "Scooter's dead, so let's recycle the carcass." ARGH.

What moment in Muppets Tonight is that shot from?