What Made you Think Today?

Well, since we don't have the frown thread anymore, I guess this could go here, but they finally have in custody the ones who are responsible for the wildfires that spread into Gatlinburg last week, and as is turns out, it's a couple of kids (or, more accurately, juvenile delinquents). See, this just furthers my lack of hope and faith in the future of our society when you see that much of today's youth does stuff like this. Considering the sheer magnitude of the wildfires that have been burning for months, as well as the fire spreading into Gatlinburg destroying homes and businesses, as well as claiming the lives of fourteen people, I believe these kids should be tried as adults, and that murder should be a charge.

Well, there are many things that have made me think recently, but at the same time they also made me very sad.
On September 28th, I lost my great uncle due to sickness. I got my Junior Ring on the 9th of November and it just made me think how proud he would be if he were still here to see not only that, but my graduation.
The same goes for my grandfather who I lost 5 years ago in his sleep. He would also be proud of my accomplishments. Incidentally, the day of his death, May 5, 2011, was also the very first time I performed on stage as I performed Iago in Aladdin Kids at my elementary school. Oh, how he would've been proud.
I love you both! I miss you!!

So many people keep talking about how the 90s was the last "truly great" decade, and I've pretty much just chalked it up to how 90s is just pretty much everybody's object of nostalgia right now since nostalgia seems to run in twenty-year cycles (ten years ago we were nostalgic for the 80s, ten years from now we'll be nostalgic about the 2000s), and how a number of Gen Y'ers would say that simply because they grew up in the 90s, yadda-yadda-yadda. But I recently read an interesting YouTube comments that actually puts some interesting perspective on just why the 90s really was the last "truly great" decade: because it was the last decade before 9-11 happened. Prior to 9-11 (including the 90s), much everybody was more relaxed, laid back, and carefree; since 9-11, however, everybody is more on edge, cautious, walking on eggshells, we feel less free, we feel less safe, we feel less secure . . . that, and the usual complaint of P.C. gone mad.

But, I guess when you think about it, and put into that perspective, then I guess most things considered, then yes, the 90s really was the last "truly great" decade.

Then again, I personally would know, but the 90s was the first decade I've lived through . . . I could agree that it was more relaxed, laid back, and carefree, but that's because I was a kid in the 90s, so what cares did I have in the world then? The 2000s were a pretty good decade as well that I can recall, save for a couple of bad years (2004 and 20016), but I will say that the New Tens have been a rocky decade for sure. At least for me anyway.

There's a number of buildings throughout my city that have really elaborate and abstract murals painted on the side by graffiti artists, and it got me to think of how if it wasn't for the side window and awning that Hooper's Store has had since Season 30, David Gallo's retro redesign as of Season 46 would probably feel more complete if it too had some sort of an abstract mural painted on the side wall like it used to: 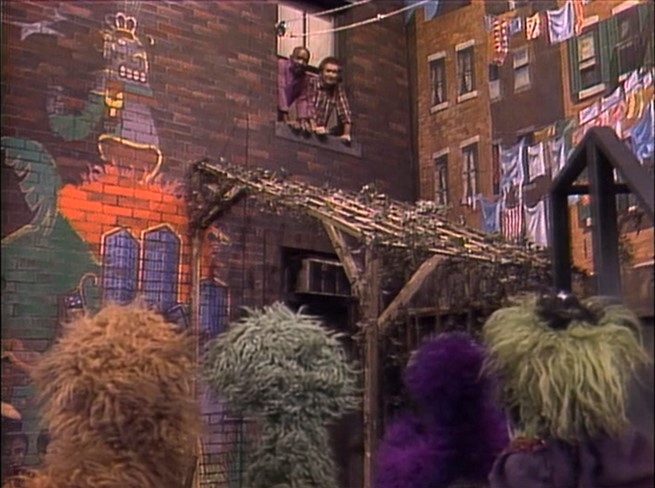 Every year around this time, I go through a spell where when I get up in the morning, the first thing I feel like doing is crawling underneath something and taking a nap: I always wake up feeling tired and groggy like I haven't gotten enough sleep (even though, most things considered, I have).

But now, it's finally donned on me why this happens: the time change! It takes a long time to adjust to the stupid time change! I can't believe I couldn't figure this out before!

Isn't Knoxville close to the borderline between Eastern and Central time?
A few years back I drove through to see my sister in Nashville and we gained an hour. (lost it on the way back East).

What if you lived right on the border? And dealing with daylight savings time? Might as well be a bear and hibernate.

Yeah, basically just a couple of counties to the west of us and the rest of the state is Central.

So I think I might know why my iPod Touch takes such a long time to download apps.