Finally. After waiting for what felt like an eternity, we finally have our trailer! Like everyone else, I'm very happy characters like Rowlf, Rizzo, and Sam the Eagle seem to have larger roles in this movie.
I also like the design of Constantine. The details like the shorter collar and the position of his eyes are subtle, but you can still tell it's not Kermit.
And I just adore the scene with Scooter singing "Moves like Jagger". Maybe it's just the silliness of it, maybe it's the other Muppets' reaction, or maybe it's because Scooter is singing a song in 2013. I can't wait for Muppets Most Wanted!

Weirdo96 said:
And I just adore the scene with Scooter singing "Moves like Jagger". Maybe it's just the silliness of it, maybe it's the other Muppets' reaction, or maybe it's because Scooter is singing a song in 2013.
Click to expand...

I'm pretty sure the Muppets' reactions are from a different scene. The editor of the teaser did a good job splicing them into Scooter's bit.

Well, lets face it ... anything with gratuitously dancing penguins is a good thing!

Love the trailer - the films going to look amazing what with all the very classic British landmarks they were shooting at - think this one will have a great MTM/GMC feel to it.

I really want to hate the use of "sequel" to describe this film in the trailer (was GMC a sequel to TMM? Was MTI a sequel to MCC?), but I like the self-deprecating approach, with the light bulbs burning out on the "BIGGER" sign.

And I have to admit I got a little giddy hearing the narrator declare "There's no sequel like a Muppet sequel" as colourful clips of Muppety goodness breezed on by. I can't explain why, but "There's no movie like a Muppet movie" revved me up big-time in the run-up to the 2011 film.

There's a lot to like here. As I've said elsewhere on this board, it looks like this film will set the Muppets free to do their thing as opposed to the somewhat-laborious process of reuniting the group in the last movie. Looks like they're doing a better job at spreading around the screen time for the cast (particularly Rowlf, Rizzo, Scooter and Sam).

And I'm giggling hysterically at the bits with Sam and Ty Burrell as the Interpol agent - Mrs. Otter and I watched The Return of the Pink Panther the other night and I can't help but wonder if Ty's character could be Inspector Clouseau for a new generation. (On second thought, Steve Martin already tried that. Ah well...we'll see.)

And, yes, include me in the camp that actually likes Scooter singing "Moves Like Jagger." It's just splendidly ridiculous - in short, it's The Muppets!

Very happy that the big publicity push is officially under way and the countdown to Muppets Most Wanted is ON!!!

LouisTheOtter said:
I really want to hate the use of "sequel" to describe this film in the trailer (was GMC a sequel to TMM? Was MTI a sequel to MCC?)
Click to expand...

It starts out where the last movie left off, so yes, it's technically a sequel.

It actually begins seconds after where the last one left off. This movie starts immediately after the 'Life's A Happy Song' finale.
I don't know how they're writing Gary and Mary off the script, since they were heavily involved in that scene, but from a recent leaked picture, you can see two people who look very much like Gary and Mary standing in. 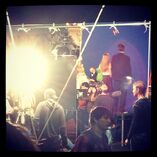 Love that tiny car gag. Also I didn't know Ty had such a main role, Im a HUUUGGGE
Modern Family show(prolly my fave show on tv) The Disney daytime teen cameos are extremely offputting, but Im hoping there won't be too many gag forced inducing pop culture references.

Rewatching it...great idea for a silly spinoff short or spoof trailer: SHARKS ON A TRAIN. Oh wait, Im guessing that's the point of the gag.

And wow, Pepe is in it. He seemed MIA in the last one despite being one of the main Muppet characters.

Also I love how they are literally at all these different REAL WORLD sites. Nothing offputs me more in Muppet films than fake sets. Its why I dont like Oz, I dont like Very Muppet Christmas Movie, and I REALLY did not like all the fake fourth wall breaking tropes and focus on the humans in the first one. This definitely looks closer to GMC than Muppets 2011 was to Muppet movie as far as direction.

Already this looks crazy bizarre, which is a big plus for me.

Was there ever a right Sam?

checks fingers to make sure none were eaten.

Just where did that shark come from anyway?