As I've said before, I've found it harder and harder to trust Steve - not because I think he lying, but because I feel like he's not telling the whole truth. Again, let's look at it logically: Disney, the Hensons, and other performers (including Rick Lyon) have all said the same, if not very similar things regarding Steve, his business conduct, and his difficulty in working with others (such as younger, newer, and less-experienced performers) . . . I honestly can't imagine that all of these parties would willingly conspire some sort of a smear campaign against Steve for no reason, so I have to think there has to be some truth to what they're saying. Steve, meanwhile, seems to always conveniently have some sort of counter-argument on his blog anytime certain new details regarding his termination are made public.

Again, I can believe he was trying to fight for the integrity of the Muppets, sure . . . but I still feel like he's not being entirely honest about his own conduct and behavior otherwise.

As much as I'd like to think that whoever wrote that twitter post about Steve is a "troll", it seems like a very stupid topic to troll about & it actually helps piece some puzzles together.

Also, we all thought that guy on reddit who said Steve was let go was a troll and look what happened.

Besides, I remember when trolls were cool. 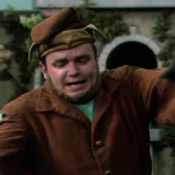 Muppet Master said:
As much as I'd like to think that whoever wrote that twitter post about Steve is a "troll", it seems like a very stupid topic to troll about & it actually helps piece some puzzles together.

Also, we all thought that guy on reddit who said Steve was let go was a troll and look what happened.
Click to expand...

Well, at least we have responsible mods who will catch people who post nasty comments and get those posts deleted and maybe banned. What made me mad at the Taco Bell Corporate Office forum was that they didn't post IP addresses or anything and I flagged that idiot's messages and everything and nobody did anything. The trouble is these "nasty trolls" realize that and think they can do whatever the heck they want. But like I said several times, this forum is more family friendly. If I had someone repeatedly calling me 'stupid' or 'dummy' here, we know that poster would get what's coming to him or her. Same thing with the old WB network message boards, back when that network was in existence. Again, I really hate to fight online, but sometimes people drag me to that point. Things like that don't happen here, so I appreciate the way this forum is run. Sorry to get off topic, but since it was mentioned I wanted to put in my two cents on the matter.

I know what happened! Disney clicked the post button for all these videos in their respective weeks, only, you know YouTube, sometimes things mess up.
Click to expand...

Well, it that's true, how does that 'splain Uncle Deadly's 'thought of the day' comments, unless they were added later?

As I've said before, I've found it harder and harder to trust Steve - not because I think he lying, but because I feel like he's not telling the whole truth.
Click to expand...

I know exactly what you mean. I want to support Steve, but the trouble is we don't know him personally, so how do we know what really happened? In a way this goes back to the Kevin Clash scandal a few years back. We're all his fans, so we support him and believe the accusations made against him were false, but without actually being there, we don't know the whole story. Like I've said before on this thread, celebrities aren't always what they seem. There's often a difference between when they're on and off screen. Again, I'm not trying to speak against Steve or Kevin, but I just wanted to post my thoughts on the matter.
Last edited: Sep 1, 2017

as far as the writers thing goes, it kinda reminds me of what I read in Jim Henson the Biography (Specifically the part when the work on SNL) on how the writers for SNL were having difficulty writing the land of Gorch sketches

The only person I trust at the moment is Mike Quinn who's been defending Steve on his blog and saying that he's a wonderful friend and has worked with him for years, and even said anyone he talked to praised Steve.

Anyone else I ignore. Even Disney and the Hensons. No matter how hard it pains me to say that.

They say the truth is in the eye of the beholder.

It's so weird how they've been doing MTOTW all this week. here's one with Miss Piggy and Lew Zealand.

Even though I'm not crazy about Matt's Kermit (not yet, anyway), he does a spot on Lew Zealand!

I love Deadly's little "I won" at the end of that video.