D'Snowth said:
I noticed it seems like for a period in the early and mid 80s that the cast wore the same outfits for multiple street scenes and inserts.
Click to expand...

Maybe it's me but it seems like Luis wore the same orange shirt in both episodes 406 and 536.
M

For years I figured the skecthes where Bert and Ernie go to egypt and the jungle, respectively, based solely on the fact that they wore explorers hats and jackets in both sketches. But then I watched recently, and noticed that while the explorers clothes were the same, the puppets were different in both sketches. Maybe new puppets were built while older ones were being used, but even then I wouldn't expect them to use one set of puppets and then put the jackets/hats on the other set of puppets in the same day (I wonder how much trouble it takes to change a Muppet). I guess it might be possible that maybe one of the puppets wore out or something and a repalcement was needed, but could that happen to both on the same day?
M

I used to assume that all four People in Your Neighborhood segments from the first season were shot on the same day, since they all feature Bob. Only three of those four have surfaced so far, but in addition to Bob being in them all, they all feature the same Anything Muppets (Fat Blue and Pumpkin), and they all feature Jim Henson (as the fat blue one) and Frank Oz (as the pumpkin AM), with the same voices (though they very easily could have switched puppets or changed voices). But as I watched the three that have shown up, I noticed that Bob's shirt is different in all three of them. Would it have been odd if they had Bob change shirts for multiple segments shot on the same day? Of course they would have had to take the time to change clothing on the Anything Muppets (though the fat blue one wears the same outfit in two different sketches, whether he's a postman or a garbage man).
M

I wonder if the sketch where Ernie cleaned the apartment in 15 seconds was shot the same day as the one where Ernie and Cookie Monster plan to trick Bert by having Ernie ask if a monster plays the flute when a bell rings. In both segments, Bert is wearing a watch, something he doesn't normally wear. It makes sense in the cleaning segment because he's timing Ernie. So I think either they were shot on the same day, or they forgot to take Bert's watch off right after taping that sketch.
M

I've often wondered if the first three "Bert and Ernie at the movies" segments were shot on the same day. The "loud and soft" and "lady with tall hat" segments both have many of the same extra background characters, though in different seats, while the "emotions" one has mostly different additional characters, so maybe that one was shot on a different date than the other two. But now I think those earlier "at the movies" segments were shot on the same day as the Sesame Street News segment where Kermit asks people what makes them angry. Most of the characters in that segment (whether they get lines or not) are also movie theater customers, most of whom are anything muppets with the same clothes and facial features. Grover appears in the News segment and at least one of the movie theater ones (wouldn't it have been something if Kermit was at the movies with Ernie and Bert?).

I believe all the characters from that particular news segment (except for Kermit) is a customer in one or both of the movie theater segments, while most of the theater customers are in the news segment (only Bert, Ernie, the usher, and the lady with the tall hat are absent from the news segment).

After watching both "Amigo" and "Kids Just Love to Brush," I'm going to venture that those were taped the same day, given that at least three of the exact same pink mini-AMs (including Betty Lou) appear in both (and both songs were written in 1984).


Yeah, I know, I just bumped a five year old thread with something trivial, I'm a troll.

This is a good reference tool to look at:

I feel like these two were taped the same day since it has the same group of characters.
D

I will admit, I'm surprised to learn that "Amigo" was actually from the 80s; given the use of Fran's somewhat generic Betty Lou, among other things, I would have assumed it was from no earlier than the mid-70s.

At the same time, though, now that I think of it, I think I can see how the Carlos AM could also be easily modified with mouse ears, nose, and whiskers for those Miami Mice bits that were most definitely 80s. 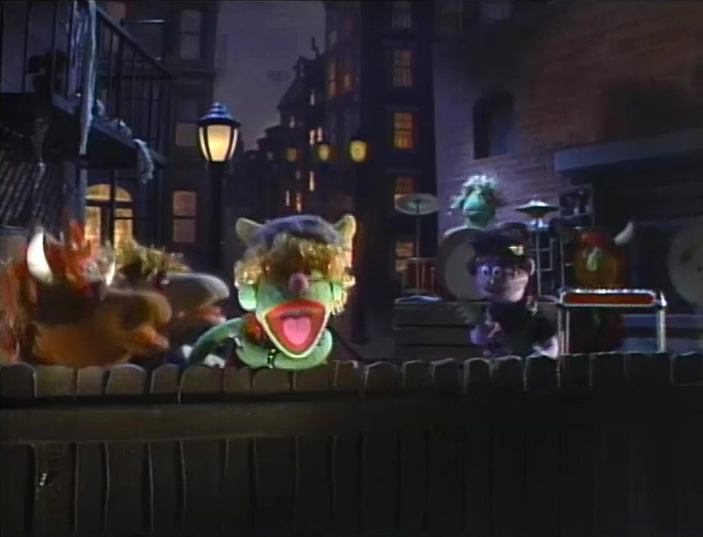