Like many of you, I'm still trying to find the words, but remain speechless. I found out about this devastating loss on what has become yesterday afternoon, and even now, am overcome with deep sadness. With it are feelings of frustration and disbelief - I've since been asking myself, "How...?", "Why...?", especially "Why?" I mean, I know why, and it shouldn't be hard to believe as this parting, like the ones before, was inevitable (his age by all means had caused concern). In the same vein, it feels as though it happened too suddenly. Ultimately though, it's a fate we all at some point will have to endure; just the way of the world.

Similarly, the way of the world had shown when we lost the one who started it all...well,...not exactly "we" - I wasn't even around at the time Jim had passed, yet my profound grief for both losses is alike. And...despite my not being there then, I'll admit that I've been experiencing a strange feeling throughout these almost-24 hours. Bizarre as it sounds (*and it's hard to put it in the right words, so I sincerely apologize for any confusion), I feel as if I've been (and am still being) impacted by the effects of Jim Henson's passing, as if HE was the one we just lost and not Caroll. To clarify, once I'd learned about Jim and his work, I definitely did feel those effects, but (likely) in a different way...different from those who witnessed it and heard of it when it actually happened, who were physically around, existing (*again, I wouldn't come along until several years after...). I'm not quite sure why this is - perhaps now that I'm here to acknowledge and react to such occurrences, I can say at this point that I physically and mentally understand the feeling (?) That said, I thought I should ask; all who were around then, does the loss of Caroll evoke those same feelings/sensations that you felt when Jim went? When Jerry (Nelson) went? Honestly, these inexplicable thoughts and emotions brought to mind Caroll's performance as Big Bird singing "Bein' Green" at Jim's memorial - a heartfelt, touching tribute (*Notice : I didn't include the link to it here so as not to make anyone sad, as we're all already grieving - I'd feel guilty adding to it).

To conclude, I'd like to end this tribute on a few positive notes - my favorite Big Bird moments might be: if I had to pick one (*and the choice is tough), maybe the (Sesame Street) episode where Ernie sleeps over - at a close second is Big Bird introducing Snuffleupagus, and following at third is his entire scene with the Swedish Chef in "Muppet Family Christmas". It's equally hard to pick a favorite Oscar moment, but it might be him singing "I Love Trash", followed by his playing off of/bonding with Slimey. Moreover, life unfortunately never granted me the opportunity to meet Caroll, however, I hope he, Jim, Jerry, Richard and the others have (re-)congregated dimensions away, nonetheless. Thank you to Sesame Street, for teaching the alphabet, numbers; basically building the fundamentals (many thanks as well for inviting Caroll to help celebrate 50 years). Thank you to Jim, for Sesame, the Muppets, Fraggles, fantasy worlds, and everything in between. Lastly, thank you to the extraordinarily talented, warmhearted, and unforgettable Caroll Spinney, for the laughs, tears, memories, essentially our childhoods, he will be dearly missed - may his legacy live on for generations to come (Caroll Spinney, 1933-2019).

Something tells me that we all may want to pay attention to the tv today as it seems like the morning shows are talking about Caroll’s death.

MikaelaMuppet said:
I was hoping he would make it until his birthday, but he didn’t.
Click to expand...

It would have been wonderful if he could have made one last Christmas, let alone one last birthday, as they were both around the corner. So very sad that anyone should have to die around this time of year.

By the way, I made special mention of Caroll in this thread https://muppetcentral.com/forum/threads/rip-tms-guests.50422/page-13

Spinney's death may have been sudden, but I am not surprised, considering I learned about him having health issues a year ago when it was revealed he was retiring.

I am not sure how many Sesame Street muppet voice actors/actresses from the first 15 years of the series is still alive today. I know Frank Oz (voice of Bert, currently semi-retired) and Fran Brill (voice of Prairie Dawn, who retired in 2014) are definitely still alive.

I wasn't that big a fan of Big Bird at any point in the series due to his overexposure (even during the era in which Elmo had taken over as the most overexposed Muppet and weakened Big Bird's exposure a little bit, I still had little interest in Big Bird), but there were three Big Bird moments I really enjoyed greatly. One of them was the "Disco Snuffy" sketch, where Big Bird and Snuffy were imagining what a disco looks like, and in fantasy, the nest area is transformed into a discotheque, and Snuffy becomes interested in learning to disco dance. Now that was a pretty awesome segment involving a big character I had very little interest in, especially when I enjoyed disco music since I was in pre-school or kindergarten.

I also enjoyed the moment where Big Bird learned that Mr. Hooper had died, and Big Bird had no understanding on the meaning of death. Another Big Bird moment I enjoyed was when he was involved in the New York City marathon, which Gordon participated in. I especially enjoyed it a lot when Big Bird and Snuffy approached a stop sign and didn't have any idea on how to respond, and it makes sense as to why there have been two, maybe three segments focusing on the word "STOP", including the "Say the Word" game show.

Off-topic, but the episode with Mr. Hooper's death revealed was not the first time death was referenced on Sesame Street. Earlier in the series, there was a Bruce Cayard-animated skit involving a girl talking about a goldfish who died.

Carroll Spinney was devastated about Hooper's death in 1983. 36 years later, they are now reunited in that big cul-de-sac in the sky.

CBPuppets said:
In honor of Caroll Spinney, I have drawn this! 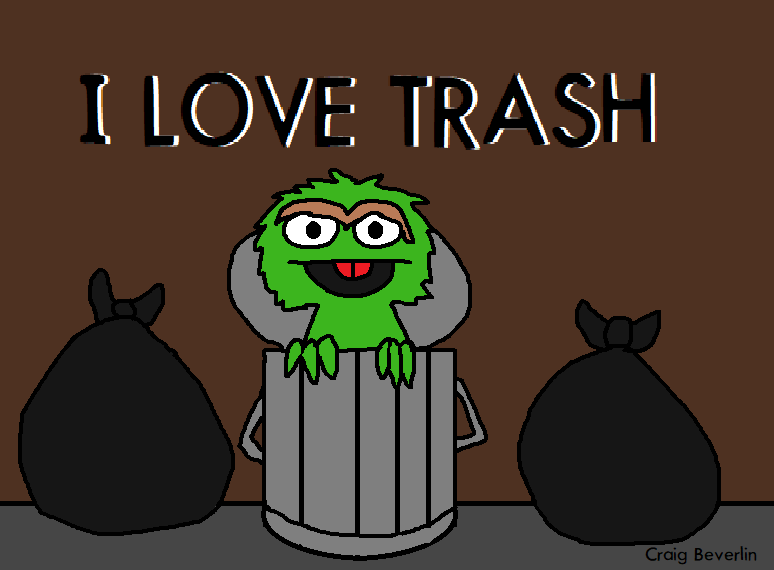 Just want to ask, where did you get the font for the "I LOVE TRASH" phrase? it looks so very true to Sesame Street, considering the "I" has serifs, unlike with the Futura font.

mariolover said:
Wow, it's amazing you can remember an episode when you were only 1-2 years old.
Click to expand...

No, I saw it on a 20 inch RCA black and white tv. With big rabbit ears and crappy reception. We didn't have color for another year. Cable didn't exist yet.
Do you know how many channels we had back then? Seven. The only reason we had that many channels was being so close to New York City.
Like I said, color tv was a luxury. Cable wasn't invented yet. No VCR, no DVD, no On Demand, no nothing. There was this meme someone posted of all the things that didn't exist in 1980, let alone 1970. No cable, no microwaves, no cell phone- heck, our phone was mounted on the kitchen wall and get this! No push buttons, you had to use a dial tone.
Don't look at me like that! These were caveman days!

One other thing I always admired, playing Big Bird and Oscar wasn't the easiest job, but Caroll made it look so easy.
Oscar's trash can was so small and cramped, there was only room for him back there. That's why you never saw Oscar's right hand.
Big Bird occasionally was on roller skates, but even more impressive, he could also ride a unicycle. I've tried it once, and it's not that easy keeping your balance. Imagine keeping your balance, wearing a heavy costume, having such a narrow field of vision, AND keeping your right hand raised. Now ride a unicycle and don't fall off. That takes some doing.

I also enjoyed in the first season Caroll joining Jim and Frank with the Anything Muppets. Occasionally Caroly Wilcox or John Lovelady might help out. But until Jerry, Richard, and Fran showed up, Jim Frank and Caroll were IT.
All the more power to him.
You must log in or register to reply here.
Share:
Facebook Twitter Reddit Pinterest Tumblr WhatsApp Email Link
Top