Thanks! I also have a big stuffed Kermit (Which my aunt tries to steal every time she visits, but I solved that problem by putting him high up, ontop of the rod things for the curtains in my room
G

TheWoodringman said:
Thanks! I also have a big stuffed Kermit (Which my aunt tries to steal every time she visits, but I solved that problem by putting him high up, ontop of the rod things for the curtains in my room
Click to expand...

I have a big stuffed Kermit too!

But no one tries to steal him though.

Manegirl79 said:
Um... hi! I just signed up tonight, after posting TWICE of me saying "hi", without seeing the big thread that said "Introduce yourself New Members!" here! Gosh, I miss the obvious, dont I? I like to play video games, like Mario (here's hoping that new Paper Mario is good), Zelda (is Skyward Sword any good?), Pokemon (lovin' B/W!), Okami (Darn it Digging Minigames! Y U SO HARD ON ME?!), and Fire Emblem (only played Shadow Dragon so far. Going for a "No Deaths" run. It is HARD!). I like watching obscure TV shows like The Critic (It Stinks! Not really.) and movies (The Brave Little Toaster films, Herbie The Love Bug films), and want to become a Game Designer someday. I also want to play an obscure video game series called Mother someday. You might know one of the games already: ever heard of a game called Earthbound? an RPG that came out in 1995, that wasn't very popular in the US?

My Muppet Knowledge is limited (aside from what a friend of mine has told me, whom I consider a Muppet Expert), but I want to learn more. I've only seen The Muppet movie, part of The Great Muppet Caper, and The Muppets.

I know right off the bat, that I have atleast one friend on here already. So, I'm not completely alone. Caitlyn Childress? Animatedc9000? Do you read me?

Welcome, Manegirl79! My name is Nelson, and I like Mario as well. As far as videogames go, Sonic the Hedgehog is my favorite. Is there really a NEW Paper Mario game coming? Also, my favorite muppets are Scooter, Fozzie, and Gonzo. Anyway, this is about you, not me ( I can be a bit selfish at times.) So, welcome to the forum! Hope ya have fun!

Yes, for the 3DS. Which I do not have. Still need to beat Super Paper Mario myself.

hi all! great to be here on one of the coolest forums on the web.
i love building puppets and performing. grew up on the Muppets- (yep, i'm that old)
excited to meet some of you all and encourage everyone. it's a small world after all! if you get a chance, check out my fb page Joy Filled Puppets, and check out my blog, which I am going through the process of building a purple monster puppet- http://joyfilledpuppets.weebly.com/1/post/2012/01/first-post.html
i'm going to go look through the forums right now, at some of the wonderful stuff you all have been doing!
-Kimberly 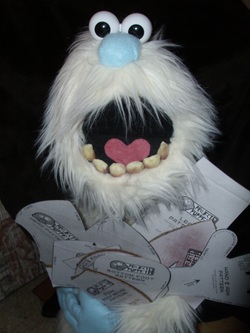 Welcome Kimberly. Hope you have fun here. I love your puppet. You should check out the puppeteers' area.

thanks! i know it'll be fun to hop around and talk to others and learn some new things and enjoy all the pictures.

Uh...No. (Psst. If he seems to be asking you a question, the safest answer is ALWAYS no!)

Hey, everyone! New member, but long-time Muppet fan. I've loved Jim Henson and his creations for as long as I can remember. Some of my strongest and most beloved childhood memories involve his work... specifically "The Great Muppet Caper" and "The Muppet Movie" (as those were some of the few VHSs we had) and listening to our vinyl record of "The Frog Prince" over and over and over and over and over and over again with my big sister and dancing around/acting it out. Loved the Dark Crystal and Labyrinth, too, and I loved that Henson was working on the turtle costumes in the live-action Ninja Turtles movie (I loved the TMNT, too!)
I was pretty much convinced that I was going to work for Henson, since art is all I wanted to do. I loved building puppets and drawing pictures. My little world was crushed when he died (I was 9 years old - I remember so clearly where I was when my Dad told me the news, and the heartbreak I felt) and I think that my dream of doing art for a living died with him.

Because what could possibly be as cool as working for the Jim Henson Company (and, I thought at that time, the man himself, since *surely* he would still be alive by the time I was grown up enough to work for him!)? The company just didn't seem the same after that, and my Muppet-love went slightly more dormant for much of the next two decades (though I always loved Muppet Christmas Carol and remember seeing Muppets From Space in the theater. I was always hopeful about new Muppet projects being awesome again, though I must say that the Muppet Wizard of Oz and Very Merry Muppet Christmas movie left a bad taste in my mouth). The new movie, however, has brought it ALL raging back, and I love the feeling of being really excited by the Muppets again.
While I don't do art professionally, I still love to draw for fun and am currently on a big Muppet fan art kick. I've been posting some of it to the Fan Art threads, and I hope you enjoy them. I look forward to participating here!