One other thing I will say too is this: I think we could all argue that Courage did, indeed, have something of a proper series finale with "Remembrance of Courage Past/Perfect" since it gave us a flashback as to what did actually happen to Courage's doggie parents, and why he ended up abandoned as a pup . . . but, given the events of this movie, it does feel like that regardless of the ending episode of the show, this really is like the ultimate conclusion to the entire premise of the show (which, again, makes me feel like Dilly would not have wanted to go in this direction).

Forgot to mention another pet peeve I had during this film that they made Courage face his fear of going home via the crops by being BRIBED with food? Really? The writers clearly wanted Courage to be another Scooby.

1. As for Shaggy making the speech instead of Courage, that much I can see, because there's been a time or two on the show when another character has made a similar speech in that vein that left Courage clueless and confused, so that seemed in-character to me (i.e. the Magic Tree of Nowhere telling him "Anything worth its value is worth fighting for," to which all Courage could respond was, "Huh?")
2. I had that exact same thought in "Courage Meets Bigfoot" when the mention of having pie prompted Courage to happily accept and say "Who can worry on an empty stomach?" feeling very much like a Scooby thing, but yeah, the whole "Courage Snacks" bit played like how Scooby and Shaggy can easily be bribed with Scooby Snacks (which Daphne actually lampshaded to Muriel) was one of those gags that actually didn't work in the context of Courage).
D

Getting to meet Marty Grabstein was such a real treat, and I honestly have to say that, so far, of all the people I've gotten to meet at these cons, he was certainly the warmest and friendliest I've met yet . . . he was very much like a big teddy bear of a guy giving out hugs to everyone he met, and yes, I got a hug from him as well. He was so funny too, I even cracked some jokes with him, such as when he mentioned after he met with the guy in line behind me (who was the only one left in line at the time) that he was taking off for "the green room," or which I asked, "In your case, wouldn't that be the pink room?" "Get over here, smart guy!" he said afterwards when we had our picture taken.

He was actually quite surprised to see I had a copy of the 20th anniversary book that Dilly published (he has one as well) and wondered how I got my hands on it, so I explained to him that it was a limited edition perk if you made a donation to Stretch Films while Dilly continues working on HOWL IN YOU LOVE ME. When he saw Dilly had signed it, Marty said he'd "one-up" Dilly by not only signing it, but personalizing it as well, which he did with his Pink Badge of Courage:

So yeah, it was another great experience, and I was so glad he came to town.

Wow! That is amazing! You'll definitely sleep like a baby tonight!
D

Like a baby in pajamas and sheets that were laundered with Muriel's homemade fabric softener.

I remember one year as a kid, I was inspired by an ARTHUR episode in which Arthur made his own Bionic Bunny calendar where he drew something cool for each and every month to draw my own Courage calendar.

Obviously, I don't still have it anymore, and I can't even remember just off the top of my head what I drew for each and every month, but to the best of my memory, I did. . . .

January: I think Courage vs. Snow Man, IIRC
February: Courage having cut out a paper heart and wanting to give it to Muriel for Valentine's Day
March: Courage planting a potted flower in the yard for the beginning of spring
April: Painting eggs while wearing a pair of bunny ears for Easter
May: Courage being set free from school by the brain alien from "Car Broke, Phone Yes" since school is over for the summer
June: Courage about to devour a giant birthday cake since my birthday's in June
July: I honestly don't remember, but I would assume it'd have to relate to the 4th of July
August: Courage cowering in fear over a towering stack of homework for back-to-school time
September: Courage watching a single leaf flutter in the air for the beginning of fall
October: Muriel taking Courage trick-or-treating for Halloween
November: All of the major characters sitting around the dinner table for Thanksgiving
December: Again, I honestly don't remember, but it surely would have something to do with Christmas

Wow that's actually sounds like a cool calendar you did there.

Made a re-creation of the end credits of Courage.

Did the best I could: 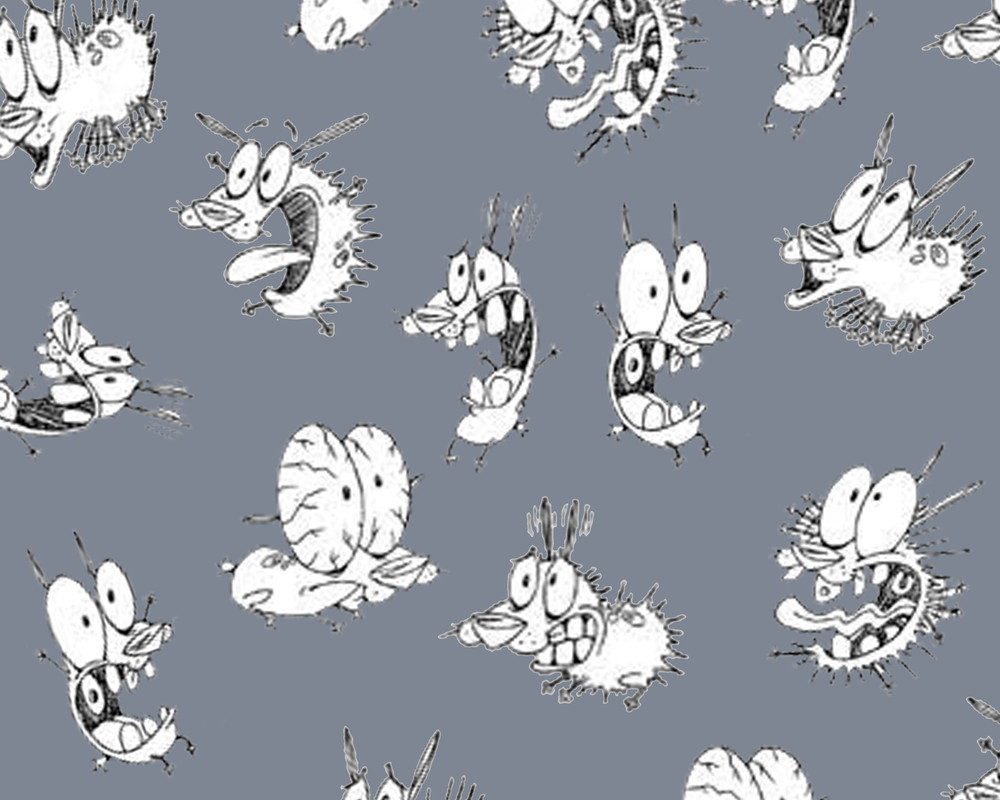