He got those season 1 and 2 shows from Myspleen when some idiot thought it was funny to upload those two seasons from illegal AAPB downloads when the website (Myspleen) is extremely strict about content that is uploaded there.

I personally spoke to that uploader, and while I don’t condone his uploads, he said he takes full responsibility if something happens so I at least appreciate he has a mature understanding about it rather than another person uploading said material being like “WAAAAAAHHHHHH IT’S UNFAIR THIS MATERIAL IS RESTRICTED!!!!1111!!!!!” and what have you.

On the subject of “The Word” however, that one honestly has to be my favorite Beatles cover next to Yellow Submarine. I love that funky disco melody it has to it.
M

LittleJerry92 said:
On the subject of “The Word” however, that one honestly has to be my favorite Beatles cover next to Yellow Submarine. I love that funky disco melody it has to it.
Click to expand...

Yeah, that wasn’t particularly high on my wishlist of rare clips to see (not even for proto-Monotones), so I am surprised by how much I liked it.

The pre-cursor Monotones played a factor, but I honestly just love the original song so much and I was surprised one of their more underrated songs got a cover (with a much catchier melody at that).
C

Check out Alaina Reed (Olivia) singing in this segment which first appeared in Season 8 and, strangely. only appeared on seven episodes, the last being in Season 11.


Who besides me thinks of Donna Summer when they hear this? Thanks.

Also, be sure to check out this one, which I've never seen before. This likewise was shown only seven times (or thereabouts), and only appeared in Season 2, before I started my 'viewing days.'


The music, at least to me, sounds like a cross between an early version of the Who and the Association (both 1960's musical groups). Would anybody agree? Thanks again.

It really just translates to this in the end: 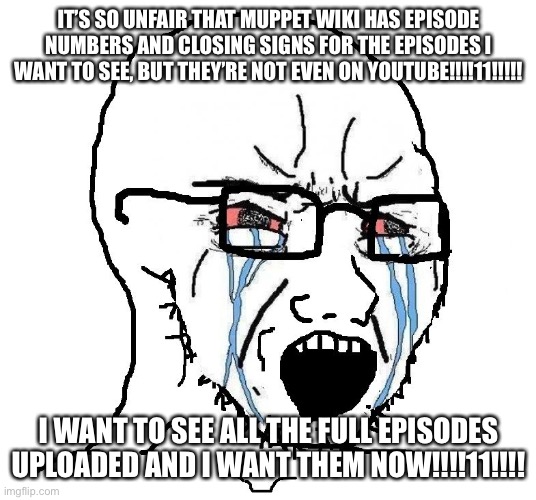 The above manifesto brings to mind so many unanswered questions. To wit:

There have been screencaps of publically unavailable episodes online for years. Has he only just noticed?

Also, why the befuddlement over the lack of access to those specific episodes and not the hundreds of others? His video seems to expect that other fans would feel the same way about this very specific subset of episodes. Why would that be? Am I missing something?

Thirdly, there seems to be this underlying notion that if media isn't on YouTube, it doesn't really exist. Frankly, this opens up a larger debate about the nature of reality and whether film history as we know it actually occurred or is simply a figment of our collective imaginations, since YouTube wasn't actually created until 2005.
You must log in or register to reply here.
Share:
Facebook Twitter Reddit Pinterest Tumblr WhatsApp Email Link
Top