What Made you Think Today?

heralde said:
I just want you all to know that no matter WHO wins today...I won't be celebrating.

If Hillary wins, I'll at least breath a sigh of relief. If Drumph wins . . . well, it'll be like what Drtooth just said in his previous post:

Drtooth said:
I'd rather be lightly annoyed at politics as usual than fear for my life under a dictatorship, especially a self inflicted one.
Click to expand...

When the Tea Party movement attracted angry, hateful types that called Obama Hitler (oh, the irony is just thick enough to cut through with a saw) and believed the birth certificate thing that was spread as an unfunny, passive aggressive joke by humorless Conservatives on a message board somewhere, The Tea Party heads (groomed and not crazy looking) went on television to say "oh no. Those racist types aren't us."
Click to expand...

Yeah, ever notice when the right is only funny when they don't even try (a la Sarah Palin speaking at Drumph's campaign rally in Iowa that SNL accurately mocked because it was hard to tell whether she was giving a speech or doing stand-up), but when they actually try to be funny, they're not? Have you see this attempt at a meme Faux News came out with last week? 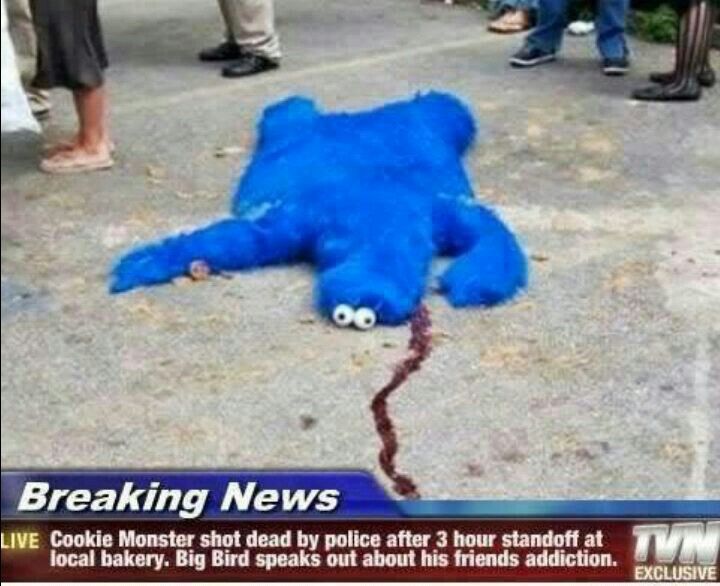 Funny, I thought it was the right that was always saying Blue Lives Matter.

I don't think our lives would be in danger either way. And I doubt people living in the Middle East, etc. would be remotely empathetic to our First World complaints.

D'Snowth said:
Yeah, ever notice when the right is only funny when they don't even try
Click to expand...

Well occasionally also when they make fun of PC culture. The Left is never funny when they start worrying about offending people who probably don't even exist.

And btw, Bush was compared to Hitler too. Again, neither party is especially mature or known for their sense of perspective.

Well, now I actually do have a reason to celebrate:

D'Snowth said:
Well, now I actually do have a reason to celebrate:

Yay! That's who I voted for (of course I did, i'm obsessed with Big Bird).

D'Snowth said:
Well, now I actually do have a reason to celebrate:

Now THAT'S a sigh of relief!

Pig's Laundry said:
Yay! That's who I voted for (of course I did, i'm obsessed with Big Bird).
Click to expand...

Me too. The way I saw it, Piggy was the conservative ticket: only in it for herself; Big Bird was the liberal ticket: in it for everybody. Big Bird likes to make friends and help people, that makes him far more ideal than almost anybody to be president.

heralde said:
And btw, Bush was compared to Hitler too. Again, neither party is especially mature or known for their sense of perspective.

I do blame the left for that one. They actually have a case with Drumph, as his rise mimics the heck out of the rise of Hitler. Some of his supporters are shouting the same Germanic trigger word for "lying press" that Hitler's followers were saying. That's scary. Saying both parties are equally terrible when a small, yet frightening portion of one's base is photoshopping people into Gas chambers is a bit much. I can say Drumph's going to be a terrible president all I want, but the fact of the matter is, it's not so much his presidency I'm afraid of as his worst followers. He doesn't denounce them, he doesn't single them out and tell violent ones to vote for someone else. Sure, his handlers sent a weak apology letter in his name saying that he officially doesn't stand with them, but you can tell that was for show. He's well aware that he rose on the backs of the disenfranchised that are fed the same Nationalist lines of bull instead of saying "rich people are corrupt douchbags who'd sell you all into slavery for 25 cents, and I should know cause I am one," it's the all purpose various brown people are either taking your jobs, stealing your tax money through welfare, or threatening to force your same beliefs with a different name slapped on it. When you're ticked off and miserable enough, you start to believe things. Heck, I was even suckered into the "Mexicans are taking all the jobs" bullcrap at one point because of someone I no longer talk to who was also going through crap, and I regret the freaking heck out of it. You don't let your darkness get the better of you, or you lose your soul. We simply can't allow any political party to thrive with dangerous, violent, and hateful followers. Everyone needs to step back, realize there are important warning signs, and stop being so darn impartial. Voter apathy and false equivalency are tools that can easily be exploited as much as friggin losers that peaked in High School being P.O's their crappy jobs are so crappy. Brexit wasn't passed because the vast majority of British voters ran to the polls and said "HEY! This is a self inflicted massive recession that we'll struggle for years to climb out of if anything." It was passed because a vocal minority of uninformed, poorly educated with crap jobs who believed racist propaganda were the only ones motivated to vote. Once it passed, their economy tanked, everyone instantly regretted it. And the best part is, unlike our presidential race, it wasn't even a binding resolution and the freaking Parliament didn't need to pass it. So the Prime Minister resigned, and everyone else involved made stupid monkey faces realizing they had no freaking plans beyond passing it.

Do we really want that?

And suffice to say, one of the friggin idiots that was behind the Leave the EU movement was a staunch British supporter of Drumph. And looked like him.

The country is close to either losing its soul or just going about business. Sure. Politicians can't fix everything. That's on us. WE have to be the instrument of change, and blaming the government for everything still sounds like it comes from a homeless guy who's been out on the street his entire adult life because he dropped out of school and doesn't want to work. Yeah, I've heard the special little snowflake Indie voter "it doesn't matter" crap every election since Bush. I can't say I disagree with most of it, but thinking that a third party is anything but a spoiler vote guaranteed to give the right more electoral votes is just as idealistic as believing in the two party system. They're corruptible, they know they're causing damage, they don't care. They want to say "I'm making a statement that no one's going to hear or care about during the election, but disappear when we could really make a difference outside the system."

This is not business as usual. This is no time for writing "George of the Jungle" in the write in space. Either we have a sustainable small mess or a huge disaster. No one's ever going to get 100% what they want because that's not how life works. We have the chance to crush a Madman supported by a small amount of dangerous people who would otherwise stay home and make horrible comments on Cheerios commercials on Youtube (where they BELONG). We don't have to be happy with our choices, but we can respect that the most amoral politician ever can go back to whining like the entitled little chickens*** he is will be more than worth having a typical politician doing typical politician stuff.

And in the end, if nothing else... Drumph is going to throw the most epic, childish, hilarious temper tantrum ever and we can all laugh heartily at his failure and the awaiting bankruptcies and fraud law suits he's been avoiding. That is going to be sweet. We cannot deny the world a massive Drumph ego smashing loss because "they're both equally awful."

Drtooth said:
Some of his supporters are shouting the same Germanic trigger word for "lying press" that Hitler's followers were saying. That's scary.
Click to expand...

They are ugly words, but they are just words. Those types were made laughing stocks long ago. I'd say Bush is worse (for the moment) because he arguably did actually get people killed.

And my being Independent doesn't mean I can't recognize when someone's a Nazi, thank you very much. That's an overreaction on your part.

The fact that the American Neo-Nazi Party and the KKK have made it abundently clear that they support Drumph seems to me that it's not at all an overreaction. I mean, heck, for the longest time, the Republican party has virtually been run with dictatorial fascism: their way, or no way. Again, for the past eight years, there's so much Obama could have done to improve the country, but it wasn't what the Republican-controled House wanted, so they blocked him at every pass (though "Obamacare," somehow, got through, even though they've been fighting against it all this time). As I've said before, the biggest difference between the Republican and the Democratic parties is that Republicans are always only in it for themselves, Democrats are in it for everybody. Unfortunately, as times have gotten worse, the Democrats get caught up in fighting with the Republicans because the Republicans always instigate the fight to begin with - this is why I'm saying it's high time, no, it's past time the two parties stop fighting among themselves, and do what they're supposed to do: try to improve the country for the American people.

D'Snowth said:
The fact that the American Neo-Nazi Party and the KKK have made it abundently clear that they support Drumph seems to me that it's not at all an overreaction.
Click to expand...

Again, it's not 1922. They are a joke. Don't give them more credit than they deserve.

I mean, heck, for the longest time, the Republican party has virtually been run with dictatorial fascism
Click to expand...

Again, no offence, but that's an overreaction. We have no idea in America what living under fascism is like.

Both parties behave in such a manner.

Heck, I'm an Independent, and because I'm not a Democrat, I'm being told I don't take Nazis seriously. I rest my case, lol.

Again, for the past eight years, there's so much Obama could have done to improve the country, but it wasn't what the Republican-controled House wanted, so they blocked him at every pass
Click to expand...

the biggest difference between the Republican and the Democratic parties is that Republicans are always only in it for themselves, Democrats are in it for everybody.
Click to expand...