The j3h action figure photography, collection, display and whatever thread

Thanks Telly!
Thanks Dearth!

Dearth, the brick sheets are from Mott's Dollhouse and Miniature Shop and measure 11¾" x 15¾"L . http://www.minishop.com/motts/shopexd.asp?id=67005

My stage area is about 13" x 17"...so yeah, there are seams, but I've done brick work dioramas before and have some experience at hiding the seams (I've made quite a few different displays and photo serials for DC direct figures such as http://www.vicsage.com/fanfic/qs/ )

Can't wait to see some of your pictures with the Vincent Price figure Dearth, especially with the episode accurate backdrop you have!

a whole bunch of pirate goodness arrived from ebay this week, so after 1 or two more pieces arrive, I'll be changing my stage scene. The biggest task will be coming up with a backdrop.

j3h said:
a whole bunch of pirate goodness arrived from ebay this week
Click to expand...

Gah! I bet you're the one who bought that Park-Pirates "Treasure Keeper" figure I had my eye on.

LOL, I should have kept my big mouth shut over in Bellygrub's Jules Verne thread!

wow.. just wow.. i am so gonna have to get my hubby to help me build a big stage set now.. (ok, will have to wait maybe a year til we can reclaim our basement and built the home theater.. kids and grandbaby are living with us for a while, so currently have no where to set it up... but we can start planning!)

I asked Gonzolover85 if I could repost this private message exchange between us since I've gotten a few similar questions about the brickwork and I have no problems trying to help anyone out...

Firstly, I greatly admire your work on your backstage/stage playset. It's just spot on, and I'm greatly impressed.

Second of all, I've got a couple questions for you. Could you show me some close ups of the seams on your brick work. I've actually ordered some of the same stuff to put on the back wall of this instead of having the curtain hang down. I'm just curious as to how to got your pieces to sit together a seamless as possible. Also, another problem is the back wall is 17"x29". Just slightly bigger than 4 sheets of brick put together. So my other question is: what did you use to trim your brick work? Dremel? Hack saw?

Any advice you could give would be greatly appreciated.
Thanks,
GonzoLover85
Click to expand...

I took a few quick pictures of some scrap brick work to show you how I try to hide the seams:

First I only use sicissors and/or and exacto knife...nothing fancy at all. One sheet I cut right on the edge of a row of bricks, right along it's bottom edge.
http://i33.photobucket.com/albums/d6...s/bc7d2556.jpg

This now will overlap the top row of bricks on the next sheet (since it's hollow back, it fits nice and snug) :

and here's how it looks untouched:

with some minor paint touch ups (and better cutting than my quicky demo rush job here), it hides the seam pretty well, including the one right on the brick (if you cut it not mid brick, it' comes out much better obviously).

Hope this helps you!
-j3h
Thanks for the compliment and checking out my work! 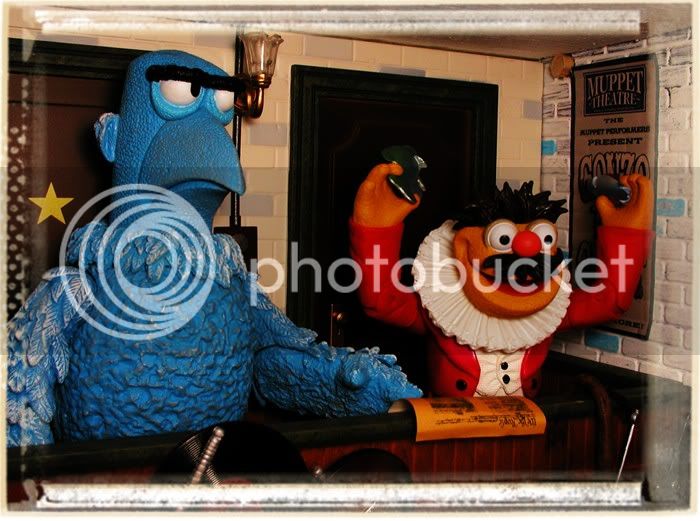 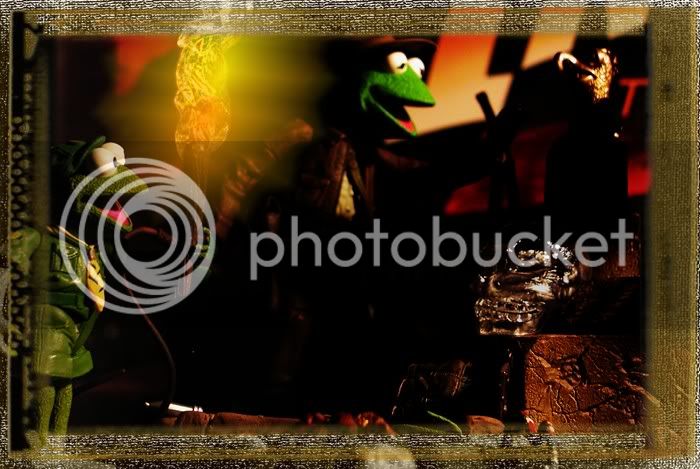 Gonzo has a message for the WWE and their fans 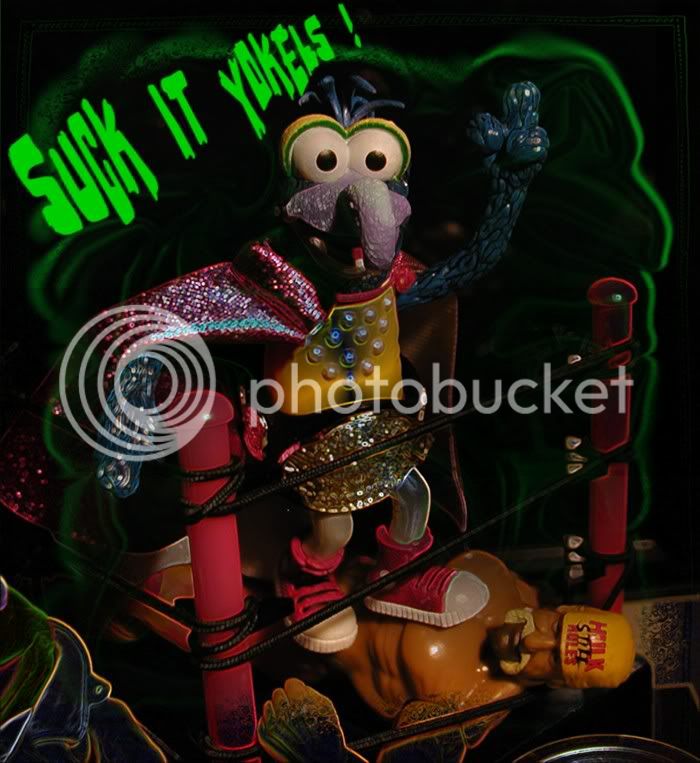 And a full "neon" version of that last one, just because I thought the layer by itself looked nifty 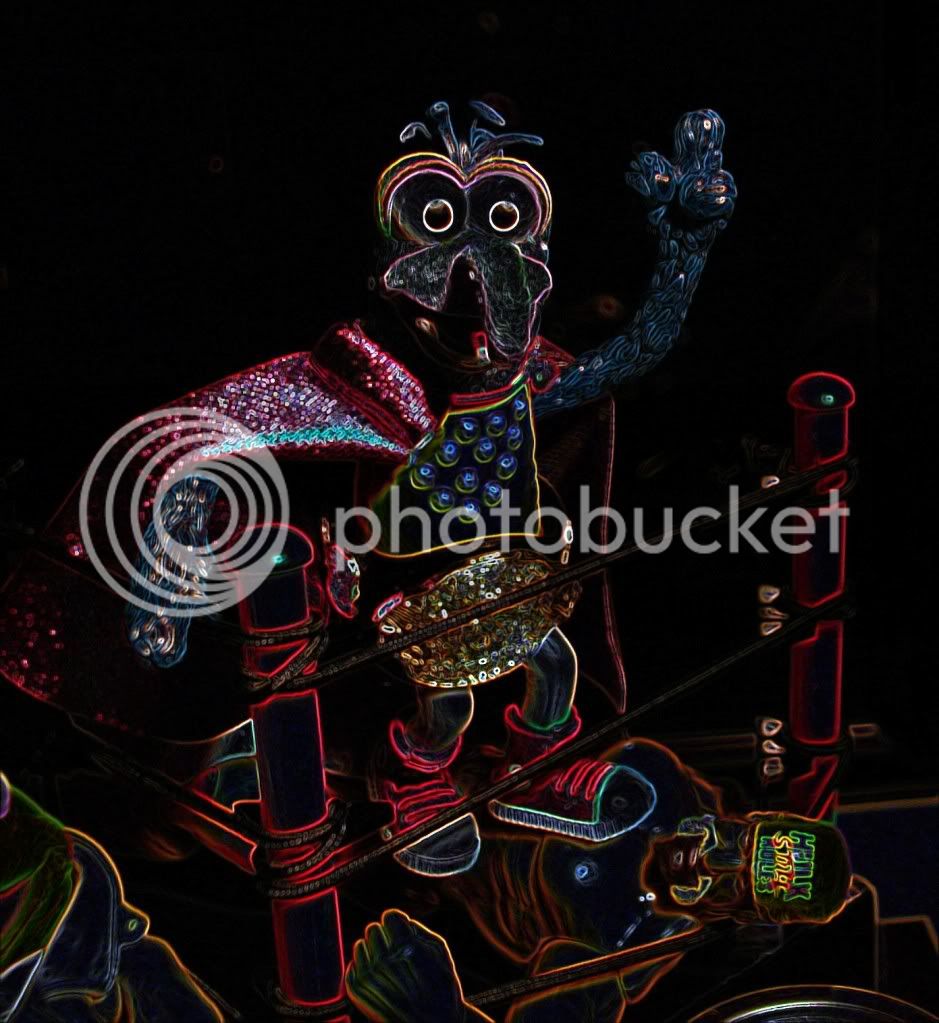 back in a few minutes...


Dearth said:
Gah! I bet you're the one who bought that Park-Pirates "Treasure Keeper" figure I had my eye on.

LOL, I should have kept my big mouth shut over in Bellygrub's Jules Verne thread!

hurm...I did actually reply to this last week, but I just noticed the post never got posted (probably because I did it on my phone while at work)

Anyway...
Yeah Dearth, whoops, my bad. It was me who snatched up what seems to be the only one recently on Ebay. If I had known that was one you were going to go for, I wouldn't have cut you off.

so, um, I guess it wouldn't be cool to say HOW FRICK"N PERFECT that treasure keeper's accessories & display are for the Muppet Treasure Island figures? (sorry)

I haven't set up the display on my stage yet, nor has Samuel Arrow arrived from Ebay yet, but let me tease a few artsy images of what I kinda have in mind...

Of Course Rizzo is the first one at the treasure chest 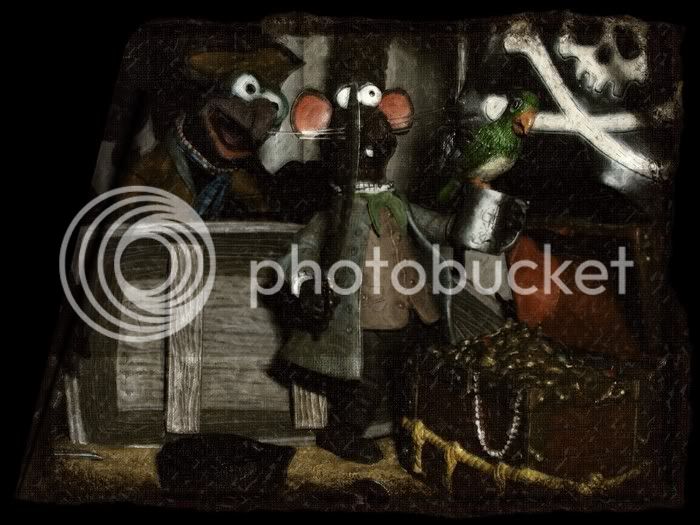 Uncle Deadly as Bluebeard the Pirate 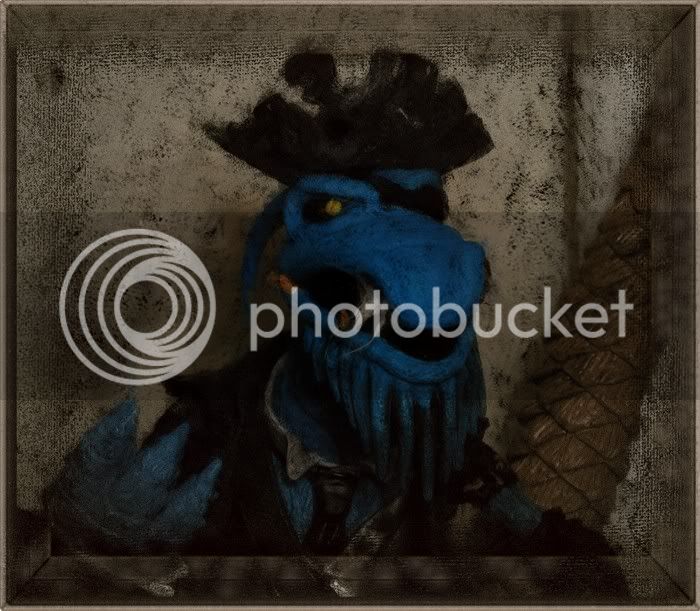 "Yo Ho, Yo Ho, A Pirate's life for me" musical number with guest star Johnny Depp 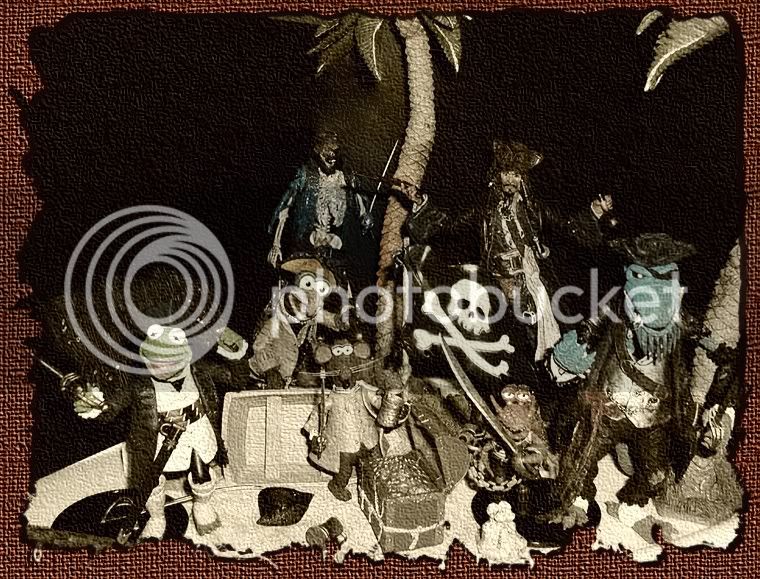 Well, Thanks to Dearth for the unintentional suggestion ...it is right on the money

I knew it! I just had a feeling in my bones that the Treasure Keeper auction that disappeared was part of the pirate-y goodness you mentioned ordering.

Actually, I had contacted that seller about combined shipping for the Treasure Keeper, the Captain, and the Buccaneer that he had listed as three separate auctions, but his 'combined' shipping wasn't much better than if I'd paid the full shipping on each, so I was hesitant to order from him.

In the meantime, I found a website selling the Buccaneer for much less, and figured I would eventually find the Captain and Treasure Keeper for better prices if I would just be patient.

Actually, I have never seen decent pics of the TK and his accessories, either loose or carded. If you get a chance to take a couple, please post them here.

I was browsing the other pics in your most recent posts just a few minutes ago... had a suggestion for the Adventure Kermit pic. Do you take your photos with a tripod? If so, do multiple passes for lighting effects. The digital flames look fine at first glace, but the light source illuminating the figures clearly isn't coming from that giant flame.

This is one of those things that occurred to me AFTER I'd done crude digital flames as a post effect on a pic of the Frog Scouts around the campfire. The fake flames were a nice touch, yet the lighting was clearly coming from overhead, and not from in front of and below the figures, as it should. (Although, a tiny reflection of the flames which I added to the irises of their eyes really brought them to life.)

What I should have done was this: set them toys up and put the camera on the tripod. The first exposure should be taken with full light. But do a second exposure with the lights off and a real candle sitting where the toy prop was, whether Robin's torch or the Scouts' campfire.

Edit the actual candle out of the second pic (probably with a clone brush tool or something similar). Then overlay the two photos in your editing software and tweak the layers until you get the right moody lighting that you want, with that interactive "source light" element of the candlelight. Then add in the digital flames and they will appear to actually be casting directional light on the toys.

I'm probably too fond of practical lighting effects like that, but I've used them in stage plays before, and they can be very powerful. I once staged a five-minute dialogue scene lit solely by a fake birthday cake, but with eighty real candles on it. When the actor blew out the candles, it was a real blackout for the intermission.

These are by far some of the coolest pictures I've ever seen. j3h... you and Dearth rule in dioramas and customs!

I agree with frogster, you dudes rock