I'm eager to see the video pop up myself..... Hopefully it hasn't been delayed. 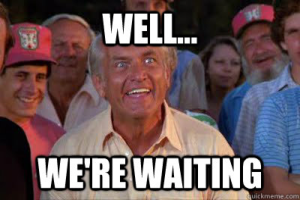 In the meantime, I'm going to say I'm still going to be a fan of the Muppets till the day I die. Behind the scenes issues will never ruin the way I see them.

Well delaying would only lead to further speculation that they may have second thoughts on moving on with Matt.

I don't see why they would delay the video any longer. The news is out that Kermit has a new performer, all the bombshells have already dropped, so people know this video is coming. If they are worried about angry comments, then they are just pushing off the inevitable

I'm sure they planned it as usual when it was just TP and the Mindset reporting it. And then it turned into this whole big thing, so I can see why they'd be weary. But they can't hold off forever.

And oh the irony of the only one of these videos actually worth looking forward to is delayed.

Feel free to correct me if I'm wrong, but I don't think there was ever an official source saying that we'd get any video today. I remember the "Thursday" rumor stemming from another forum member mistakenly believing that the regular video day was Thursday, as opposed to Monday - which then turned into a "Oh, maybe they moved it this week."

Hmmm...I remember someone specifically saying it had been postponed until Thursday...

Muppetboy09 said:
Hmmm...I remember someone specifically saying it had been postponed until Thursday...
Click to expand...

Which very well could have been based on rumors going around this board. No statement was ever made by Muppet(s) Studios, to the best of my knowledge.

Mo Frackle said:
Apparently, it's being delayed until Thursday.
Click to expand...

That's too bad. Was really looking forward to seeing it today.

DARTH MUPPET said:
I don't know about them being a Joke this year, meaning the legends awards, Mark Hamill and Whoopi Goldberg are deserving!
Click to expand...

Whoopi, I can understand because of her part in Lion King. Mark Hamill and Stan Lee are legends in their own right but not Disney legends. They juust joined the Disney familiy a few years ago and in the grand scheme of Disney, they are just a blip on the radar.
It's clearly that they were just picked because they're big names.

It's an absolute joke that they went in before people like:

-Jim Cummings (voice of Pete for more than 25 years, a huge part of the Disney Afternoon with characters like Darkwing Duck., Monterey Jack and lot's of others.
-June Foray (voice of Magica de Spell for about 30 years, Granni Gummi, parts in the original Cinderella, Peter Pan and Mulan)
-Paul Winchell (voice of Tigger for a long time,Grumpy Gummy

And to keep it more on-topic. I don't see Jim Henson as a Disney Legend either, even if he got a beautiful induction. Thay being said, he did contribute more tha a lot of other inductees by virtue of the Disney World Special and Muppetvision 3D.

Now baqck on topic...hurry up with that video Disney. I'm curious not only to see the performance but also what the thought is and people will interpret it as relating to the current Whitmire situation.