The problem here is there are practically no actual facts known to public (that's us) -- mostly the pretty vague allegations made by Brian and Lisa (and a very emotional facebook post by Cheryl, quickly withdrawn) to the effect of "We are Henson kids and we support the studio's decision". Whether they were talking about their own experiences as of 15 years ago, or voicing the accusations related to more recent period, as provided to them by Disney, is unclear.

On the discussion side, there were real people who worked with Steve for years coming up saying that he was great to work with, and there was never a bad experience -- and several internet posters with various accusations, who, amazingly, never shared their names or how they came to know about such.

I have my own opinion of guys pouring dirt on people anonymously. Unfortunately, by nature, people tend to believe bad news more readily than good, and there are people who, having never met Steve in person, tend to project their own images of what a bad coworker would be on Steve.

Personally, I think the whole thing was a tragic mistake, and whatever tensions Steve had with the studio could have been resolved to everyone's satisfaction by any other means. Quite unfortunately, that did not happen.

This happens all too often in the business: if certain people get too nitpicky about the material they're working with, or even the working conditions, they can kiss their jobs goodbye and be replaced with people who aren't complainy - this is also why in many cases, some actors are too scared to voice their concerns like this, because they know it may cost them their jobs.

But all I can really say about Steve is when I met him last year, he was an incredibly nice and personable guy, he was easy to talk to because he's as much of a fan of the Muppets as we are, and you can sense his passion he had in his work and time with the Muppets. Both sides have their stories and are sticking to them, we may never know the exact truth (though, I have heard some quiet inside info that seems to indicate that Steve isn't being completely honest about his side of the story), so I believe it's best that we just continue to let the two parties go their separate ways; Matt is slowly improving as Kermit, but he still needs to work on it, and Steve is doing his own things now, so that's the way of the world.
Last edited: Sep 11, 2019

D'Snowth said:
Maybe so, but again, as far as his performances as the character goes, that blame really lies more with the writers and directors, as even Frank has been expressing repeatedly that clearly the writers and directors Disney has been bringing in don't really understand the characters very well, and are not really giving any of the performers the freedom to have their input be heard - this is supposedly one of the things Steve was fighting for.
Click to expand...

Hmm. I also think that Frank Oz had the opportunity to take lead of the Muppets as a brand after Jim Henson died, and decided to go in another direction, so I don’t know how helpful it is for him to continue to negatively comment publicly on the direction the brand is being taken. I take your point about the performers possibly not being heard by Disney - the organisation does have a reputation for controlling from an executive level - at the same time they own the characters and should be able to take them in whichever direction they choose.

For those who say, "Vogel does Kermit like Henson," I guess they'll be pleased to see that like Jim, Matt's done at least one interview alongside Kermit like Jim would do, as opposed to Steve, who prefered to have Kermit fly solo during interviews.

Is there a link?

For now, just a still shot:

D'Snowth said:
For those who say, "Vogel does Kermit like Henson," I guess they'll be pleased to see that like Jim, Matt's done at least one interview alongside Kermit like Jim would do, as opposed to Steve, who prefered to have Kermit fly solo during interviews.
Click to expand...

Granted this was on a Disney Cruise, IIRC. Steve had done Con appearances with Kermit on hand, but I don't think Disney would allow the puppeteers to go onto a talk show like Jim did.

Muppetboy09 said:
I don't think Disney would allow the puppeteers to go onto a talk show like Jim did.
Click to expand...

Cons aside, I seem to recall Steve once mentioning it was something he consciously did, because to appear alongside Kermit for interviews and such was more of a "Jim thing," so-to-speak.

D'Snowth said:
For those who say, "Vogel does Kermit like Henson," I guess they'll be pleased to see that like Jim, Matt's done at least one interview alongside Kermit like Jim would do, as opposed to Steve, who prefered to have Kermit fly solo during interviews.
Click to expand...

So Steve never appeared with Kermit next to him at something that was not meant to be taped? Like say... here: 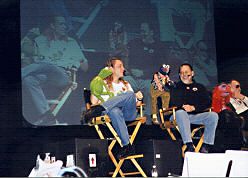 Steve did it all the time at conventions and there is nothing wrong with that. Matt did it on a cruise ship panel which is even less high profile than a convention.