I saw a few pics on social media,Fran Brill and Caroll Spinney are there along with the rest of the cast, and Miles is there too.Kermit will appear on the special,according with a pic of a scrip I saw. I hope Frank would do something, he is, with Caroll, the only puppeter alive from first season!

I just found a page of the script on the Wiki. As far as appearances go, they're seriously having a field day and putting in a HUGE dent in this special. Let's hope we learn about the airdate really soon- I wanna mark it on my calendar as soon as it's confirmed! 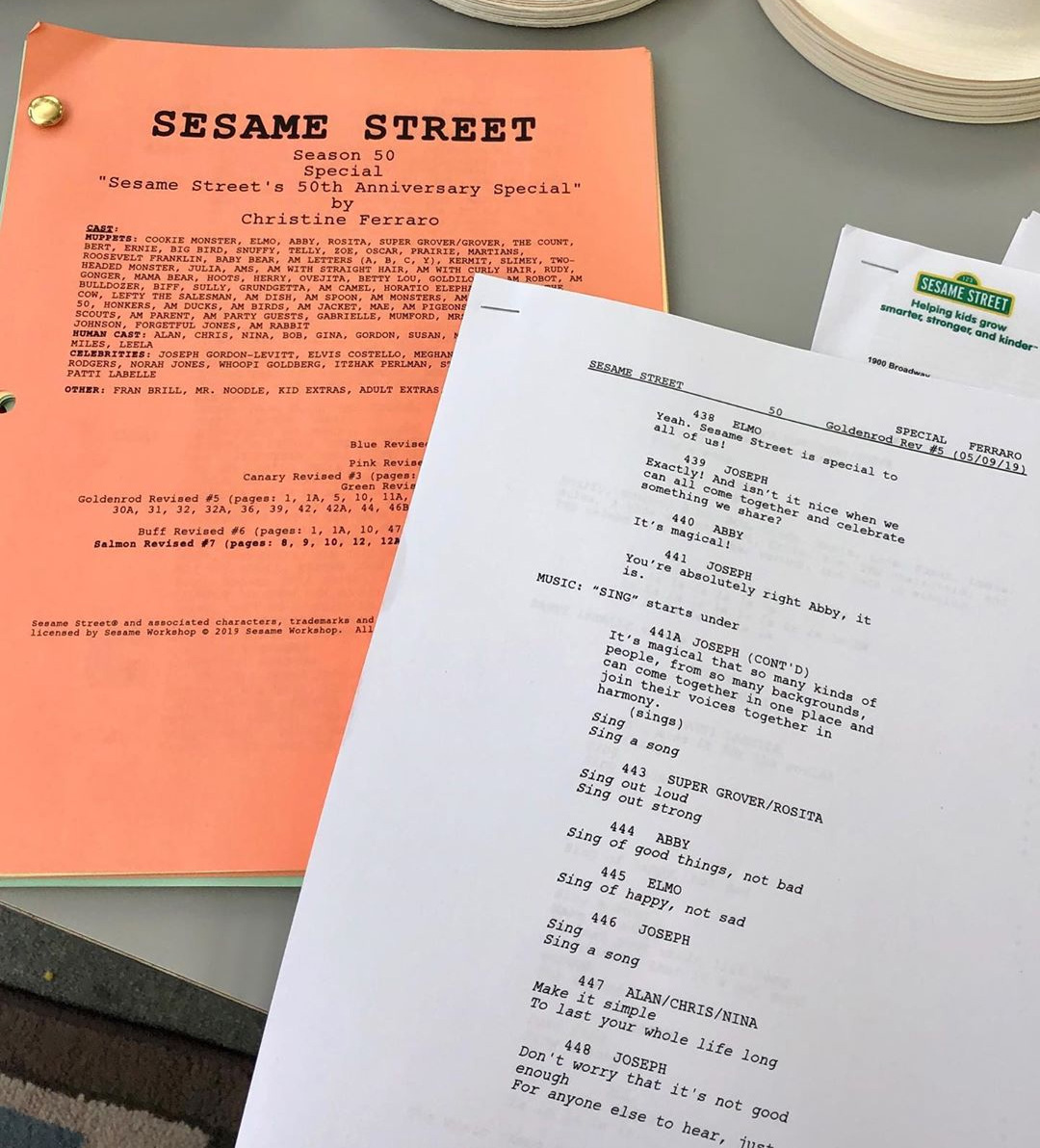 I'm surprised to see that they put numbers by each line. Is this common in scripts (well, the audio recording sessions I've heard for Looney Tunes shorts/The Bugs Bunny Show have the lines said out of order and I think referred to by number)?

At one point I had wondered if maybe the cast listing included characters seen in past clips. One of the script pages blocks part of that cast listing, so we can't really see everybody, seems to be blocking human cast members the most, if we could see names like Mr. Hooper, David, and Olivia, that would definitely confirm if they're listing characters in clips.

Though technically, we don't yet know that this will have clips (it could be like Elmopalooza). I am expecting/hoping for clips, but at the same time, there's so many returning cast members that I almost wouldn't mind if they didn't have clips (would there be enough room for everybody to do something?).

But I wish they would have shown a page leading in to past clips, would we have seen a clip listing similar to how the scripts list inserts that appear or would it be done differently (maybe even not mentioning many specific clips)?

Once again, this is really surreal, to see that another Joseph is getting together with a sing-along for "Sing," while I'm getting other YouTube puppeteers together for the exact same thing!

Kermit is going to be in this? Heck yeah!!

And I also see Fran in the cast list! I wonder if she's just going to appear by herself, or possibly reprise one of her characters for this one special. The latter might be a long shot, but it would be nice.
M

So it looks like that I was indeed right after all about Miles appearing.

And according to the script, I noticed that Whoopi Goldberg along with Joseph Gordon-Levitt, Elvis Costello, Itzhak Perlman, and Patti Labelle will be making appearances as well.

Yeesh with all these crazy jumping to conclusions and such. One page has Elmo/Abby dialogue - must be all about them! Page doesn't mention the use of archival clips - must not be any!

From what I've seen across Instagram and the info we already know about it, this special appears more in line with the 20 Years one - celebrity host looks at the show and its impact, with Muppet subplots going on and celebrity musical numbers.
Last edited: May 17, 2019

I don't like to get my hopes up in these situations. So, unless i'm proven otherwise, i'm just gonna assume that it's archival footage with Kermit, and not a new cameo.