The world's most iconic street celebrates its 50th anniversary. To mark the occasion, everyone comes together to take a photo under the Sesame Street sign—but the sign is missing. While Elmo and friends search for the sign, Joe takes a look back at 50 years of Sesame Street memories, and everyone soon realizes that Sesame Street isn't just a sign or a street—it's a place where everybody is welcome. 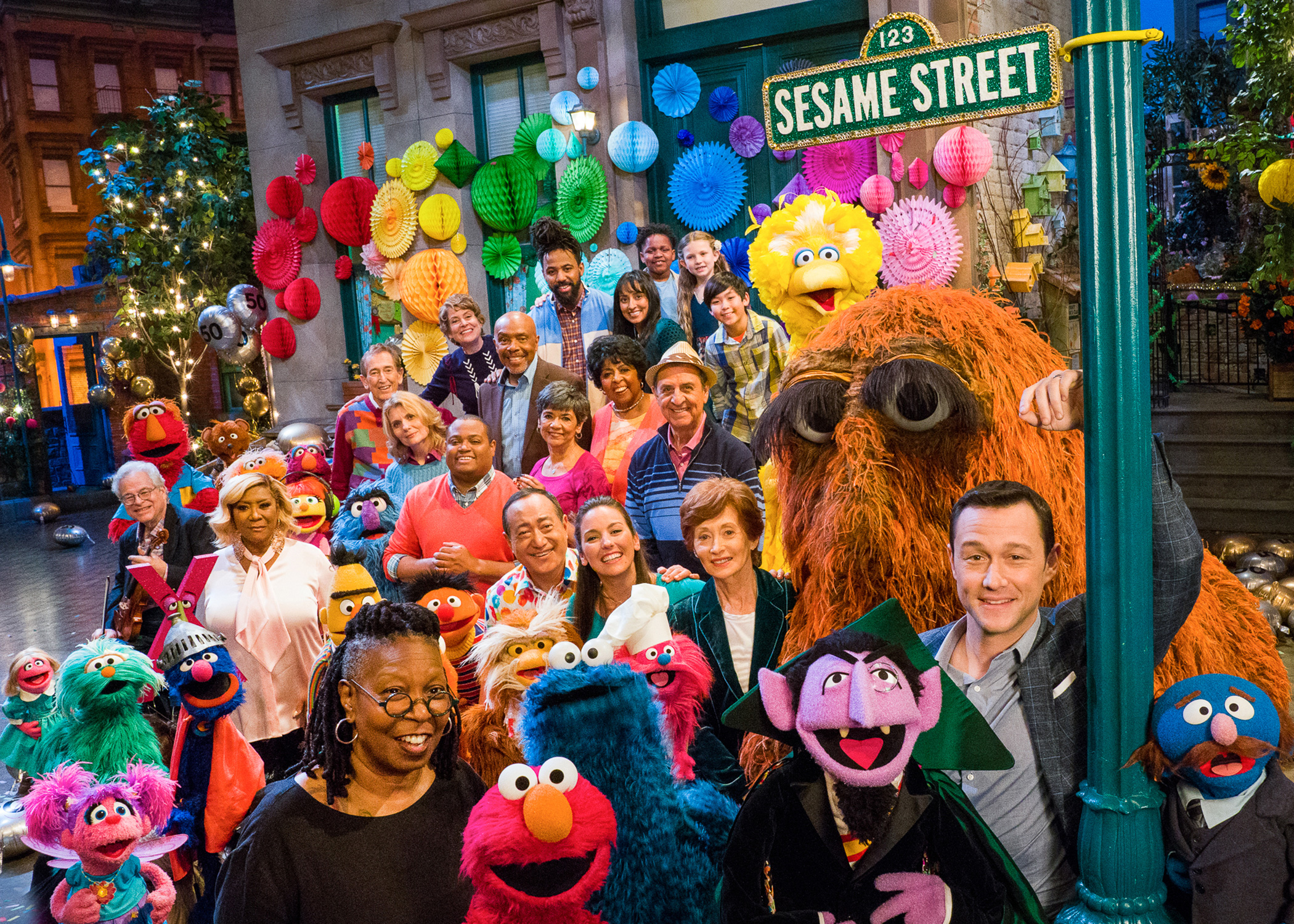 If you pre-order the "Sesame Street's 50th Anniversary Celebration" DVD from Amazon using this link a small portion of your order will go to Muppet Central to help make future upgrades possible. It's a great way to help MC and get a great price on the DVD with a low-price guarantee.

I'm in tears it was amazing!

Finally. What a special it was. Yet I wonder who will watch it again when it comes on PBS next week ?

Also it felt like a true callback to the anniversaries of the show’s past. I am just in awe with how much they fit in to the entire special.

I personally thought this was a great special! I loved seeing the return of old cast members and muppet characters that are now long gone (Kermit especially, and Ryan Dillon NAILED Lefty). All the celebrity cameos were great too, and I loved that remix to the loaf of bread cartoon.

So, that was pretty good! I thought things would really be rushed for 49 minutes, but everything moved at a nice pace. It felt maybe uneven, but it also felt like a classic Sesame episode - a small plot with random stuff thrown in the middle.

-The taxi driver thing is literally the best in-joke since Groda. Oh, and hearing Jim's voice as the baker was nice.

-I'm glad pretty much every character got a little moment to shine, especially Telly and Baby Bear. Oh, and I loved the little scene with Julia, Gina, and Alan.

-Maybe wish there were some more of the humans, but I'm glad the established, classic ones got a moment to shine (well except Gordon). Poor Miles and Leela I guess, but Nitya looked so hyped whenever she was onscreen.

-I'm sure your curious as to how the Solange song ended up in this. I can't elaborate, but there is a very good reason why it ended up here (and on DVD) and not an episode.

-KERMIT! Loved how the performance was musically inspired by the Lena Horne version.

-Ryan Dillon's Lefty was A-1. Holy crud, he sounded so much like Frank.

-Patti LaBelle's X just inexplicably being there was nice.

-I cannot stress how much I loved the end credits sequence.
There's probably others I can't think of, but yeah. That was fun! Now excuse, I was a Wiki page to spruce up.
Last edited: Nov 9, 2019

The special was a very nice celebration of the world's greatest street, though I would say the overall execution was average.

As much as I like Joseph Gordon-Levitt, his hosting duties felt kind of bland and wooden, but I really enjoyed the montage of him being super-imposed into a number of classic moments from years past, like Snuffy being revealed, Grover's near and far lecture, the Martians discovering a telephone, among others. A lot of the in-jokes and mythology references were nice too (especially the cab driver asking, "Where to, Mac?").

The cavalcade of celebrity guest stars we had was absolutely fantastic, with perhaps my favorite moment being Elvis Costello's "Bein' Green" duet with Kermit - which really has been Matt's best performance as Kermit so far (though, I can't believe I'm saying this . . . the shape of Kermit's head was wrong); Nile Rodgers's cover of "People in Your Neighborhood" was also really enjoyable (especially with the throwback to Doctor Ernie); and I love how Sterling K. Brown put Cookie Monster to shame when it came to eating cookies! The star-studded "Put Down the Ducky" was truly in the Sesame spirit, and whoever performed Hoots did an excellent job . . . matter of fact, those who performed the classic Muppet cameos did an excellent job - especially whoever did Lefty, they had his mannerisms and inflections down pat . . . Sherlock Hemlock was way off, though. And of course, it was absolutely wonderful to see almost all of the older castmembers return for the occasion - including Caroll, Debbie, and Fran's cameos at the end.

My very minor quibbles with the special pertain to was there wasn't a lot offered in the way of actual classic clips mixed in with the special, but this wasn't a clip show or a retrospective, so that's forgiven. The loaf of bread song was . . . random . . . and clearly shot well before the special, so it was tad jarring as far as continuity goes to see the street decorated for the party the whole time, and then just suddenly bare; it was kind of inappropriate for Meghan Trainor to be wearing skinny jeans - could actually see her thigh gap at some points during her number.

For what it's worth, a very enjoyable special!

So who were all the cameos?

D'Snowth said:
especially whoever did Lefty, they had his mannerisms and inflections down pat . . . Sherlock Hemlock was way off, though
Click to expand...

Lefty was Ryan. I dunno, I thought Matt's Sherlock wasn't half bad.

I watched it together with my mother, and it was just fantastic! We could tell everybody was having such a blast on the special, and it turned out to be a very entertaining 45 minutes. It reminded me a bit of the 25th Birthday special, with some differences (BB having more presence before, and more songs), but both of them nicely ended with all the cast doing "Sing". I can't remember how many were in the 25th one, but there were probably more Muppet cameos in this special, and it was nice to see all the past characters return.

Grover was absolutely hilarious. It would've been funny to see him own Mr. Johnson like always, but he was certainly at the top of his game even in his Super Grover persona. Having Kermit duet with Costello to Bein' Green was beautiful.

They put tons of effort into this, and it showed immensely. What a blast!
D

I absolutely loved the special. I thought it was very well-done. It was nice seeing the classic human and Muppet characters. Seeing Kermit on the street again was such a joy (even if I'm not too crazy about Matt Vogel's Kermit). I did love the subtle references, particularly Carroll Spinney's "Where to mac?" line in the beginning. The only complaints I had is that I wish some of the characters had more to say and a purpose rather than just being like "Hey, remember me?" Also, I think Joseph Gordon-Levitt was a little too all over the place. Overall, wonderful special. May be the show's best anniversary special yet.