Nina is feeling frustrated as she tries to fix her scooter. Elmo and Grover wonder how they can help Nina calm down. What if they make her glitter jars? Let's try. 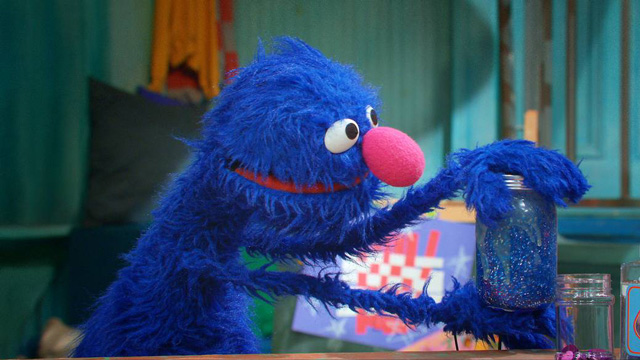 Alright, Glitter Jar. Glitterino. The Jar of the Glitter (Please forgive me for that, I was watching the Richmeister sketch from SNL last night). I didn’t know what to think of this episode at first, but now that I’ve seen it, you’re about to find out if the people behind this episode are masters at their craft (see what I did there), or if this episode’s as frustrating as real glitter.

The cold open features Elmo setting up the theme of arts and crafts by showing off some craft materials with help from Ruke Demington. I literally have nothing else to say about it besides that joke.

The episode starts with Elmo playing with his glitter jar, when he hears Nina. He goes over to the bike shop to see her frustratedly trying (and failing) to fix a scooter. She explains her problem to Elmo, even accidentally flinging a part she needed away in the process (which lands on Grover’s nose) (by the way, I know parts in parentheses usually aren’t important, but Grover is a main character in this episode, so don’t be fooled). Elmo decides to make a glitter jar to help calm her down, and when Grover sees how frustrated she is, he decides to make one too. They go over to a craft table, where Alan shows them how to make glitter jars. I’ll put the instructions here in case anyone reading this is curious:
Grover accidentally gets the glue everywhere with his jar, which causes his hands to get stuck to it. Elmo tried to free him, but only gets himself stuck as well. They panic, but shake the jar to calm them down. They then see Abby, and ask her to free them with magic. After the two explained what’s happened in the episode thus far, she does, and upon seeing how frustrated Nina is, makes a glitter jar herself (given how quickly she did it, I can only assume she did that with magic as well). They give their jars to Nina, which helps her calm down and fix the scooter. Right after that, we cut to Mr. Johnson, frustrated at waiting for his soup. Grover remembers he’s supposed to be a waiter that day and goes off to help him. Unfortunately, we never see him serve Mr. Johnson, but Nina quips about how “all the glitter jars in the world wouldn’t calm [Mr. Johnson] down.” That was funny.

Overall, this was a pretty good episode. As someone who struggles with being unable to calm down, the episode gave a good remedy to that. Granted, I hate glitter, but it’s the thought that counts. And that ending joke was funny as well.

Now, I have bad news, and good news, and more bad news. The first bit of bad news is that they’re still doing a pointless “I Wonder, What If, Let’s Try!” bit in this episode. The good news is that there’s no “letter” segment for the LOTD (which is C). The other bad news is that instead, we instead get this really cringy rap by a bunch of British kids about making crafts out of recycled materials. Most of the lyrics consist of “Don’t throw it away. Recycle and play!” and talking about recycle bugs (whatever those are). You really don’t understand what I have to go through to make these reviews for you to enjoy, so.

Now for the parts of the episode more focused on the “arts” in “arts and crafts” (don’t worry, we’ll return to the crafts part later). This starts with the season’s first brand-new installment of Monster Foodies!

The segment, as usual, begins with Cookie and Gonger receiving a call from a girl, who requests something artistic made of fruit. Cookie draws up a diagram of a fruit sculpture consisting of pineapple, cantaloupe, grapes, and starfruit (which he mistakes for fruit with stars on them). After Gonger’s usual tantrum about being one ingredient short, they head off to an orchard to get some starfruit. They meet a starfruit orchard employee who shows them how starfruit is grown, and gives them some to use in their recipe. They go back to Sesame Street, where Cookie chops up the fruit. I really felt it was forced when Cookie and Gonger did the whole “I Wonder, What If, Let’s Try!” thing while deciding how to stick the other fruit into the pineapple. But anyway, they send the girl her order, she thanks them, and the segment ends.

Now onto the NOTD. Which, for the second week in a row, is 5. Seeing the amount of time they had left in the episode, I thought they’d air that Hailee Steinfeld song. Luckily, instead we got an actual number segment (surprising, I know). It features 5 crayons trying to draw a number 5. They initially fail, but through teamwork, they make an “Awesome Number 5!” While I’ve always liked this segment, one thing that sticks out to me about it is the music. It sounds exactly like the theme to the People’s Court.

After that, it’s back to crafts for Elmo’s World. He begins by imagining some crafting materials making a birdfeeder. He then hollers for Smartie, who is wearing a mask she made from a paper plate (and her brother made a functioning plane out of popsicle sticks). She shows Elmo a short (and I mean very short, even by EW video montage standards) video about crafts. Elmo then goes to play a game where he and the disembodied kid voices find stuff around a kitchen to make a horse out of (they use cardboard tubes as the legs and head, a jar for the body, and tie it together with string). Then, when Elmo talks to Mr. Noodle, he makes a train out of string, shoeboxes, and drawn-on wheels, which surprisingly functions like a real train. I’m getting kinda tired of typing this sentence in almost every review I do, but, Elmo does his happy dance and the segment ends.

Finally, Elmo and Grover show off their glitter jars, and Grover cracks up when Elmo signs off using Ruke Demington. Honestly, knowing about the inside joke on the forum made me laugh at it too.

So that was Glitter Jar. I really liked this episode. It had funny moments, both intentional and unintentional, a soothing street story, the return of Monster Foodies, and even a real number segment! Granted, there was a crappy rap song in the middle, but, for the second episode in a row, I feel comfortable giving this episode an 8/10. See you in March.
Last edited: Feb 25, 2021

If somebody tried giving me a glitter jar, or anything with glitter for that matter, they would be dead.

D'Snowth said:
If somebody tried giving me a glitter jar, or anything with glitter for that matter, they would be dead.
Click to expand...

Same (but I mean it metaphorically).
A

It was refreshing to see Nina get angry for once. I liked the Popsicle stick puppet that Elmo made. It's about time we got a new Foodie Truck. Keep in mind, that David and Warrick stayed in Chicago and England respectively and just did the voices for these bits since they were filmed after the start of the pandemic. I wonder how long this will last. It'd be nice if they could get the vaccine, so they can be on set and improvise with each other again.
You must log in or register to reply here.
Share:
Facebook Twitter Reddit Pinterest Tumblr WhatsApp Email Link
Top