Puppet-in-Progress: From the foam up

Slackbot, I can't see any of your images?? Anyone else not able to see them.

They're turning up fine for me. The server may have been momentarily glitched when you couldn't see 'em. Can you see things now?

Next! For this puppet I had to try something new: dyeing fur. Well, actually, I've done that before. For Boober, Sidebottom, and Sage I dyed gray fur blue to get a blue-gray. I only nudged the color over a little, which is all you can do with my usual dye. Rit dye works great on feathers and Antron fleece, but faux fur is made of acetate and turns up its nose at the stuff, as I found out while making Shonky Fraggle.

So, I bought a few samples of disperse dye, which is made for acetate, from Aljo Dyes. And this past weekend I finally gave em a try. They're much more hardcore than Rit Dye, as they sink into the material they dye rather than sitting on top, and they require a longer time sitting in a much hotter bath. And the dye packages have scarier warnings on 'em. 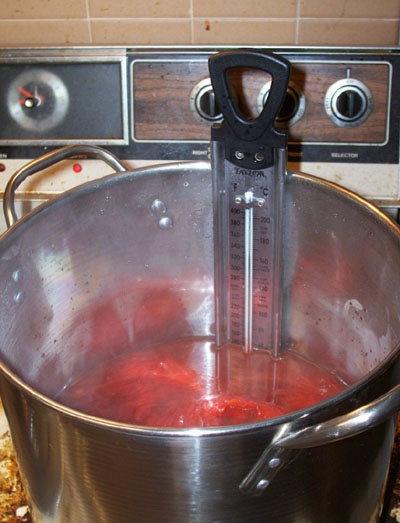 My chemistry lab. I bought a stainless steel boiler just for use with dyeing, as I can't see me using dye-stained pots for stew or steaming veggies. The thermometer is also dedicated to this task. The dye bath has to be heated to 180-200 degrees F and kept there a while, then allowed to cool over time to ensure dye exhaustion (meaning that all the dye seeps into the material).

(For comparison, with Rit dye I just run hot tap water into a big plastic bucket, put the salt and dye solution in, mix well, and dip the fabric in and out and in and out until it's the right color. It's all done in the sink.) 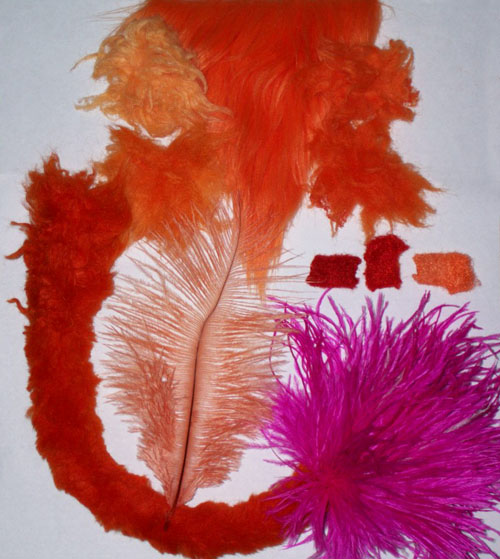 The triangle-shaped piece at the top is the original orange fur. The four bits on either side of it are swatches I test-dyed in the Aljo dye for different amounts of time. Those on the left started out white, those on the right were originally orange. Those proved that the fur would take the dye, but to get a good dark reddish orange I'd have to let it soak in.

So, I cut out the fur, cooked up a strong dye solution, and soaked that stuff good. I let it go twice the normal time. The result is the completed tail. At first I thought I'd overshot the color, but when I put it against his orange skin it looked just right. So, yay, A+ in Chemistry 101.

As ever, I had to try the dye out on other materials while I was at it. The three small bits on the right are Antron fleece. The first two stayed in as long as the fur swatches did, and look how they slurped that color up! I chucked the third one into the dye bath after taking the fur (the puppet fur, not the swatches) out. After most of the dye had been soaked up by the fur, the fleece still turned that color, and I'd left it in only 10 minutes or so. So, yeah, it works on Antron. The results on ostrich feathers were less impressive. I guess I'll stick with Rit dye for those.

So, now I have Gobo's pelt. As soon as it dries I'll cover up his naked, reticulated shame.

Slackbot said:
The rods are removable. See the orange sock-shaped thing at the bottom of the first pic of my previous post? That's the sleeve that the top of the rod will fit into. You can see the sleeve sandwiched in the middle of the foam hand on the left. I glue it in underneath the wire frame.
Click to expand...

Do you have a picture of how the arm rod looks in comparison to your inner sleeve and how it looks placed in the hand? I did a simular version for my Skeeter puppet but the rod ends just kind of sits in the pocket and will flop out with big hand movments.

Sure. Here it is:

On the left, the pattern piece on top of a finished hand & arm. Keep in mind there's a seam allowance of about 1/8", so it's snugger than it looks. On the right is an arm rod head on top of the pattern piece. Yep, that's just a safety pin attached to the end of a rod. I clip off the end of the pin so there won't be any stabbitiness, wind lots of heavy-duty thread around it to bid it to the rod, and then cover the thread with gorilla glue. It's plenty sturdy. The head of the pin also grips the inside of the sleeve, making it more stable. I've never had a rod come out while gesturing.

Do you have pictures of your Skeeter puppet? I'd like to see how she came out.

I have a quick question, where did you but the feathers for the hair?

I buy feathers from a seller on Amazon called Crazy Cart. They often have packs of 100 13.5" white feathers for sixty-something dollars, which is pretty good bang for the buck. They sell them in different size categories, and while the small ones may look wonderfully cheap (10 for a dollar, or even a penny), they're useless for puppet hair.

I used 25 feathers for Wembley's hair. Not sure how many I ripped up for Gobo, but I'd guesstimate it was about 20. Now you see why I buy in bulk!

Oh, I've also used an ostrich feather boa. I bought that on eBay and used chunks of it on Shonky. Turned out to be more labor than it was worth, even though the strands were nice and long and fluffy.

Thanks for the info on the arm rod pocket. The one I tried was U-shaped and that would be the reason why it doesn't work out very well. Your design is what I think my BigWilly Whatnot has for his pocket. It seems to be L-shaped like yours. As for my Skeeter he isn't a replica of Scooter's sister just a monster modeled after my grand daughter's Halloween costume. I will be posting a build thread as soon as I get a picture of my grand daughter in costume with her monster. In the meantime though I do have one pic of the puppet to show. What do you think?
Chris 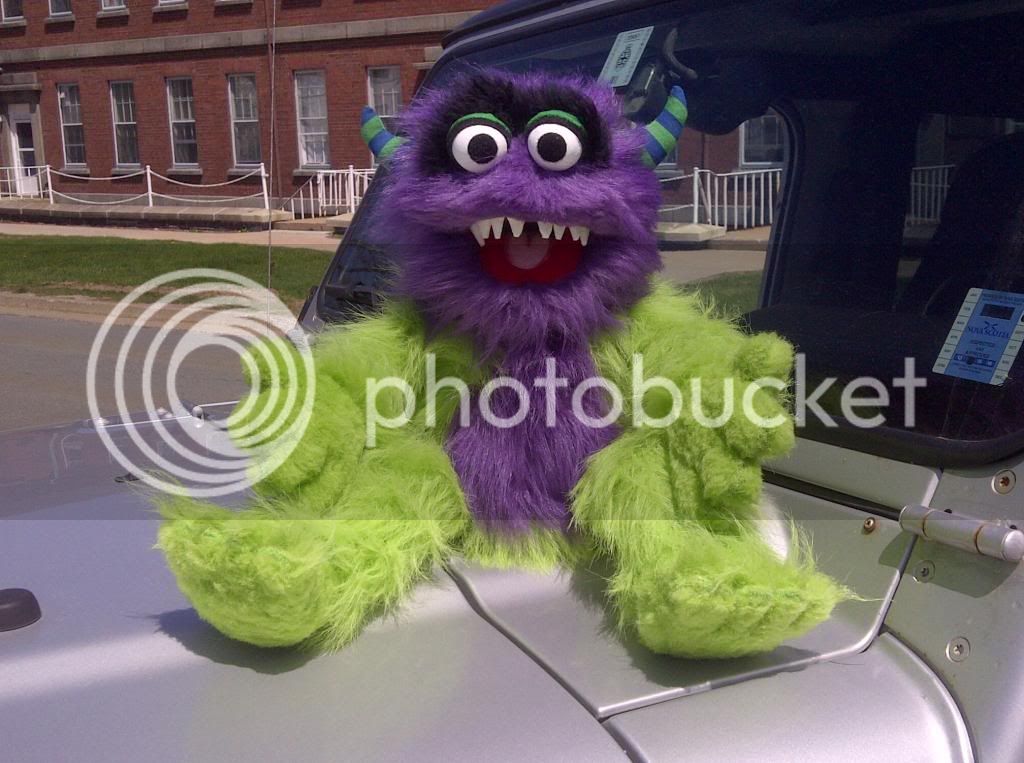 Ha! That's a very cute monster. Well done! I'd be interested in seeing how you built it. I see that the fur on the hands is shorter than the arm fur. Did you trim it, and if so how?

One of the puppet websites has a tutorial for making removable arm rods using doll joints mounted in the hands and arm rods hooked at the end. It looked like a good idea, but it wasn't possible for me to bend the rods I have, so I borrowed the idea of having the rods go into a sleeve within the hand, and adapted from there.

I trimed the hands and feet with a pair of scissors from my beard trimming kit. I left a few strands of fur at the end of each toe.

I have seen the tutorial of using doll joints it was on Puppet Planet. Not a bad idea but I think it would be a little difficult getting the hook part to go around the joint. I have also seen another version where they glued a clear rubber tube in the position you put your "sock" in. Then bend the rod a little to hook it in. 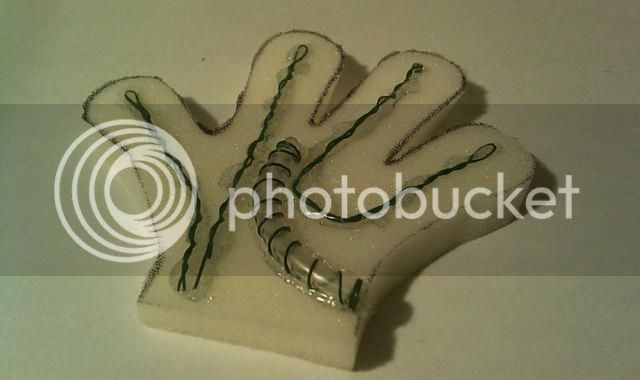