The Muppets are about to launch their new digital series, Muppets Now, but just when Scooter is about to hit the 'upload' button, Kermit the Frog inadvertently alerts the rest of the Muppet gang that they are about to go live - unleashing an avalanche of last-minute notes, tweaks, changes, suggestions, revisions, and ideas.

Miss Piggy tries an impactful beauty treatment with Taye Diggs before dishing on personal style with Linda Cardellini. Muppet fanboy Walter uncovers Kermit’s secret passion for photography. The Swedish Chef challenges Carlina Will to a culinary curry cook-off where things get heated. Finally, Kermit goes one-on-one with RuPaul for a conversation about multi-tasking, all while fielding requests and interruptions from other Muppets. 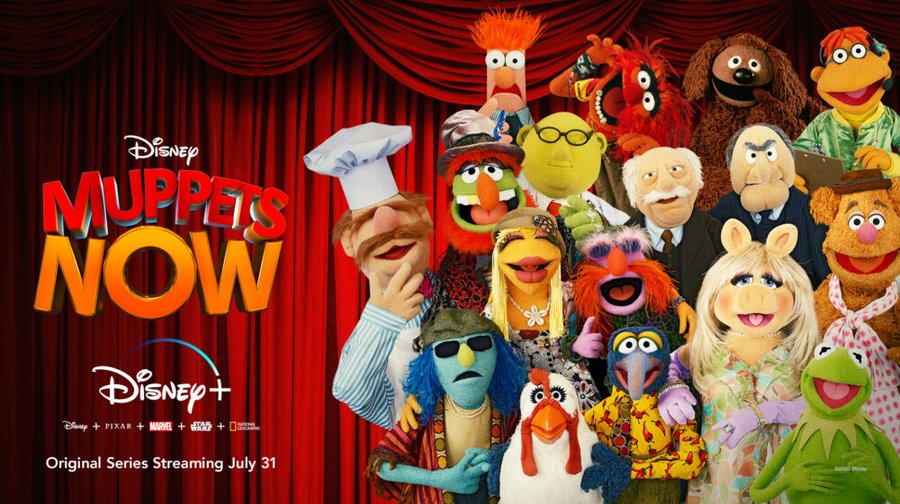 I... really don't like it much. I couldn't stand Piggy's vlog segment. It represents everything I dislike about modern Piggy. The frame work of Scooter uploading the show is kind of pointless and just tacked on.

The Chef segment was bad as well. It was like an attempt to show a real recipe and be funny and failed at both. The Chef works when there is a punch line to what he is making and when he is used quickly. Here, he just makes a mess and the segment is too long.

The Muppet Master segment was ok. I like the idea of Walter doing a segment on other Muppets. It was basically the only thing that almost worked for me.

This whole show looks like it will feel dated very quickly.

I thought this was interesting. In fact, it was something.

Not a strong first outing, I would say. The photobombing segment was odd, but it worked, as did the RuPaul interview. Everything was kinda "meh." The framing scenes felt too "lacking in narrative" and looked way too busy to focus on anything.

Since most websites have been saying good things about this, I can only assume the next few are better. I am curious how these would been a just stand-alone shorts as they were intended.

I liked it, but I didn’t love it. A lot my issues with it are definitely “me problems”, I’ll admit.
The main thing is, I didn’t really know any of the guests outside of Linda Cardellini so maybe if I knew them it would have worked better for me?
I thought it was kind of odd that Swedish Chef wasn’t the host of his own show.
The Kermit photo-bombing sketch was definitely the highlight for me, I think Matt is doing a find job with the character and and it’s really just a matter of getting used to it for me, I think.

So yeah, overall I enjoyed it, but I hope they do more Muppet-focused bits in the future (or at least bring more guests on that I actually know

I mean, it was... okay I guess. I'll admit I got a few chuckles here and there, but it's the same problem as the more recent Muppet series, TOO MANY HUMANS! Cut the humans down. Also, it did not hit any of the high marks that The Muppet Show did, but I don't think any new Muppet project will ever do that. Honestly, if you're looking for some classic Muppet-like humor, just watch the Muppets Hamilton video. I do hope that this show will get better as new episodes are released.

I think turning unrelated segments into a 30 minute episode was a bad idea. I think Muppets Now would have worked a lot better if they uploaded individual segments 4 times a week instead of a full length episode once per week. If I were to watch one of these every other day, I think I would enjoy them much more than watching unrelated stuff shoved together.

Clearly the show was set up to be a series of YouTube like uploads totally separate from each other. They should have stuck with that and run the upload schedule like a YouTube channel. That way, every other day we have something new and Muppet related to look forward to. Instead, we have this weird mesh of segments that have nothing to do with each other and it just feels unbalanced.

It was just okay. The first episode was a series of unrelated segments, but some of the segments did work. The Kermit photo-bombing segment was one of the highlights, but it got one laugh from me and that's when I saw the Kermit drinking tea meme. I did like the Swedish Chef skit which was a clever throwback to his segments on The Muppet Show, but it kind of went on too long. The Muppets work best when the personalities of the characters work off each other and you properly balance the charm and sweetness with the adult humor. So, having a bunch of individual segments strung together just doesn't feel like the right approach for these characters.

On a final note, I'm starting to warm up to Matt Vogel's Kermit, but his voice sounds too deep and congested. However, I do think Vogel has gotten the mannerisms and personality down.

I thought it was ok

Pilots can be difficult, let's see the rest

I do agree the whole premise of it feels a bit awkward and i'm not sure the Kermit/Scooter intro and outro were that amazing to get people staying tuned when there is a culture for people just to video switch in seconds. It was just ok. I think there are way better ideas and possibilities on how to shape a Muppet show yet to be explored.

There were definitely some great moments (Howard Tubman, Gonzo, Uncle Deadly) but a lot of it didn't feel laugh out loud or must see, and for the public who are really looking for warmth and nostalgia right now I don't think there was enough of the fun, and craziness of the gang they came to know of via things like TMS and the movies.

The live show at the Hollywood Bowl/O2 Arena really nailed that, so hard to see why this couldn't.

I'd agree with the too many humans comment, but also that for a show they have been promoting worldwide that the guests other than RuPaul were way too US-centric.

I think people want laugh out loud funny, maybe a song, more bigger variety of characters. They really missed hitting the right spot in a time where people need the Muppets more than ever right now.

It's really telling how when you see Muppeteers like the fantastic Bill, Dave and Matt on live streams that they adore talking about the past and really have huge love for the characters and the brand, but (aside from the two arena shows) they never seem that enthusiastic or excited about current times. Not a criticism, but I think we all know the Muppets have the potential to absolutely kill it, and i'd love to see everyone performers and fans alike absolutely going nuts about how brilliant and exciting a Muppet project was.
Last edited: Aug 1, 2020

The Chef segment kind of worked for me; I smiled a bit at Walter and Kermit; Uncle Deadly has really found his niche as a foil for Piggy; but none of it made me laugh out loud. Also, interviewing a non-flamboyantly dressed RuPaul felt like trying to be subversive and conservative at the time, trying to make everyone happy but likely pleasing no one. (I didn't see his appearance in the 2015 series or in the Lady Gaga special, so I can't compare or contrast.)

The Muppets are in a weird place. If they try to do something new and different like this, many people understandably say: This doesn't quite work. It feels like cashing in on a trend rather than innovating the way Jim would have. It will feel dated in just a few years. (To some degree, I agree with that.)

But if they go the opposite direction and make the whole thing a nostalgia throwback, people understandably say: Why do the Muppets keep rehashing the same old thing? Vaudeville doesn't exist anymore; why are they still parodying it? Why do the plots always revolve around getting the gang back together again these days? Do we have to hear "Rainbow Connection" for the millionth time? (The recent Facebook Portal commercials touched on several of these points, and were criticized for such. Again, to some degree, I agreed.)

But you see the problem? Whichever direction they go -- cashing in on nostalgia or trying something different for them -- people don't like it. I wish I knew the answer myself, but I don't.

I thought I remembered reading that the show was going to be much shorter, so I was surprised when it was a full 23 minutes. Reading above that the shorter segments were combined -- that explains a lot. Maybe they would have worked better as standalone segments, but then if I wasn't really laughing, it would have been just as sad that the mini-episodes didn't work by themselves either.

My family and I are watching Phineas and Ferb on Disney+ a lot lately. This is my first time really watching it. It's a great, funny, slapstick, clean, warmhearted show, loaded with surreal humor and able to get away with the occasional dark joke without ruining the tone. If Disney asked the Phineas & Ferb writers to make a Muppet show (and if they wanted to do it), I think I would be on cloud nine. Even the songs written for each episode sound like things the Muppets would sing -- very silly, and jumping around between genres. If not the P & F writers, then the Muppets still need some kind of visionary.