Puppet show to be penned by Danny Baker

LONDON -- A Muppets-style TV show made in cahoots with the Jim Henson Co. and the BBC has been given a greenlight.

Show is being written by U.K. broadcaster and comedy scribe Danny Baker, who in the past has worked with British chat show host and film aficionado Jonathan Ross.

Baker revealed the news on Twitter: "I'm writing the new Muppet/Puppet show for BBC/Henson. There I've said it."

The writer posted a picture of himself posing with Kermit the Frog.

With the working title "No Strings Attached," the show will feature puppets alongside celebs and bow in the U.K. on the pubcaster's flagship TV channel, BBC1.

Each week two celebrity guests will take part in sketches and compete in a series of games run by the puppets.

The BBC described the show as a "warm, cheeky, family affair fuelled by a healthy dose of off-the-wall, madcap fun."

A new "Muppets" TV series is being prepped in the U.S. after the puppet phenomenon's successful return to the bigscreen last year. 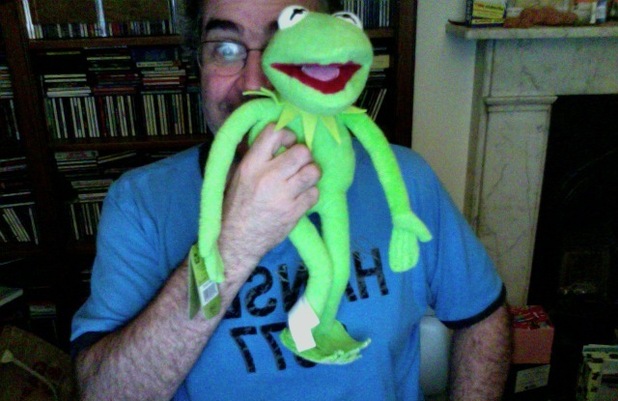 Who's the picture of at the bottom?

Why long do we think it's gonna take before this news gets twisted and reported all over the place that "New Muppet Show" is coming to BBC?

Heck, the writer of the show himself is already tweeting pics of him with a Kermit doll and referring to the show as a "Muppet/Puppet show" so if the word coming from the horse's mouth is confusing enough right out of the gate...expect false reports of a new Muppet series to soon go viral.

I think they better make it clear the one in Great Britian is gonna be "No Strings Attached" being done by The Jim Henson Company. The other MUPPET (aka Kermit the frog) show is gonna be produced here in the US. STILL EITHER WAY THIS IS GREAT NEWS!!! I AM EXCITED!!!
But for the love of Kermit PLEASE don't put it on the Disney Channel!!! ><

Exciting news! Please let there be a way we can see it in the US.

This is very exciting news. I am happy that it will give many creative people some work.

this is fantastic news i can't wait to see how it comes out and for people wondering who the guy is in the picture with the kermit doll his name is Danny Baker who is a very well known presenter and comedy writer in the U.K.

so a muppet show in great britain? WOOOOOOO-HOOOOOOOO!!!! I knew being uk bound would pay off eventually!

*ahem* A JHC Puppet show in Britain. WOOOOOOO-HOOOOOOOO!!!! I knew being UK bound would pay off eventually!!!