Got a response from the Sesame Puppeteer Workshop...

Scott Hitz was there. I think I saw Lara Maclean sitting in on the workshop in one of the photos as well. She is a puppet wrangler for Sesame Street.

Well i still admire them for making it an open autition.. As with most industries work is largly based on who you know...so fair play to them i say

Yeah, I don't really think that's very fair myself, but eh, whatever. Still interesting to read about though.

I'm not sure what you see as unfair? It was an open call, if a few had worked on other projects (Henson or otherwise) then so be it. Most would love to be able to say that, why downplay that talent of those picked because of it?
D

I'm not downplaying anyone's talent, I'm just saying that it seems like connections were at play here, and that doesn't seem fair to those who don't have Henson or such under their belts... I mean, if there are those who have already worked with Henson before, they should be familiar enough with the Sesame style of puppetry, so what would they benefit from? This seemed like it was an opportunity for the more average joes out there.

I understand your disappointment, but I think you're making a lot of (false) assumptions.

It makes a lot of sense that there were puppeteers who already have TV experience there for the simple reason that they're very, very good. Don't forget that each and every one of them would love an opportunity to work on Sesame Street just as much as you would. I also know that at least two people who have done training at the Henson Company applied and did not get in. So clearly having that on your resume did not automatically get you in.

Something that was very clear when they posted the notice for this workshop was that it was an open call, but explicitly intended for advanced puppeteers with a certain degree of experience/training. 300 applied and they only had 50 spots. There were a lot of talented people who didn't get it.

If anyone reading this thread wants to break in to that puppetry world, a really good idea is to apply to attend the O'Neil Puppetry Conference. You meet amazing puppeteers, make great connections and get taught by some of the best puppeteers in America, including Marty Robinson who taught this Sesame Street workshop. I'd also make an effort to attend a Regional Puppeteers of America Festival, and the National Puppetry Festival in 2015. Get to know everyone you can, work hard and always be polite, professional and helpful. It won't happen overnight, but doing things like that will open a lot of doors for you.

More than one person who started out in this forum has taken that path (or one similar to it) and ended up working as a professional puppeteer in television over the years. It takes a lot of hard work, patience and a bit of luck, but that could be anyone reading this thread too if they really want it more than anything else.

Here's a photo from the workshop: 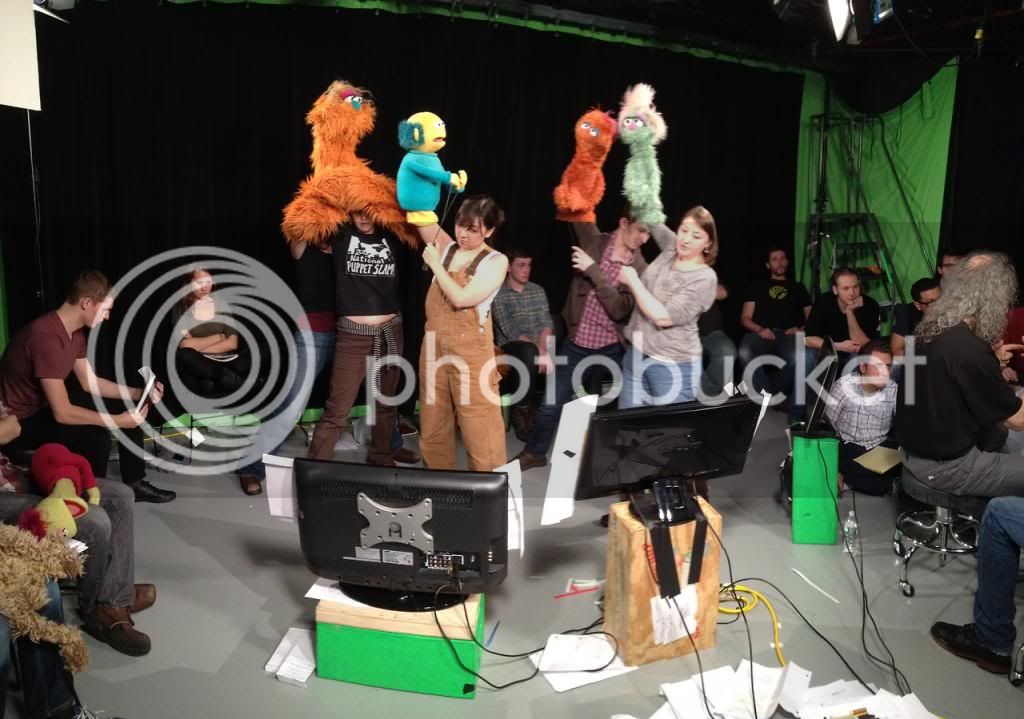 It kind of hurts to look at it, what with not being accepted and all, but good for these folks. And I see Rachael from the Mindset videos in the back there.

If anybody here is able to go, there is a great looking workshop in Denton Texas in May--the "Beyond the Sock Workshop." Instructors will be Noel MacNeal and Peter Linz! I just registered, and I think it would be a great alternative for those of you who (like me) were maybe not-quite-ready-for-daytime-television. I'll post the link here, but if it deserves its own thread I can do that too (or someone else can).

Buck-Beaver said:
Something that was very clear when they posted the notice for this workshop was that it was an open call, but explicitly intended for advanced puppeteers with a certain degree of experience/training.
Click to expand...

Actually, they didn't say that at all. At least, not that I can recall, and I believe I read over their instructions at least three times; I believe they said they were looking for puppeteers who were familiar with the Sesame style of puppetry and were looking to hone their on-camera puppeteering talents and skills... I do not recall reading anywhere that they were specifically looking for "advanced puppeteers with experience and training". If that were the case, I'm sure a lot of us who sent in submissions would have been ruled out for being too amateur, being inexperienced, or have had no formal training. The latter certainly applies to me, because I've had no actual training as a puppeteer, I'm self-taught. I did my homework, I studied a lot of behind-the-scenes footage of various different Muppet/Henson productions, I read up about certain things like the Henson Punch and such, and I practiced and played around with puppets for a number of years before actually becoming a puppeteer. Ehhh... I doubt I'm really "advanced" or anything, but I can certainly say I'm experienced: I learned how to work with monitors, and how to work on live TV, both at the same time, and as I've said before, Ed May has said he found no flaws in my performance techniques whatsoever. And anyone can look at the stuff I have on YouTube, and you have to admit, for lack of any kind of professional or sophisticated equipment, I think I've done a pretty dang good job.

I knew getting in was a long shot, and that chances of getting in were pretty slim, but it seems like ever since details of the workshop itself were finally made public from those attending, there's been all kinds of scuttlebutt about just what exactly they were looking for, or what exactly the purpose of the workshop was, or what exactly entrants were supposed to in their videos (again, they said they wanted originality; Chris says this so-called "source" of his says they were looking for people to take on already-existing characters should anything happen to any of the older Muppet Performers, which doesn't make too much sense).

I guess what I'm getting it as that there seems to have been some kind of miscommunication somewhere along the line.

this thread is getting a little.. ridiculous. and bitter. lets move on, the workshop did, all of those puppeteers was chosen for a reason, while others were not chosen , instead of throwing a passive aggressive pity party, continue to work on your craft seriously. The puppeteers that work for the Sesame Workshop and the the Jim Henson Company are the best at what they do, and it takes years to get anywhere near that caliber, and they didn't do it by throwing passive aggressive bitter pity parties. I get it your disappointed, well that's life, what doesn't kill makes you stronger. Enough.
You must log in or register to reply here.
Share:
Facebook Twitter Reddit Pinterest Tumblr WhatsApp Email Link
Top