Last I checked, Gentle Giant still had them.

I'm glad they are coming out with this set. I know the price is steep and some people will end up with duplicates, but I think Diamond Select is trying their best to produce a complete albeit smaller set of figures. 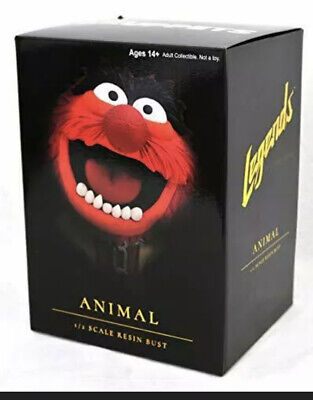 <p>Brand new in box shipped free priority mail. This is a limited edition piece only 1000 made. I have cheapest price on eBay. Legends In 3D The Muppets Animal 1/2 Scale Bust Limited Piece /1000 New In Box.</p>
www.ebay.com

Nice find... something bothers me about that bust though... I don't know if it's the eyes or what.

It looks like they’re doing rereleases, but mixing which figures are packaged together and excluding some like Crazy Harry & Mahna Mahna.

Fozzie6 said:
It looks like they’re doing rereleases, but mixing which figures are packaged together and excluding some like Crazy Harry & Mahna Mahna.
Click to expand...

Is there a source for this?

Interesting.... looks like they are just tossing out the heavy hitters with Muppets NOW Launching. Looks like these will have reduced accessories. Don't expect a balcony to come with these. Not really sure how they are even making money on these. At 64.99, starting out on sale, they are less than $11 per figure. $13 for the set with Chef is you don't count the chicken as a figure. Compare that to the EM set at $24 per figure, though they also come with a lot of accessories. Also, interesting that they left out the Camilla figure that came with Gonzo and will instead use the non-articulated chicken that came with Chef.

Certainly a bargain for people that passed on the first releases and only want the main characters with some well known secondary ones mixed in. Looks like there is no need to buy these if you already have the originals. Could this lead to a Sam and Rizzo release, with maybe even 2 Snowths mixed in for good measure?