Unfortunately this appears to be a certain issue with some episodes from seasons 22-24.
S

This same prop, or at least one very similar, appeared in two episodes from the mid-70s.

In one episode, the huge trash can appeared as part of the show's plot, but I'm really not sure how it figured in (I don't think it was related to Oscar). But in the final scene, Oscar was happily inside the can, and instructed the kids to throw the trash on the street into it. As the closing music started, Oscar can be heard muttering that it would take about a week to fill. A Shangri-La for Oscar, no doubt.

The other episode was where The Amazing Mumford thought he was losing his magic ability, or "...every last trick in my repertoire has said 'au revoir'". Oscar, however, was pleased to watch a "grouch magician" whose tricks don't work. So Oscar goes down in his regular can and retrieves his kitchen trash can (about the size of a tall boy beer can) and has Mumford turn the little can into a big can. After a few tries with the trick not working, he finally succeeds and Mumford is elated, since the adults told him not to give up. But all we saw was that huge trash can again; it appears that the "little can" was Oscar's usual abode, and that was turned into the giant one. We hear Oscar saying "Help, somebody get me out of this can. Rats!" 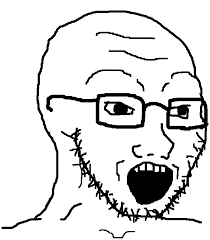 Okay this one definitely had a frustrating Snuffy miss:

Me no think either of dem Claudius.