Tonight make plans to watch "The Muppets" one-hour season finale beginning at 8:00|7:00c on ABC. Then join the discussion immediately afterwards in the Muppet Central Forum.

In the second half of the one-hour season finale, Kermit asks musician Jack White for advice when he and Miss Piggy take another look at their relationship after she gets out of the hospital. 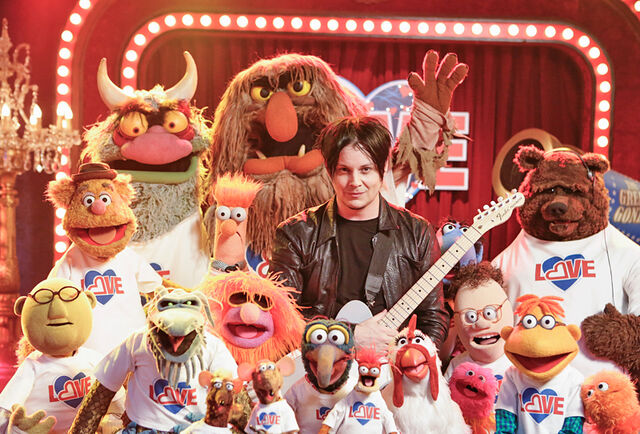 · Rowlf and Kermit in the cold opening were priceless! Rowlf is such a sweet heart. I adored the comment about being a registered as a therapy dog and Kermit petting him. The coin-toss was a nice way of showing Kermit going about things the wrong way.
· So many Muppets! Howard Tubman! Those creepy babies! Marvin Suggs and the Muppaphones! Link, Crazy Harry, Mahna-Mahna and the Snowths! DROOP of all obscure Muppets got a line! It’s just a pity Walter wasn’t in the throng of plus 11’s!
· The Rizzo and Yolanda side-story was cute and a nice little addition to the theme of love.
· Poor Gonzo got left out, but I can’t see where he would have fit in. Fozzie filled the spot of the best friend talking Kermit out of re-starting a relationship.
· The waffling joke was perfect!
· The Team Love vs Team Friendship was a great way of keeping the others involved in the episode.
· The Kermit-Piggy saga was dealt with carefully and I appreciated that Piggy didn’t just jump back into Kermit’s arms. Kermit made a few mistakes (thanks to the Muppets interference), but at least he knew they were mistakes.
· How on earth did I guess that a plane would somehow be involved in the ending? Kermit’s admission was adorable. Let’s just hope we get to see what Piggy was going to say before she fell asleep!
· Pepe…….Just Pepe being Pepe.

The puppetry in this episode blew my mind. Little moments like Chef throwing the waffle to Piggy, Piggy standing against the doorway, Kermit jumping OUT THE WINDOW and Kermit tossing the coin. All of it is just part of the professionalism and skill the Muppet Performers have that you will not find anywhere else in the world. There is nothing that the primary and secondary puppeteers can’t make happen when they work together!

As far as solo performances, everyone has been sensational, but there are three puppeteers that have gone above and beyond:

Matt Vogel: This man is a superstar! With Constantine, Matt showed us he was a great performer. With Uncle Deadly, he became a force to be reckoned with. Of course, Floyd Pepper, Sweetums and Robin are included in this, but just like Miss Piggy on TMS and Pepe on MT, Uncle Deadly is the break-out star of this show and it was very much deserved. Every bit of Matt’s performance is calculative and perfect; the lip movement alone is meticulous and when you add the gesticulation of the hands and the annotation of the voice, there is no stopping that tour de force of awesomeness!

Eric Jacobson: Like his predecessor, Eric seems to be a perfectionist, which is important if you’re performing characters originated by Frank Oz. Piggy, Fozzie, Animal and Sam are difficult characters to keep from being completely one-note due to being based on single elements. Piggy is pain, Fozzie is lack of self-esteem, Sam is (for the most part) conservativeness and Animal is all food, sex and music. It’s easy to understand how long it has taken for Eric to get the characters back up to scratch, especially Piggy and Fozzie. His puppetry has always been on point, but the character development just needed to catch up with his performance.

With decent writing and Eric’s perseverance, Fozzie has returned to the vaguely self-aware, innocent, confident and loyal friend of a bear he was meant to be all along. With a bit more careful tweaking, Fozzie may even be able to beyond this. As for Piggy, like I said, she is pain and bringing the pain back is working wonders. Eric conveys her inner conflict so well, especially in these last two episodes. Piggy doesn’t necessarily need to cry or have quiet moments, just being a little more word-centric and behaving accordingly will flesh her out quite well. I think it’s the humanity Eric brings to all of his characters that makes all the difference.

Steve Whitmire: As if I wasn’t going to put a spotlight on this guy! What isn’t there to say about this brilliant man? And I’m not just doting on him because he is one of my most favourite people in the world!

It doesn’t matter whether Steve is puppeteering Rizzo, Beaker or Kermit, you can always tell that he is continuing to play with the characters, experimenting to see if he can push the performance just that little bit further. Rizzo doesn’t move as stiffly as he used to, Beaker gets more and more lively with each appearance and Kermit’s range of expression has pretty much exploded.

Of course we have to talk about Kermit. His voice stopped being important a long time ago and now there is a new focus on what you to do with such a malleable Muppet. Within 16 episodes, we have seen Kermit grin, talk out the side of his mouth and make faces where I can’t even imagine the ungodly things Steve is doing to his hand to achieve. Steve and Mike Quinn are a dream-team; Rainbow Connection is a prime example of those two working together flawlessly.

I could gush about Steve all day, but to sum it up, if you’re looking for the perfect example of someone who can push phenomenal acting skills through his hands and vocal expression through his voice, Steve is the man you are looking for. Steve stopped being one of Jim’s replacements a long time ago, and now in his prime, stands as one of the best performers in the world.

I thought this episode was magical! Yes, that's the word I'm describing it with.
"I ask permission to maul the next person who asks if I'm the bear from The Renevant" is probably one of my favorite lines in the show now. Loved Rowlf's bit at the beginning!

Oh my gosh! Those two episodes were the absolute greatest things i've ever seen!! Easily the best of the season.

All the main characters were great and played off of each other very well. Loved that we got to see so much Rowlf,if this is the last episode than it's great that he finally had more to do.

Veteran's Hospital was amazing. I especially loved the lady's reaction to Rowlf and Janice,

just classic. I wonder if Uncle Deadly introducing the sketch was a nod to his original performer Jerry,who was the Muppet Show announcer back in the day.

I thought Pache's(Pizza's ?) exit seemed a bit rushed but it was still pretty sweet. I was a little surprised that we didn't see Lucy (the network executive) at all during either of the episodes.

And I spazzed out so much when Kermit and Miss Piggy said they loved each other, even if Miss Piggy was high on loopy gas.

I freaked out even more when I saw all those characters like Marvin Suggs,Howard Tubman,Mahna Mahna and especially Link Hogthrob.

And,oh my gosh, DROOP HAD A LINE!!

This was an all around awesome episode and I really hope it's not the last. But if it is the last episode than i'm very happy with the way the show ended.

This was a pretty awesome finale. I loved seeing so many Muppets return and we got one last glimpse of Sam crushing on Janice. Please contact ABC and tell them we want season 2.

what was the line the Droop Said?

Did I seriously see Droop, Howard Tubman, Bubba the Rat, Marvin Suggs and the Muppaphones, Mahna Mahna and the Snowths, the Babies, Link, Old Tom, a reference to Geri and the Atrics, and a possible reference to Seymour?

I think this was the best episode of the season! So many minor characters came back, Droop, Beauregard, the babies from the baby band and Mahna Mahna and the Snowths! I also liked the part where Rizzo, Yolanda and Pepe were using Pache's phone for crank calls and Miss Piggy high on Morphine, priceless! Also, who knew Piggy had a high pain tolerance? Plus it's great some Muppet Show sketches coming back, Vet's Hospital and Swedish Chef and even Muppet Labs! I really hope it gets picked up for another season!

I doubt it makes much of a difference, since comments from both episodes are likely going to be jumbled together no matter what, but there is a seperate thread for discussing episode 15 (a.k.a. "the first half").