We should all treasure the moment. As a life-long Muppet fan who started one of the first Muppet fan sites almost 16 years ago, it literally feels like the Muppets heyday from the late 70's and early 80's all over again. Simply amazing.

This is the big one that will have us talking for awhile...

After you finally see "Muppets Most Wanted" on Friday March 21, please post your thoughts to discuss all aspects of the movie. Spoiler warning: If you do not want to know everything about the film, then please do not read any further.

If you would like to write an official review to be considered for publication on MuppetCentral.com, please submit your review by Thursday March 27. (We've intentionally not published any reviews until the film's official debut.) 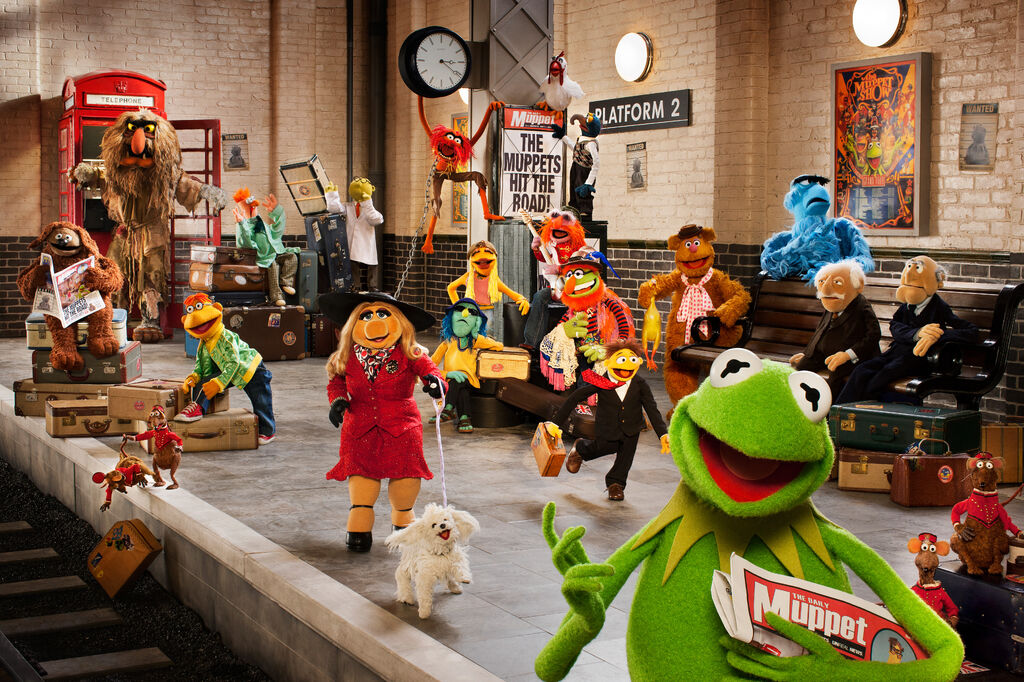 Saw the movie last night and I absotively posolutely loved it!

The one quibble I have that knocks it down from "perfect" to "great" is the ruining of the wedding ending in what others here might call the "typical namby-pamby non-commital frog" Yes, it does allow for Piggy to unequivocally know which of the two frogs is "her" Kermit, but still, that was one of the two optionsI predicted the entire wedding scene would have.

1 Saw the movie with my best friend who relayed to me the various location/time updates throughout the scene changes as the Muppets travel through Europe. In the Spanish version, these would be announced out loud for the entire audience to hear by a voiceover narrator.

2 Fourth-wall brakage by Walter as the ending of The Muppets is used for the beginning of MMW.

's line of "I don't mean to be a stickler, but this is the seventh sequel to our original motion picture."

: "Fozzie! Did you even watch our last movie?"

made that much funnier than it would have been otherwise.

6 The best part of the Madrid show was

's indoor running of the bulls. "These bulls are out of control! Who could have forseen such a thing? !"

7 I so agree with the hecklers after the opening number in Madrid.

Incredible, they've done the impossible, I diddn't think they could do it!"

8 Much like "Me Party", "Welcome To The Big House" is my fave song from this movie.

discover Constantine's plans and leave to rescue Kermit...
Constantine: "Walter and Fozzie have quit the Mappets."

"What? Walter quit? We just did a movie about how he joined the Muppets."

"Yeah, some might say at the expense of other long-standing beloved characters."

10 The clips of Kermit included not just the SST News Flash sketch, but the introduction from the Lynn Redgrave Robin Hood episode from the Season 3 DVD set—why haven't Seasons 4 and 5 been released yet Disney?!?—and a brief moment of Kermit singing The Rainbow Connection from TMM.

11 The fact that Danny Trejo is treated as a fourth-wall character. During the gulag review's auditions he says he's not learning a new song. He's a triple threat: a singer, dancer, and murderer!
My friend: "Machete Kills!"
And then when Nadya's saying "good night" to the prisoners she clearly says "Good night Danny Trejo".

12 The song the prisoners sing about how they hope they get the part during the auditions, it reminds me of the musical the MST3K gang put on as a host segment at the end of the short "You're Hired!"

13 The Kermit shrine Nadya has built in her office.

and Jean-Pierre Napoleon... It makes me think there's an American Dad stand-offish Stan Smith vibe going there, especially when they tear up saying their goodbyes at the end of the film.

16 We had Muppet Doctor in MFS, Muppet Man in TM, and now Muppet Ladder in MMW. Won't be surprised if we get something like Muppet Chain or Muppet Totempole in the next movie .

got a couple of decent appearances delivering headlines and Foo-Foo had a supporting role in supporting Piggy.

18 A vonderful surprise finding Uncle Deadly playing the organ where he belongs during the wedding scene.

19 Kermit calling Piggy "my woman" in the helicopter confrontation.

20 The Muppet character fireworks at the very ending... They got that from the celebrations we used to have at the MC Dorms.

Overall I loved MMW and laughed the entire way through.

I loved MMW it truley made my favorite muppet movie! It was perfect! Loved all the muppet cameos! Im so glad Bobo, uncle deadly rizzo and pepe and robin got a line!

I saw it at an early screening last night in NYC. Without ruining anything for others, I have to say this film made me really, really happy. I'm an old school fan and while I don't want to say I've disliked stuff since Jim Henson passed, because that's not entirely true, the films to me since have never held up to the original 3. This one definitely did, in my opinion.

I really felt this film lived up and brought back the Muppets I remembered as a kid, from the characters' personalities, to the wackiness and randomness of silly stuff, there's LOTS of great use of older Muppet Show bit characters, and the music was amazing. I will say, to sit through the entire ending credits, lots of fun Muppet stuff in there too. Really was very pleased with this film, I think the cast and crew did an amazing job and gives me hope for another Muppet film and future projects.

My friend and I sat through the credits, with Fozzie's little interruptions. I thought there were supposed to be two "In Memory Of" credits at the very end, one for Jerry Nelson and another for Jane Henson. Yet, my friend said he didn't see such honors. Is this true? If there were such credits, when do they appear?

The Count said:
Something that I'd like to ask...

My friend and I sat through the credits, with Fozzie's little interruptions. I thought there were supposed to be two "In Memory Of" credits at the very end, one for Jerry Nelson and another for Jane Henson. Yet, my friend said he didn't see such honors. Is this true? If there were such credits, when do they appear?
Click to expand...

Yes they are there towards the very end.

The Count said:
Something that I'd like to ask...

My friend and I sat through the credits, with Fozzie's little interruptions. I thought there were supposed to be two "In Memory Of" credits at the very end, one for Jerry Nelson and another for Jane Henson. Yet, my friend said he didn't see such honors. Is this true? If there were such credits, when do they appear?
Click to expand...

Im going for time #2 in theaters in an hour!

I loved it I was totally feeling out over it...I had my reservations after the whole
Muppets from space thing...but this blew my mind!!
Nothing but good things to say about it!
O

My wife and I saw it last night. Loved it!

I only have two complaints: In the opening song the lyrics suggest that the movie will be called Muppets Again... cut to title: Muppets Most Wanted. It was just a little weird.

Also, the "Wall." I thought that was a stupid idea.

Other than that I loved it.