The Muppets Episode 8 - Too Hot to Handler

Tonight make plans to watch "The Muppets" new episode "Too Hot to Handler" at 8|7c on ABC. Then join the discussion immediately afterwards in the Muppet Central Forum.

Episode 8 - Too Hot to Handler

Scooter books his crush, Chelsea Handler, who spices up "Up Late" and his personal life. Meanwhile, Kermit learns that Becky may be hiding her past from Fozzie when he and Denise go on a double date. 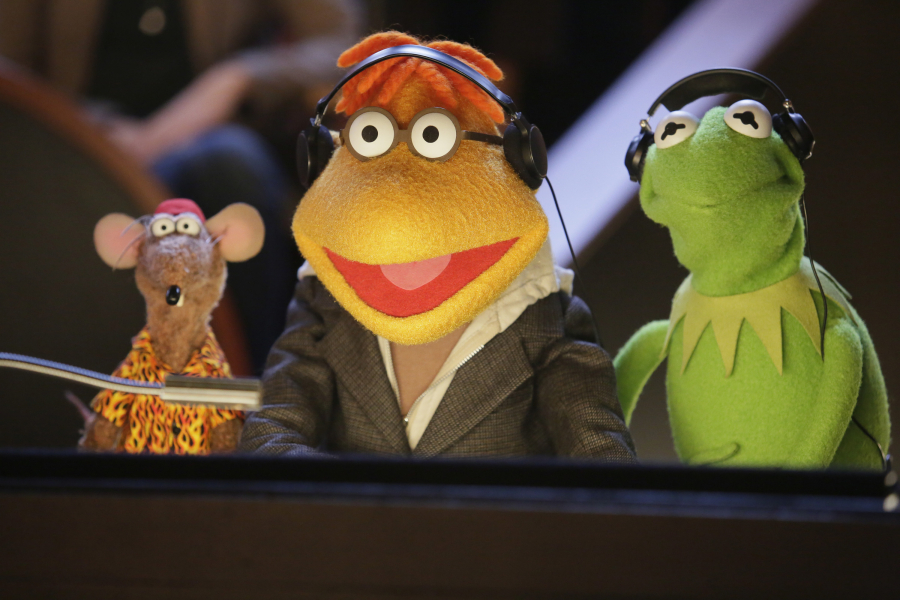 This was an okay episode.

The romantic A-story between Scooter and Chelsey Handler wasn't as cringe-worthy as I was dreading. In fact it was good to see Scooter get another main story in this episode.
Was happy that the gang had another event night at Rowlf's Tavern, this time Trivia Night.
The whole bit where Kermit got suspicious of Becky using her phone reminded me of the 20 Questions oneshot in WebMistressGina's fic thread, if only because of the story Denise told about her mother not having a permit to keep so many tigers in her barn.
Got a laugh out of this episode using the talking heads bit as a running gag where Kermit's actually talking to someone else instead of doing one of those interview thingys.
Oh, and I also laughed at the Mayhem thinking Kermit got replaced by a robot which led to the end stinger where Animal is thought to be a robot also.

So I'd give this episode an okay pass, mostly because it didn't go as horribly as I thought it would concerning Scooter.
*Waits for the fanfics pairing Scooter and Chelsey to start popping up, given that the guy's so popular there already.

Got a laugh out of this episode using the talking heads bit as a running gag where Kermit's actually talking to someone else instead of doing one of those interview thingys.
Click to expand...

Yeah. That was classic.

The show just keeps getting Better and Better each week!

I really love what they've been doing with Scooter in the series, and I always love seeing Kermit & Fozzie paired together!
A

Not a great episode. Neither storyline was anything brilliant, the Scooter/Chelsea story seemed to move too quickly in terms of her falling for him, and the Fozzie/Kermit story was just there. But there were enough little gags to keep things interesting, like no one listening to Kermit and Denise's story about her uncle.

After reading toughpigs' review, I realize that the writers didn't follow using that gag with Kermit's solo spots a third time. C'mon, that's one of the laws of comedy, the Rule of Three as demonstrated by Slappy Squirrel at Walter Wolf's faux funeral. *Animaniacs reference.

embracing his inner Cookie Monster-ness at the end of the episode.

That my kind of fella.

Okay episode. Not non-stop hilarious, but certainly not unfunny.

It's clear more attention is being shifted towards the characters than the jokes, which is certainly fine.

I liked that Scooter was the one who felt his relationship was moving too fast. Just shows how innocent he is.

Bobo was great, with his pencil conversation and offering Kermit a hug... also got a kick out of Pepe and Rizzo agreeing that the Chef probably doesn't wash his hands.

Interesting to see Piggy take a backseat in this episode.

I liked the episode. Miss Piggy stepped back from the spotlight to let Kermit and Fozzie and Scooter enjoy some time in it. Scooter's physical gag with his hands was very funny and great puppetry. Also I have noticed in previous episodes and noticed twice in this episode the way that the puppets move when standing up (such as Miss Piggy rising to greet Chelsea) or sitting down (Scooter hopping up on the stool next to Chelsea) are excellent little details that make their movement so much more fluid and realistic. The episode did not have the heightened chaos of last week's, but I did love the mini scene of chaos by the elevator as every character ruins Kermit's plan by shouting out the answers. And then add just a smidge of sweetness with Bobo offering a hug. I think the writers had a nice balance for Fozzie. He's naïve and maybe prone to missing the point from time to time, but he's not stupid. And I liked when Fozzie stood up for himself was well written and well performed by Eric Jacobson. I also appreciated the ridiculous promos in between the serious and heartfelt lines. And Kermit of course will still be around for Fozzie to make sure he doesn't get stuck in a fan.

This was a good episode.

Nice to see that Denise and Becky have not been forgotten about,
Great to see Scooter Pepe and Rizzo get focus
Zoot Chip Carl Bobo and Deadly get great lines.
Scooter's love for Chelsea Handler was better than I expected.
Kermit and Fozzie's friendship was nicely handled.
Its always a pleasure to see Rowlf

As for the problems.

Well the band thinking Kermit and later Kermit are robots, i dont agree with Ladywarrior on them being stoners but, they felt a little too clueless mainly Floyd and Janice.
That Scooter's mom thing can go away, it weird and not in a good way.
You must log in or register to reply here.
Share:
Facebook Twitter Reddit Pinterest Tumblr WhatsApp Email Link
Top