Kermit and Miss Piggy pretend to be a couple again for Robin's benefit. Meanwhile, Gonzo spends all his free time with Camilla, so Pepe and Rizzo look for a new pal. 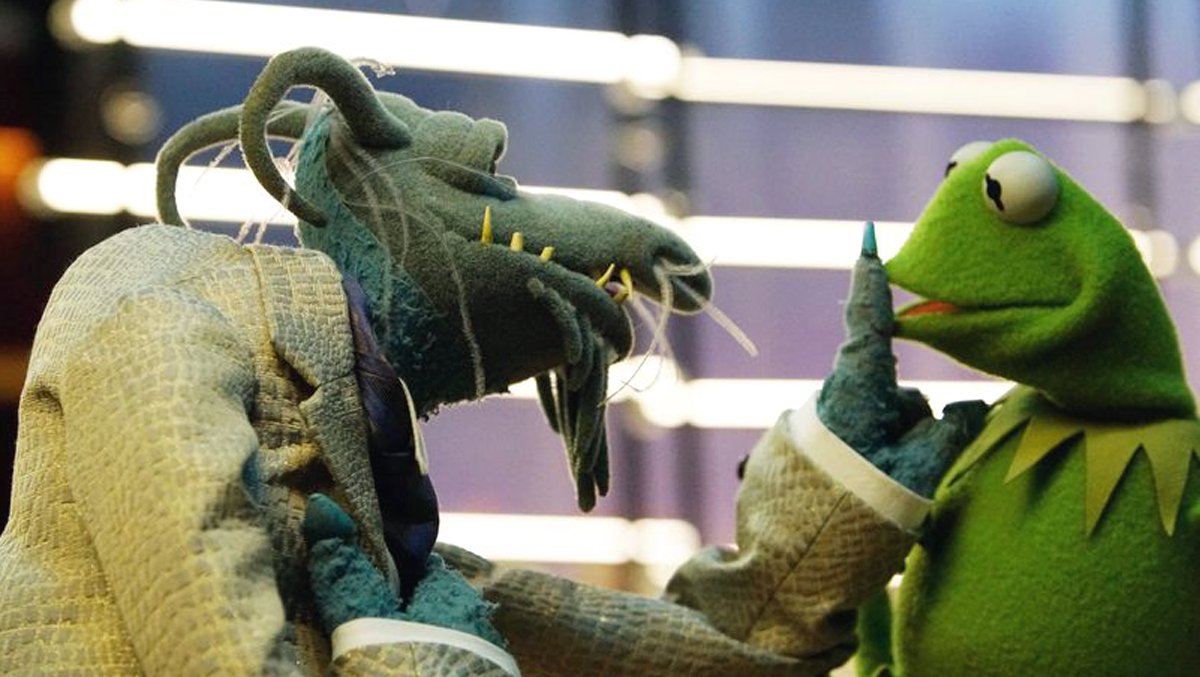 MONDAY FUNDAY! This was great!

This whole plot line surprised me more than once. I was expecting to see Kermit doting over Robin, but wasn’t expecting him to be so full of beans about it. Jump scaring Robin and Scooter was hilarious and it was refreshing to see the frog being so relaxed and playful. Miss Piggy also caught me off guard with her reaction to Robin’s arrival, but I suppose it only makes sense that they have spent some time together in the past.

It usually irks me when old sitcom tropes are used over and over, but The Muppets always seem to make it fun. I don’t blame Kermit for wanting to protect his nephew from the truth. Parents getting divorced is bad enough without knowing that a couple Robin seems to hold on a pedestal has also given up on love. Piggy was wonderful this episode. Genuine sympathy for Kermit’s break up and agreeing to keep up the charade shows that Piggy really is improving.

I never thought I’d say this, but Piggy is getting close to being in my Top 5 Favourite Muppets. She’s just behind Kermit, Lips, Rowlf, Rizzo and Beaker.

All in all, the plot was predictable, but sweet and what you’d expect for anything to do with Robin. There was a heap of great Muppet moments when Kermit asked them to play along and Laser Tag was an awesome Muppet first. Watching Kermit and Piggy team up reminds you why they lasted as long as they did. The camaraderie was fun to see from those two again and it continued until they were at Rowlf’s Tavern.

Let’s hope we see Robin again someday soon. Matt Vogel obviously had a hard time keeping the voice true to Jerry Nelson. Robin (and Gobo Fraggle for that matter) are particularly hard due to their voice being so similar to Jerry’s natural voice. Matt’s overall performance was that clean and good that I really didn’t mind it.

I really don’t have much to say about this one other than I enjoyed it. It was another sitcom trope with a girl gate-crashing a bachelor pad. There was some excellent puppetry with the couple’s yoga, even if Gonzo did accidently kick Camilla in her dark meat! We found out why Rizzo won’t date snails and Drunk Pepe being rejected by his GMA crush after one too many photo-shopped bath photos. And if course we can’t forget Chip, Sam and Big Mean Carl somehow winning the hearts of women that are waaaaaayyyyyy out of their league!

· Great opening scene with Zoot and Kermit: “It said ‘fire door’, so I didn’t want to risk it.”

· The entire cold opening was fun. There was a great reference to Robin not aging or growing a single inch. Very clever Muppet writers! Bravo to you!

· I loved seeing the entire troupe messing around and watching Fozzie trying to toss the ball into Big Carl’s mouth. One big insane family.

· So many great character moments here! Fozzie’s acting skills and everyone scrambling from Robin.

· Any excuse to give Sweetums more screen time is a good one. Even if his goldfish died!

· Scooter, you idiot. “Oh no, you made the first person to lie on Twitter!

· “I’ll go easy when life does”- We all feel that way sometimes.

· Piggy and Kermit have become the new Bones and Booth for me. Especially in the last scene when they find an obscure way to say that there is still something between them without actually saying it.

· “NOT HELPING!”- Thank you Rowlf for being the amazing comedic relief you are.

Best show of the season!
A

This episode was pretty funny. It was wonderful to see Robin, Uncle Deadly got a huge laugh outta me when he said he has other secrets, Janice being a hippie and Floyd being a conspiracy theorist during the Friendly Feud game was great, the end where it's revealed that Camilla's friends are smoking hot human girls and they have a pillow fight where Camilla loses her feathers was hilarious.

Wonderful episode! Great seeing Robin! As of tonight, I think were getting one step closer to the frog & pig getting back together!!!

Robin is adorable though his voice sounds like he got stepped on by an elephant.
A lot of the jokes were funny and I am happy gonzo and camilla are back together because I wanted them back together.
Miss Piggy playing laser tag is entertaining.
Deadly showing up is always a plus.

bad things
STOP MAKING THE ELECTRIC MAYHEM ACT LIKE BRAIN DEAD IDIOTS!
seriously. Janice has NEVER been that stupid and Floyd has never been this out in space about the world. whose great idea was this to make floyd a paranoid conspiracy theorist? I HATE that! HATE! If they don't knock that garbage off I'm going to stop watching the show because the mayhem is some of my favorite muppets and they have NEVER acted like that before.
Also Robin is 5 years old WHY is he allowed in a bar?
ENOUGH with the side plots with rizzo and Pepe. JUST STOP!

All I can say is this was a huuuuuuuuuge improvement over last weeks rather blah episode.

Carl eating Foofoo was hilarious. Hey, he got the ball, and he's happy.

The gag with the Electric Mayhem on Friendly Fued and they couldn't name one of the flavors of ice cream they were surveyed on.

Kermit and Piggy tagging Scooter, their own teammate, on laser tag because he couldn't keep his own mouth shut.

4 out of 4 stars. I wish the other episodes are like this.

This was definitely one of the best of the season.

Robin was adorable and his voice was actually pretty easy to get use to by the end. Piggy was also great in this episode since it showed how much she cared about Kermit and Robin that she would pretend to still be together with him just for Robin's sake.

Fozzie and Rowlf finally spoke and was in the episode longer then a few seconds too!

I also enjoyed Pepe and Rizzo's plot. I did enjoy Robin's more though. I just really wish we could've seen Gonzo and Camilla actually get back together and have more then a few seconds scene together. And have an actual conversation.

Liked this episode. It was nice to see Robin again and I adjusted pretty quickly to his new voice. I can see why Kermit wanted to avoid disappointing him after his parents had broken up, but he took the news well in the end. Plus it showed Piggy being able to extend past herself and show concern for someone else.

The little bits were also fun, seeing Rowlf again and then hearing about Pepe's bathroom pictures. My only quibble would be that we actually didn't see any of them, it would have made for a funnier end then the pillow fight scene.

Looking forward to next week.

"My mom likes quiet nights and my dad likes my teacher."