Did Cool Counting Collection even come out today? I can’t find it on Hoopla and the wiki doesn’t list any segments.

Yes it did. It's just not on Hoopla yet.

Just as well, my account is broken anyway.
M

I went to one store and didn't see a copy, but I rented a digital copy, watching it now. I did a quick skim through and didn't notice anything too "must have".

minor muppetz said:
I went to one store and didn't see a copy, but I rented a digital copy, watching it now. I did a quick skim through and didn't notice anything too "must have".
Click to expand...

Just looked at the description on Muppet Wiki, and yeah, I’m not missing much.

I do kinda wanna know what “The Silliest Counting Show Ever” is, though.

CoolGuy1013 said:
Just looked at the description on Muppet Wiki, and yeah, I’m not missing much.
Click to expand...

I started listing segments as I watched it, but had to stop watching for a bit. I'll add the rest later unless somebody beats me to it, still got to add in segments for numbers 11-20.

For those hoping there would be classic early segments, so far the oldest segment I have found is "Cloud Nine" from either season 25 or 26. Not many other fullframe segments so far.

Thank goodness for the Muppet Wiki pages guiding the various number segments. I kept two tabs open so for segments I don't recognize (mainly just the animation and live action films) I could at least find the first appearance (and with most of the segments being in widescreen, I can just go down near the bottom of the various galleries).

So…… I guess this one is worth skipping over?

EDIT: Okay yeah. Big no thank you for me
M

I finished watching it and filled the sketch rundown on the wiki.

In a way, it’s disappointing, but at the same time, there are segments that I enjoyed a bit. It doesn’t really have anything I would have included if I had compiled the segments, and I especially wouldn’t have been too aware of many of those animated segments, but I did enjoy the penguins at the movie theater, and Lonely 11, and Thirteen’s Not So Lucky. And I enjoyed that Big Bird and Snuffy segment, and was happy to finally see some of the new Martians number of the day segments.

I think I enjoyed it more after the video went past the number 10.

I liked Awesome Alphabet Collection (mainly for a lot of the previously-unreleased classic segments) but it also felt very repetitive with many of the other alphabet-themed videos, while this one does have a lot of segments that have previously been released on video, it actually feels less “repetitive” with past numbers videos (another example of repetitiveness I have is Count on Elmo including many of the same segments as Elmo’s Super Numbers, and on both videos, if you don’t count the Number of the Day in the credits for Count on Elmo, the only Muppet segment featured the same starfish).

I would have liked some classics, like Awesome Alphabet Collection did. To be fair, it does have some segments from the 1990s, and in the last decade it feels like the “classics period” has extended to the 1990s (and maybe the early 2000s). Would have been nice to have included some 1969-1990 segments, some older Count segments and number animations. If not as part of the main program, then a selection of bonus classics (a few nights ago I dreamt that I had gotten the DVD, it had bonus segments, but I quickly saw that everything was from 2008-present), maybe some segments with characters more considered “old school” (like Biff hanging Savator Dada’s paintings, or Roosevelt Franklin Counts).

Classics would have especially been more welcome than including two different installments of The Count’s Number of the Day Song or Cookie Monster’s “How Many Cookies?” or (even though I was interested in seeing them) the Yip Yip Number of the Day, as the main difference between the various installments is the featured number (in fact, this also has two different segments of a family portrait, a series of segments I was not previously aware of).

I wasn’t expecting it to include part of Sesame Street Presents the ‘80s. I had hoped the whole thing would get a DVD release someday (now I won’t be surprised if it’s included the next time they put out a music-themed video release), I guess the videos format does lend itself well to just including portions of the video.

Overall, I am glad that I saw it, but I am also glad I only rented it as opposed to purchasing it to keep.
M

You know how disappointed we all were with Cool Counting Collection and it’s lack of variety (especially in comparison to its Alphabet-themed counterpart)? Well, after a bit of thinking, I created this Google Form where you can vote for your favorite segments for each number, and the ones that receive the most votes will be included in “Cool Counting Collection: MC Forums Style”.

Before you vote, though, I have some rules:
Vote here by July 23 (one week from today), and stay tuned for the results around July 24: 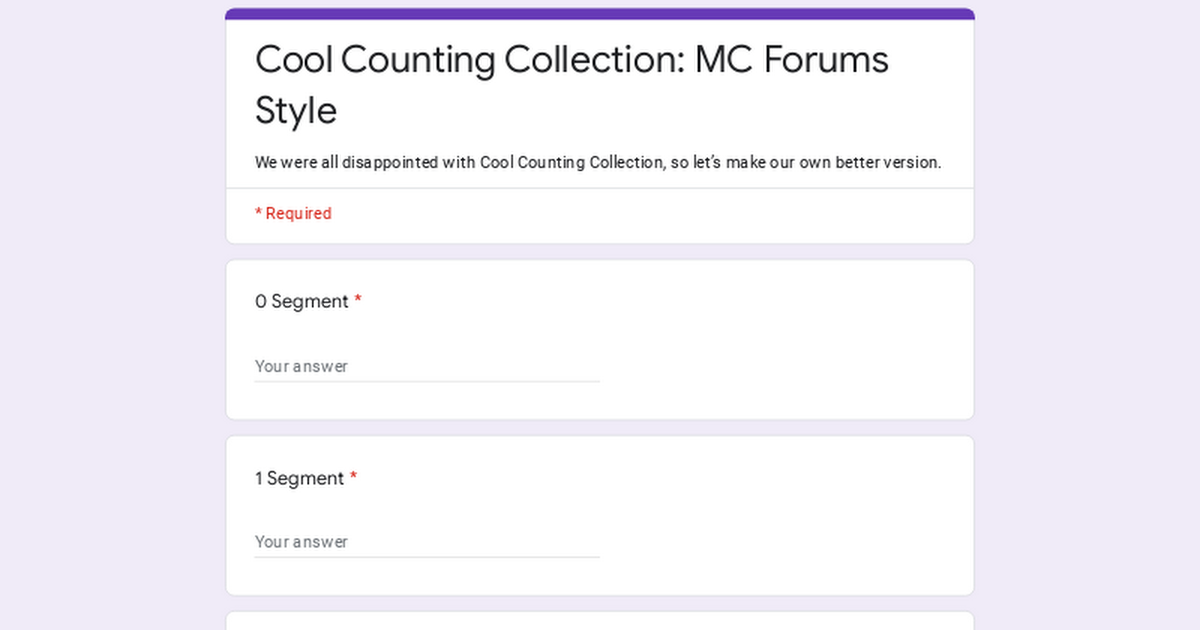 We were all disappointed with Cool Counting Collection, so let’s make our own better version.