Elmo loses his lucky baseball card before a game of tee-ball and says he can't play without it. When Abby, Alan, and Rosita tell Elmo that all he needs to do is practice, Elmo learns that he can still play without his lucky card. (Guest: Chloe Kim). 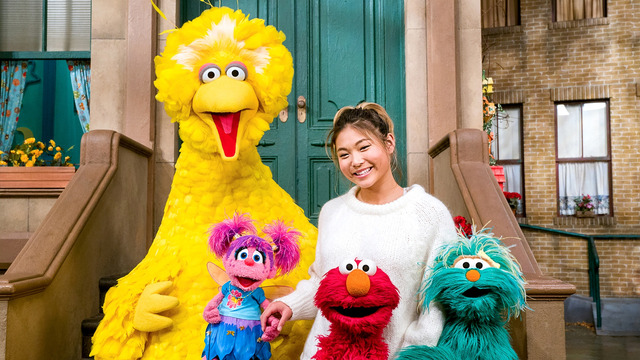 That was pretty fine, I suppose. I did like the slo-mo scene where he destroys the Hooper's neon sign.

I almost feel like this one was just trolling us . . . we've been commenting for a while about how there's an unusal perkiness to a lot of the performances, that everybody felt like they were just phoning it in this time: all of the kids, and even Alan felt like they were completely disinterested throughout the entire story . . . and, ugh, Beaver Elmo's back.

Was it just me, or did anybody else experience a lot of interlacing while watching this episode today?
A

I thought the girl leading the opposing tee-ball team's acting was fine. It's been a while since we've seen a human child involved in an episode plot. I liked Peter Linz's squirrel and the slow-mo portion. I liked the talk-show style bit with Big Bird and Chloe Kim.

Peter was the squirrel? I thought it was David.

I didn't think much of the talk-show bit, but man, the chromakey for that one was just awful: you could see blurry blue outlines every time Big Bird's beak moved.

D'Snowth said:
I almost feel like this one was just trolling us . . . we've been commenting for a while about how there's an unusal perkiness to a lot of the performances, that everybody felt like they were just phoning it in this time: all of the kids, and even Alan felt like they were completely disinterested throughout the entire story
Click to expand...

Imma be real here, can we really fault the actors for being bored with what they're given?

Not really, but I have to say, it was a rather disorienting experience. It reminds me of how animated and bombastic Nostalgia Critic used to be back in his glory days, and then he does a crossover episode with Nostalgia Chick, and he seems so bored and listless like he just phoned it in (though, to be fair, since #ChangeTheChannel sprang up, I've learned that Doug Walker genuinely was disinterested in any other producer's content that wasn't his own).

Yeah, maybe it's just the directing or Alan was just having an off day, but it does suck to see the humans get sidelined so much. Honestly, I can picture all of the humans disappearing sometime in the near future, especially with the Muppet characters' parents starting to pop up more.

I think there is a forseeable future where there is no more "Sesame Street", but there are new productions using the Sesame Muppets. Like the new things coming to HBO Max - talk show not taking place on the street, and an animated series where the characters are robots. Really feels like setting the stage.