And now the end has come...

In this episode, eliminated creature designers return to help the final three design, build and perform a full body mystical creature including props and special effects. Who will be crowned winner? 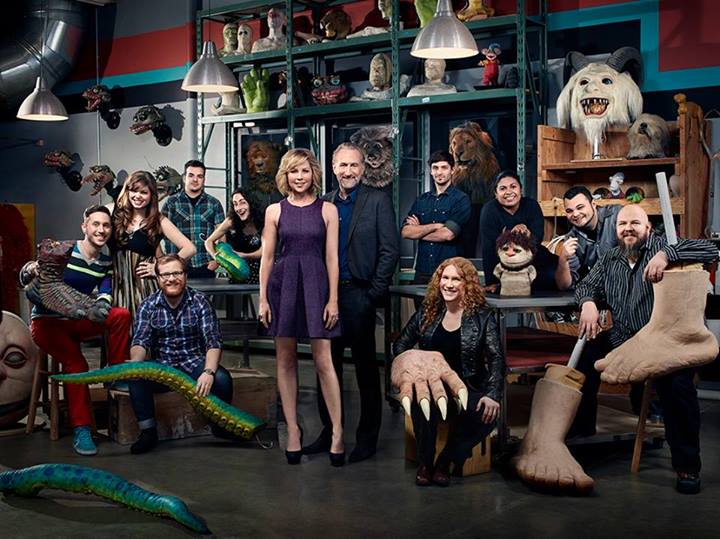 Show the Henson Company and SyFy your support! If you'll watch a second season of Jim Henson's Creature Shop Challenge please like this post.

And so we face the final curtain...

Full-bodied mystical creatures? With props and effects? With the eliminated contenders as helpers? Gathered at the local tavern? Okay, now I'm sold on the finale! I started by watching the second half of Faceoff, then fell into loving the Creature Shop Challenge, and am intrigued in following it into Heroes of Cosplay; so yes, I would most definitely support/campaign for a second season of the Creature Shop Challenge.

Oh, and here's an interview with one of the finalists, Melissa Doss conducted by our own Ryan Dosier at the Muppet Mindset.

The final episode was awesome! The three finalists got teams of two previously eliminated contestants as assistants to create a full-bodied traveler type creature. They also had to incorporate a specific prop and added effects into the creature's story. When the build time was finished, the creations would be filmed entering a tavern set where they would sit down and tell their stories to each other.

Melissa's creature had a smoking pipe and a bottle containing the Elixir of Life which would grant you immortality for a hundred years... And then it informed the drinker of the monkey's paw twist, that if you drank from the elixir, you had to find someone else to give it too after a hundred years or it would start to absorb your own life force.

Ben's creature came in with what Melissa called a "fetus lantern", the most awesome thing she wishes she had never seen before. Basically, Ben's creature was the last of its species due to genetic tinkering. He had to give up his own genetic experiment, his son, and started to tear up at the end of the spiel.

Robert's creature can be described as a gypsy-ish elder who had to get rid of the ominously powerful crystal ball contained inside a custom-crafted chest. Though I liked this one for the potential Transylvanian connection, the story for the prop and effect weren't as strong as the others.

All in all it was a great episode and I sure hope there'll be a second season in the future.

I was surprised to see everyone back. I'm happy for Robert, but I would have liked Melissa to win. But she was runner-up. I guess that's good, right?
M

I wonder if any of the creatures built during this series (especially by the ones who didn't win) will be used in any upcoming productions. Can the company legally use any built by the puppet builders who didn't win and therefore didn't get hired?

I was hoping the woman would win. She was pretty.

It was so cool seeing Brian Henson's office (has it been seen in other episodes?), with all those Muppet busts and Palisades Toys on the shelves, and the posters for The Muppet Christmas Carol and Muppet Treasure Island.

It was a close race, any one of them could have won, but I'm very happy for Robert. I, too, was surprised that most of the other contestants came back to help. Ben and Melissa are very talented people, I hope they keep on doing what they love to do.

Bringing back formerly eliminated competitors to help out the finalists in these type of shows is actually quite common, it was done on Faceoff before Syfy gave the Creature Shop Challenge all afternoon/evening on their Tuesday schedule block.

I agree with the Mindset's overall review that if a second season is greenlit, I'd like to see Gigi given a similar role to Faceoff's hostess where she joins the various mentors at the Creature Shop during their one moment of giving advice. Also, the mentor day should be the Day 2 of the build so it's not so "last-minute" in terms of being available to lend assistance if needed.