When the Doozers set up a Doozertube at the farm of special musical guest Jason Mraz, he joins Gobo and Wembley for a jam session. 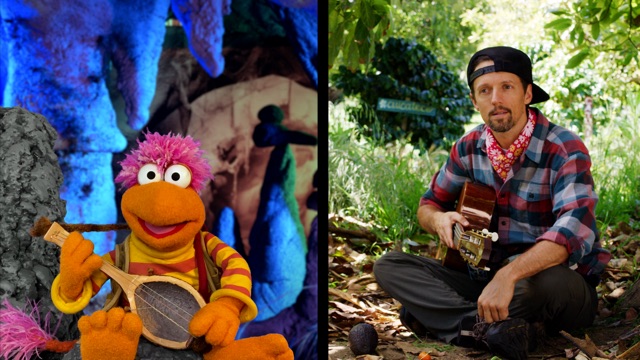 I get that these are 5 - 6 minute shorts so there isn't a lot they can do, but these seem a little too... simple. There seems to be no real purpose other than just entertainment as opposed to entertainment with a message. Like in this case, they talk a little about farms, but how about take the opportunity to show some footage of his farm and how he works it, exposing kids to things they probably haven't seen. They talk about Jason trying to decide what he wants for lunch which sends Wembley into a bit of a Wemble, but there are no consequences to his decision or lack of one. It was just an excuse to go into the song, which was nice, but I like my fraggles with some meaning.

Maybe I am being overly critical and comparing brand new shorts done over 30 years since the show last aired to the original that was spearheaded by Jim Henson himself. Maybe I should just be happy the characters are getting exposure and hope that this leads to a movie that does encompass the spirit of the original.

Edit: Also, I really miss Steve as Wembley. We have seen recasts before, but never seen an original character ripped from a performer without their consent. Even Kevin Clash voluntarily stepped down amidst his scandal and is still on good terms with the Jim Henson Company and Sesame Workshop. I wish Steve could work out whatever issue he has with the Jim Henson Company so he could at least perform Wembley.
Last edited: May 19, 2020

I'm really liking these new mini sessions. They're simple enough to just keep the memories alive. I thought the new voices were surprisingly close esp for Gobo...I too miss Steve for Wembley though. The new Wembley voice stays up at the high end it seems. I like them bringing back the old songs though. Whatever happened to the movie that was supposed to come out?

Man I really hope this is going to boost up the Fraggles popularity. Maybe the show could be brought back for Apple TV or HBO?
A