Heya, Dearth! Did you ever finish Sal?

So I'm not good at "scale sizing" but what scare are the action figures in? I was looking for a miniature upright piano to go along with the Rowlf figure

I never began sculpting a Sal. He's on my dream list if I ever get off my lazy butt and start finishing all those half-begun Muppet projects.

Thomasultimate said back in July he was thinking of making one. I wonder if he ever did?

The scale of the Muppet figures by Palisades is really tricky to judge. They don't actually correspond to the proportions of the real puppets or the backstage set. They did a fantastic job translating them into toys, but the times that I've tried to put a 'guest star' in the dioramas, whether it's a George Burns doll or a smaller Sylvester Stallone action figure, you discover what an odd size everything is with a normal human in the shot.

For my upright piano, I just found an antique dollhouse piano that looked good. When it arrived, it was a great height for Dr. Teeth but too low for Rowlf. I had a friend cut a wooden base to stand it on so I can adjust it for whichever one is playing it. If it's Teeth, it's okay by itself. If it's Rowlf, I add the spacer to raise the keys to the height of his hands.

Dearth, I'm sorry! I thought you started a Sal! My bad! Thanks for the info with the piano though!!! I'm starting to get the bug to set up all my figures again. I had to put them away due to lack of space, but I'm will to live in a cramped bedroom area cuz I miss the lil' guys! Thanks again! Oh! By the way, hit me up if you're into doing a commission for a Link and Strangepork! Thank you!

LamangoNumber2 said:
... you can get Servo from box set XVI from Shout Factory. He fits in perfectly. 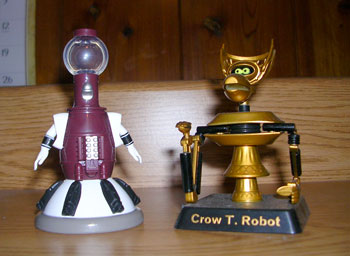 Now, I'm sure you can find a way, you handsome customizer you...

...if you redocorated the Pigs in Space Set...BOOM, Satellite of Love!
Click to expand...

Hey LamangoNumber2, remember when you suggested this YEARS ago? Way back in June of 2011?

Well, I liked that suggestion so much that I've been keeping an eye out for these ever since.

And I finally found a Tom Servo for a low Buy It Now price and snagged him off eBay a couple of weeks back. Got him for under $10 shipped, which was surprising.

Wish I could find Gypsy or Crow for that kind of price, too.

I LOVE your customs Dearth(Nadir). Keep up the good work. I love the extra frog scouts.
L

How do you make these customs. I know boiling water makes the plastic softer.

Well, the techniques really vary. I've given this sort of answer several times in the past, but to save you a search...

Some figures are simply repainted. I might paint only a small area, or I might repaint practically the entire figure. The paint might be applied by hand with a tiny brush, or it might be sprayed from a rattlecan, in which case there's usually lots of masking tape involved.

Other customizers use airbrushes for their paint applications. I have no experience with that.

Some figures are also re-sculpted. My usual material for that is Super Sculpey. If you put Sculpey onto a figure, that's a process called additive sculpting.

Sometimes I use a rotary tool called a dremel to take detail away from a figure. In real-life sculpture, this technique is known as subtractive sculpting, like when an artist sees a block of marble and 'frees' the statue he sees inside it. But when dealing with action figures, the subtractive only does so much. It's usually just an in-between step before also additive-sculpting new details over top of the subtracted areas.

Some figures, like the "Simon Smith" Scooter, are a combination of parts from multiple donor figures: head of Scooter, body of Lew Zealand, top hat from tux Kermit.

And some figures have totally new materials added to them, like the feathers I've added to some of my commission Piggy figures, etc.

And, some figures are entirely sculpted from scratch, like what Christian does. His have no action figure inside them, as mine do.

Yes, boiling makes some plastic softer. It also can warp and melt other plastic, so that technique has limited uses. Sometimes BOTH kinds of plastic are present on one figure, so the boiling technique can't be used.

In short, there are as many ways of doing the custom figures as there are ways of making puppets. Each artist brings their own skills and medium of choice to their projects. I encourage you to experiment and see where the journey of discovery leads you.

You may be the very first person to ever think of the BEST way of doing something, and then we'll all be asking you, "how did you do that?"

Dearth said:
Hey LamangoNumber2, remember when you suggested this YEARS ago? Way back in June of 2011?

Well, I liked that suggestion so much that I've been keeping an eye out for these ever since.

And I finally found a Tom Servo for a low Buy It Now price and snagged him off eBay a couple of weeks back. Got him for under $10 shipped, which was surprising.

Wish I could find Gypsy or Crow for that kind of price, too.

Oh sweet! My Servo figurine is sitting in the Swinetrek playset, taking over for Strangepork.
L