Another Stupid movie to Overreact to...

Hubert said:
But it works! That's just the thing...it doesn't look scary at all from a child's perspective, I absolutely know for a fact I would've bugged my parents to take me to see this when I was little...it's one thing if it doesn't appeal to kids, but it does. Kids like a colorful cast of characters having fun like that.

We do have higher standards of kid's programming. It can be and should be a bit better...but I'm saying that if it is what will entertain kids, then what's the problem?

I get what you're saying, but that's not the point I'm making.

You could fart in a sock, film it with seizure inducing color filters, add in cheap Casio Keyboard music, and call it children's entertainment. Children are easily entertained. BUT there's nothing wrong with challenging them and giving them something of quality. This is quantity. This is the cynical 1990's Barney knockoff revisited. Not even the ones they televised. The cheap home video ones they make to fool Grandma into buying a gift that gets buried in a closet.

Tossing together a crappy product and saying, "it's for kids, they'll like anything," is something children's TV producers that HATE children do. Kids aren't drooling morons, stop treating them as such. Give them the quality they deserve, well written scripts made for well designed characters that kids can happily grow up with.

Let me put it this way. You ever watch something you loved as a child when your older and you say "GAW! Why did I LIKE this crap!?!" Does that make an impact on you? Then do you watch something else and discover not only is it still great, but you have a better understanding and appreciation of it? I once bought a Teddy Ruxpin DVD at a dollar store and was afraid to watch it for months, fearing that it would be sugar coated nonsense and that would force me to rethink my childhood in a cynical light. I nervously watched it, and became a kid again, overly delighted in the show's solid adventure plot and fun characters. In truth, out of everything I liked as a kid, I only disassociate myself with the crummy girly shows I watched when I was really little and Captain Planet. I can still watch the Smurfs and be thoroughly entertained. That's what quality does.

Something good will be a part of you forever. That is what all children's TV producers/creators/entertainers/writers should strive for. I mean, how many people dump on today's programming and only want them to rerun Tiny Toons, Invader Zim, and Batman TAS for all eternity? Why does everyone of a certain age hate Elmo, but LOVE Sherlock Hemlock? Why does everyone fly off the handle on these non-stop CGI movies based on old cartoon shows? That's because those shows became a PART of them. They never grew out of them, they never grew to hate them for extended periods of time. That's the power of a quality TV show or movie.

How many people remember dime store knockoff Mac and Me over E.T.?

What this guy is doing isn't any of that. He wants to throw another throwaway kiddy toy empire out into an overcrowded marketplace in a lame attempt to make money. This will be quickly forgotten or remembered ironically (Teletubbies was popular ONLY because it was ironic and ONLY because they said one of them was gay... I defy anyone to tell me they actually liked it). There is something wrong with that because it's children's entertainment for all the wrong reasons. And this criticism is coming from someone who didn't hate the Smurf movie as much as he thought he would, and is actually happy it brought interest back into the characters.

What are we watching, FOX? There is no racism present here...
Click to expand...

Reread the article. it clearly states that the idea for making the film interactive came out of watching a specific audience of a Tyler Perry movie. it isn't a joke, it's not a gag... it's an ACTUAL QUOTE from the guy who wanted to make the movie. Not even created the characters... heck, the creator of the characters didn't want to make a movie.

I understand what you're saying, and I agree that children's entertainment should be better than this...I'm just saying that there is no reason to moan and groan and overreact to a thing that does serve its purpose.
D

Hubert said:
I understand what you're saying, and I agree that children's entertainment should be better than this...I'm just saying that there is no reason to moan and groan and overreact to a thing that does serve its purpose.
Click to expand...

I'm getting "You have no right to complain because I don't see the point in complaining."

Yes, why would Henson fans who shudder at the thought that he was branded as a children's entertainer for a high quality show, and hate the fact that his creations are dumped in the same pile as those cheap DTV religious puppet projects by some people who just don't understand get antsy over the lack of quality in the stuff they force kids in front of to shut them up so mommy can have another wine in her special cup?

Next thing you'll tell me is that Transformers fans have no right in hating Michael Bay for making terrible movies that took the spotlight of the franchise.

Drtooth said:
I'm getting "You have no right to complain because I don't see the point in complaining."
Click to expand...

I'm not saying that...I'm saying that since this serves exactly what it was supposed to do, why are we complaining about it? If it was tagged as the "Best Children's Movie of All Time," then that's something to complain about. But it's purpose is very obviously to be a fun little interactive kids movie, nothing more.

Hubert said:
It's there...it may not be the best executed movie in the world, but it's there. It will appeal to kids
Click to expand...

Yeah but just because something appeals to kids doesn't mean it should.

heralde said:
Yeah but just because something appeals to kids doesn't mean it should.

My point exactly. It's like feeding the dog leftover food you wouldn't want to eat yourself and saying "What does he care? The dog eats its own feces!"

Now I could "complain" about this, but we're actually making fun of how freaking awful, mechanical, and dated it looks. I do not see this appealing to kids unless a time warp somehow opens up and shoots this film back to 1992 or something.

Say what you will about CGI and modern kid's entertainment, but giant Barney style walkaround costumes with their own TV show is quite passe. And that's not such a bad thing. 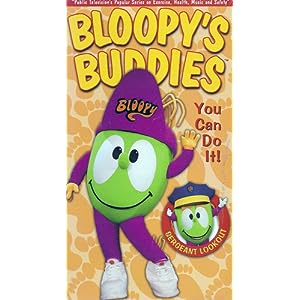 Wretchedpiece of FILTH! Ruin the comedic genius of Johnathan Winters, will you?!?!

But seriously. There IS no kid appeal... at least to the extent of wanting to have Mommy and Daddy pay 30 bucks to see it. The laughability here is that Mr. "I took the credit for Teletubbies" either was denied a show on one of dozens of children's preschool networks or actually thinks that a theatrical movie is the best way to launch the franchise. It's not going to get the audience he thinks it will because:

A) Mommy and Daddy buy the tickets, and can openly refuse to see something that's annoying to anyone over the age of 5 inclusive.

B) Like I continuously said, Preschool franchise films FLOP! Even big names like Elmo and Pooh. And I'm very disappointed about the box office Pooh did, but that's what happens when you have all these preschool shows and products with the characters on them... Pooh's forever branded as a baby franchise.

Which brings me to this. How come we have all this molly coddling when kids are 1-5 years old, and then we rush them out of their 6-12's to become teenagers? I'm glad we've seen a resurgence in super Hero cartoon shows and some other comedy shows that appeal to kids that young... but it seems the only money goes to kids under 5.

If we ever would meet in person, I'll just make sure I'm wearing my Oogieloves T-shirt...

Drtooth said:
Mr. "I took the credit for Teletubbies"
Click to expand...

Yeah not really something I'd personally brag about, lol.
D

If we ever would meet in person, I'll just make sure I'm wearing my Oogieloves T-shirt...

On the plus side, I'm sure it will be very cheap to procure one. Who'd want it?

I'm guessing that, in a year's time, you won't be able to go to a war torn impoverished country without finding everyone clad in Oogula merchandise. Sure beats Super Bowl losing teams.

Actually... no. I'd think they rather Super Bowl losing teams. More dignity that way, you know.

heralde said:
Yeah not really something I'd personally brag about, lol.
Click to expand...

Yeah... I don't know if it's a British cultural thing. I've seen some dreadful stuff come out of there, but also those cute little stop motion cartoons with alliterative titles... you know... Postman Pat, Bob the Builder, Fireman Sam (not alliterative, but sort of rhymes). Those are high quality (until Hit ruined them with CGI, that is).

Still, I just don't understand what Teletubbies was for. I mean, it's clearly geared for kids too young to have memory imprinting yet, so why go after the same demographic that's so easily entertained, they just need keys jingled in front of them, and their busy all day? It was only popular because of the accusations one of them was gay for one thing, and it was also popular with drug users (no kidding). So basically, it was popular ironically. And Boohbah. That was even worse. Glad that one never took off.

Actually, you know what. This Oogieboogie thing may just be worth an ironic, so bad it's good look.