The SuperFood Super Foods fly onto Sesame Street to help their friends try new foods, find a healthy snack, and explain the importance of eating breakfast. Also featuring Orange is the New Snack parody and Elmo the Musical-Tomato. Brought to you by the letter H and the number 10.

This street story is originally from Season 41, Episode 4230. 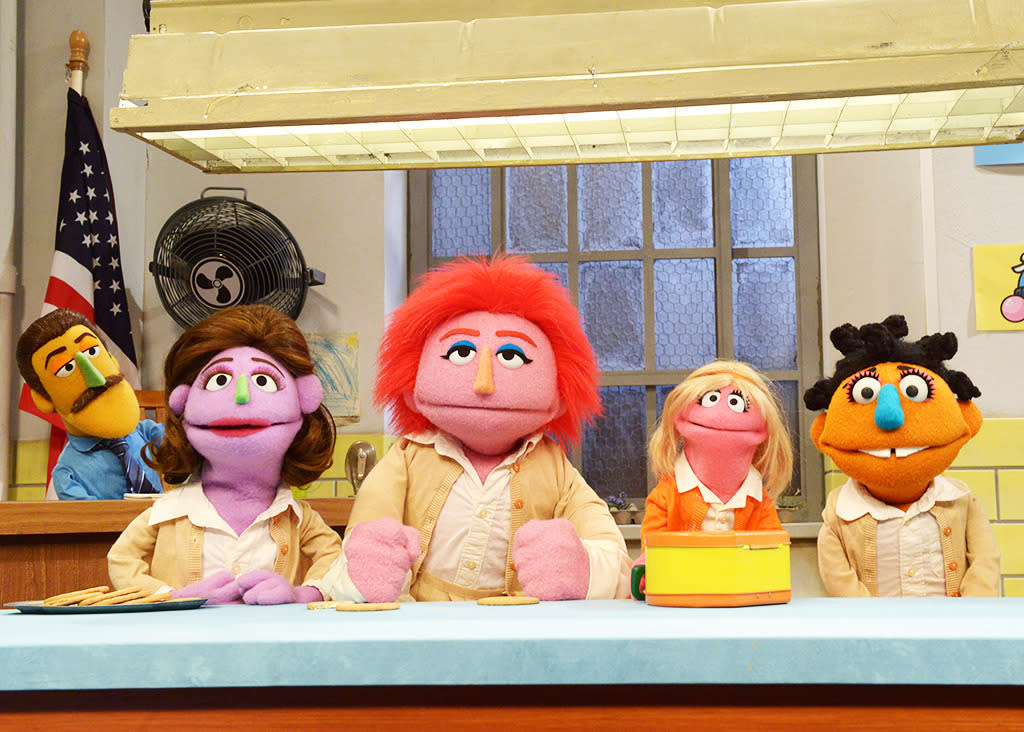 Orange is the New Black is a show I don't watch, so any little references to the show went over my head. But other than that, it was a fun little sketch. I'm going to have to ask someone who watches the show about this one, as I did about an episode of The Comedians. I'm liking Prairie's new performer, and liking that Prairie is still part of the show. Though I wonder if turning a prison into a school sends the wrong message. Eh, hopefully kids will be too young to notice.

4 episodes in, I can without a doubt say that what I hate about the shortened run time is that letters and numbers are tossed aside for beating the blunt end of the episode's thesis into kids' heads. The little film/animation (and I didn't care much for this one) has a slim tie in to the letter of the day, mentioning it briefly and then going onto another long form segment about the subject of the day without so much as a mention of what the letter is until the end, tacked on.

The number segment was completely omitted from the episode, only using the intro song. No wonder they don't end the show with "Today's episode is brought to you by" anymore. The letters and numbers are taking a backseat, why bother pointing them out?

It's odd that the "New Snack" had better pacing than any of the new street stories. I kinda wish they established like a "Starring Prairie Dawn as Piper" thing at the beginning, or just made her character named after her. They don't use Prairie often, so she's not as recognizable as Cookie or Grover would be if they threw them into a spoof.

Did anyone else notice Betty Lou and some international characters at the beginning of the OITNB sketch?
A

The sketch was pretty funny. I'm guessing Jen Barnhart was Red because, she ate the orange with her right hand. I don't know who played Googly Eyes.

Googly eyes freaks me out.

Thanks for sharing. The thing about repeat episodes before when it was on PBS is that I always had to sit through the whole episode to see if they squeeze in anything new. But now that the show is on HBO and I can only watch online, it's good to have these new segments on the web. Seems like Stephanie is really starting to shine as Prairie/Piper.

Orange is the New Black is a show I don't watch, so any little references to the show went over my head.
Click to expand...

At least you knew what show they were parodying. I haven't heard of it until now. But I understand. I didn't get a lot of those references either.
A