Tonight make plans to watch "The Muppets" one-hour season finale beginning at 8:00|7:00c on ABC. Then join the discussion immediately afterwards in the Muppet Central Forum.

In the first half of a combined Season 1 finale, Miss Piggy breaks her leg during a dance rehearsal, so Kermit and the crew broadcast her show from the hospital. 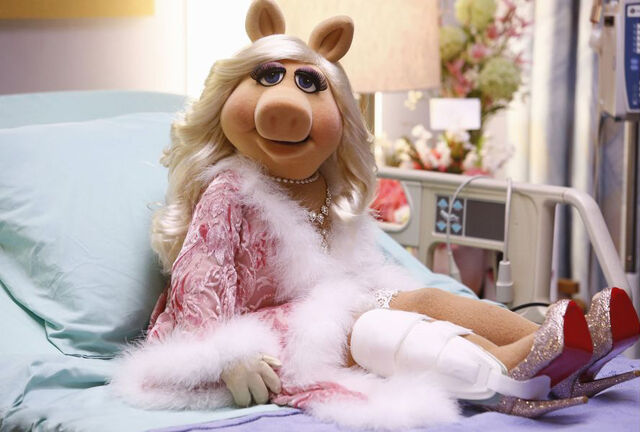 *faints in the aftermath of the epicness I just witnessed. Random penguins run over and throw icy cold water in my face*

*Spluttering* Whew! Okay! We certainly have some stuff to discuss don’t we?

I’ll start with what I’ve come to call the ‘supporting plot’. So, we have Pizza come to crash the show one last time. He wants to have a DJ come in and guest host, but Kermit leaves it to Pepe, Rizzo and Yolanda to stop the guru at all costs. What we get is Muppet comradery and mayhem worthy of TMS.

Big Mean Carl eats Pizza’s phone and they rush him into a dressing room to lock him up. Yolanda uses her great imitation to act as Pizza and we end up getting some great jokes out of it. I adored Sweetums’ approach to the situation. A nice little message of how just honestly talking to someone can solve a heap of problems. The Muppets get him talking to his father and we never see Pizza again. Good. He wasn’t important anyway!

Moving right along, during the show we have the spectacular mash-up of Muppet Labs and the Swedish Chef. It was a thrill to see Beaker doing what he does best once again and to hear Chef’s theme song! I’m not too familiar with Willie, but I am familiar with ‘On The Road Again’, so he was a heap of fun to watch with the Electric Mayhem.

WELL, things certainly got interesting didn’t they? We start off with a beautifully puppeteered ‘Single Ladies’ which leads to the most cringe-worthy sight I could have ever hoped NOT TO SEE! Piggy snaps her ankle and has to be convinced to go to the hospital by Kermit, who had been watching admiringly from afar, and Uncle Deadly.

There are so many things here that catch you off guard; for instance, Kermit cowering behind the couch only to realise Piggy wasn’t going to throw the tissue box. Piggy’s character development has been sensational and it makes me want to kiss the nearest Muppet writer. She will never go back to being the flanderized pig she was, Eric Jacobson won’t let her. I’m so froggin’ proud of Eric and the exceptional work he has done on this show!

Moving on, to quell Piggy’s fear of being replaced, Kermit brings the crew to the hospital to do the show from there, which almost turns over into a disaster when Piggy accidently injects herself with morphine. We end up getting yet another throwback with Rowlf coming in to do Veterinarian’s Hospital! My absolute favourite Muppet segment! It was short and sweet, but it made me laugh, so it was perfect in my eyes! As Kermit realizes, this could possibly be one of the best shows they have ever done! I personally would watch this if it happened to Jimmy Fallon or Stephen Colbert.

Once the show is over, we finally hit the climax of the episode as Piggy is about to go into surgery. The doctor asked her if she understands the danger of anaesthesia, she agrees then THIS MOMENT FRIGGIN’ HAPPENS!

Kermit: I love you too, Piggy!

HOLY MOTHER OF ALL THAT IS MUPPET GOD HENSON…….It finally happened! He said it! He actually said it!

There was no preamble. No one forced Kermit to say it. No one put him in a stranglehold. Kermit just said it straight and made my heart and mind explode! I mean, I was expecting it, but it still blew my mind hearing it! It’s weird that one sentence can equal about 25 years’ worth of character development! Jim’s Kermit never would have said that, but Steve’s Kermit has come close multiple times.

So just when you’re emotions are stirring in a frenzy, Kermit reaffirms to himself what he just said, not realizing that Piggy had said it under the influence of morphine. Not to mention that one of the cameras had been left running and every other Muppet saw it happen!

I can’t express how happy I was with this episode, but it only gets better with ‘Because….Love’!

I thought it was a great episode. It was so nice hearing Rowlf and Fozzie speak again and while it was short, Vet's Hospital was also adorable.
A

This episode was pretty good. I liked Piggy singing Single Ladies. It was wonderful to see Vet's Hospital. I love how they handled Deadly introducing it cause no can do Jerry's natural voice. I liked them combining Muppet Labs and the Swedish Chef and we got Dr. Teeth singing.

Loved every minute of both this episode, and "Because... Love." I mean it. I'd say more, but I just know that everything I say is pretty much exactly what everyone else will say. Which really makes this post pointless.

In all seriousness, these two episodes made a wonderful dual finale. I was particularly thrilled to see Sweetums being involved in the plot. Go, Sweetums!

I liked this episode, though with most of the episodes this year, it felt really rushed. Pache's plot-line sort of fizzled out, and while it was funny to see Sweetums sit in front of his door with a rope, I wish he had been written out with a storyline that felt more important. Not that I particularly wanted to see more of him, but his exit seemed like they forgot to write him out before the show ended and came up with this as the cameras rolled.

It was excellent to see Vet's Hospital back, and the poor woman in the bed made for a great foil for Rowlf and Janice. Seeing Rowlf in doctor's scrubs again was just perfect and I wish they had done this kind of thing earlier in the season.

charlietheowl said:
I liked this episode, though with most of the episodes this year, it felt really rushed. Pache's plot-line sort of fizzled out, and while it was funny to see Sweetums sit in front of his door with a rope, I wish he had been written out with a storyline that felt more important. Not that I particularly wanted to see more of him, but his exit seemed like they forgot to write him out before the show ended and came up with this as the cameras rolled.

It was excellent to see Vet's Hospital back, and the poor woman in the bed made for a great foil for Rowlf and Janice. Seeing Rowlf in doctor's scrubs again was just perfect and I wish they had done this kind of thing earlier in the season.
Click to expand...

Yeah. I liked that they brought back Vet's Hospital voice. Plus Deadly was a natural at imitating Jerry Nelson's original narration.

I was totally caught off guard that this was the season finale for the show and boy oh boy, what a great way to end an amazing season! When Piggy broke her leg, I was cracking up at how the other Muppets were looking away or passing out (poor Bobo). LOL As usual, lots of great one liners, perfect comic timing, but most importantly the heart that every Muppet production should have. The ending with Kermit & Piggy on the plane was too sweet (even if it ended in an unexpected way) I was glad to see my frog & pig (sort of) back together again! C'mon on ABC... don't leave us Muppet fans hanging! Let's hope they renew for season 2!!!

galagr said:
Can't wait to see all of the reviews that say that these two final episodes were "too sappy" and "overly sweet"