Your Thoughts: Muppets Most Wanted on Blu-ray and DVD

"Muppets Most Wanted", the Muppets eighth theatrical film will finally arrive on Blu-ray and DVD this Tuesday August 12.

Since most of us will be getting "Muppets Most Wanted", we'd like to mention that if you order the set from Amazon using this link, that you can save 43% off the regular price and a small portion of your entire order will go to Muppet Central to help keep the site, forum and radio running smoothly and help make future upgrades possible. It's a great way to help MC and get a great price on the Blu-ray or DVD. We greatly appreciate each person that helps support MC by placing orders through links on our site.

Once you receive your Muppets Most Wanted Blu-ray or DVD, post here and let us know your thoughts on this anticipated release. 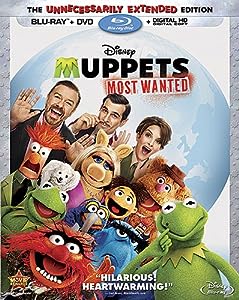 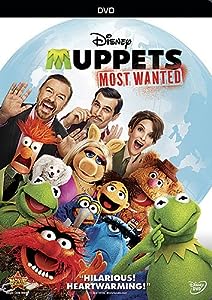 Just got mine in from the Disney Movie Club last night! Will watch the extended version here shortly!

Haven't purchased it yet, but I will come Friday. My mom gets paid on that day, so I'm going to wait until then to get it.

Ordered mine last night, along with Old School Volume 1 (only one missing on my shelf).

Going to get mine a 2pm. When I get the DVD I'll review it here.

I will be getting my copy in a few hours!

However, for the protection of myself and others, I'd advise the rest of you that have already received your copies to put spoilers on your posts/reviews. If Annie Sue gets a line, I'll want to find out for myself, dang it!

Well, right not, the movie is #1 on Amazon's Best Sellers for Kids and Families. Money for Muppets!

I have my copy and have watched the extended cut 2 times all the way through! The extra footage may not have much to do with the plot but extra muppety footage is always good! My favorite part of it is all the original songs are uncut!

Just got it! I can't wait to watch the extended cut!

Got the Blu Ray today. The extended cut is great and well worth the wait. As I have said before, and this really seals the deal, you CAN hear Lips sing during "We're Doing a Sequel". His voice REALLY stood out, even in theaters. Rowlf finally got his line in for that song. Weird dance number in the middle. All of the suggestions for plots on the soundtrack were featured (including Statler and Waldorf standing up, which looked odd for some reason). A joke during which Constantine was roaming the halls of the prison was "Why do we have an open all doors button?" which inevitably gets pressed. The train station scene was extended, and included a joke about Beau having his license. Bunsen had more inventions than the bomb attracting vest and the exploding cupcake, and had some reasoning behind them. As promised, Cockatoo in Malibu is the full version, and well worth it. Trying to think here, as I watched it almost 5 hours ago. Umm...skip ahead skip ahead...Interrogation song. The Swedish Chefs mystery translator is NOT PRESENT. They cut him out and replaced him with Beaker. Before Constantine is to go onstage (to which he refuses), Dominick takes him into a room in which they start arguing. This is pretty much how the conversation went.
"You have to go, number one." "I won't go. YOU go number two!" Back and forth back and forth, scooter walks up, overhears, and walks away. When "Kermit" proposes to piggy, off stage, Camilla asks Gonzo when they will get married. Gonzo responds, "Remember Camilla, when I become a millionaire...again". Fourth Wall joke in the Gulag is included. When Kermit and Fozzie are in the dressing room, someone steps on Fozzie, to which he replies, "Ouch! I mean, nothing!". Kermit and Fozzie being detained in the small car, Kermit regurgitates a bobby pin (gross) and Fozzie gets grossed out and throws it out. Kermit breifly runs into Dominick while carrying the flowers, so Kermit does his best Constantine impression. Wedding scene. After Usher's cameo, 4 Disney Stars simultaneously get a cameo (which may or may not be in the theatrical version. I can't remember) On the rooftop, after Dominick and Constantine get arrested, Dominick starts bragging about how he is now Number one, and starts singing "I'm Number One, You're Number Two". I think that's about it. I know I probably missed some stuff in between, but I think those were the MAJOR scenes.
You must log in or register to reply here.
Share:
Facebook Twitter Reddit Pinterest Tumblr WhatsApp Email Link
Top