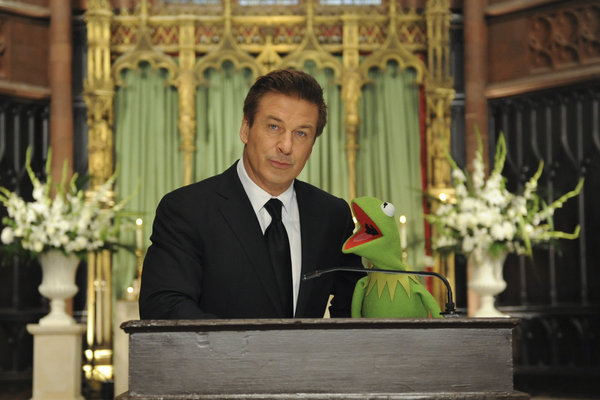 I just watched the appearance! I really liked it, I thought it was a nice little secret gift to see Kermit and I haven't watched 30 Rock in a looooong time so I had a little catching up to do, but I like this a lot and loved how Kermit stuck around close to the end and looked rather offended (like everyone there) when Jenna announced that she was getting married XD

I didn't get the joke with Kermit,..
"Thanks for explaining the afterlife to us Kermit."
Is there some inside joke that I missed?

Jack's mother comes to NYC for christmas and Jack agrees to do nothing for her. Once she gets a heart attack, he holds a funeral with a eulogy that is heartwarming, comedic and more. Kermit the Frog explains the afterlife. He is also seen in the pew.

Hazel broke up with Kenneth after Liz fired her and He wishes TV was real. He goes to Tracy for advice and meets Florence Henderson from the Brady Bunch and the three get stuck in an elevator. After they

Liz Lemon got married and won an award, and Jenna is mad because she stole her thunder for a surprise wedding. After she is invited to come with Liz to the awards ceremony, she creates a secret plan to hold her wedding at the ceremony. They get into a fight about Jenna's attention grabbing, and instead has her wedding at the funeral.

The episode ends with Kermit's signature "YAAAAAY!!!"
A

I expected more of Kermit, but his cameo was great.

More Kermit would have been nice....

Isnt is amazing how that little green frog can light up any scene no matter where he appears? Seeing Kermit on 30 Rock was simply awesome.

Muppet fan 123 said:
I didn't get the joke with Kermit,..
"Thanks for explaining the afterlife to us Kermit."
Is there some inside joke that I missed?
Click to expand...

Yeah. I didn't quite get that either, but still that was a nice appearance.

so basicly i didnt miss out on much?

muppetlover123 said:
so basicly i didnt miss out on much?
Click to expand...