Due to COVID19, comic cons have been moved to an online platform this year. Steve Whitmire will be doing a free to watch panel along with Emilio Delgado and Noel MacNeal.

You can register to watch the free panel here (although they upload it to YouTube after if you miss it). You can also pay $60 to have a two minute video chat with Steve. 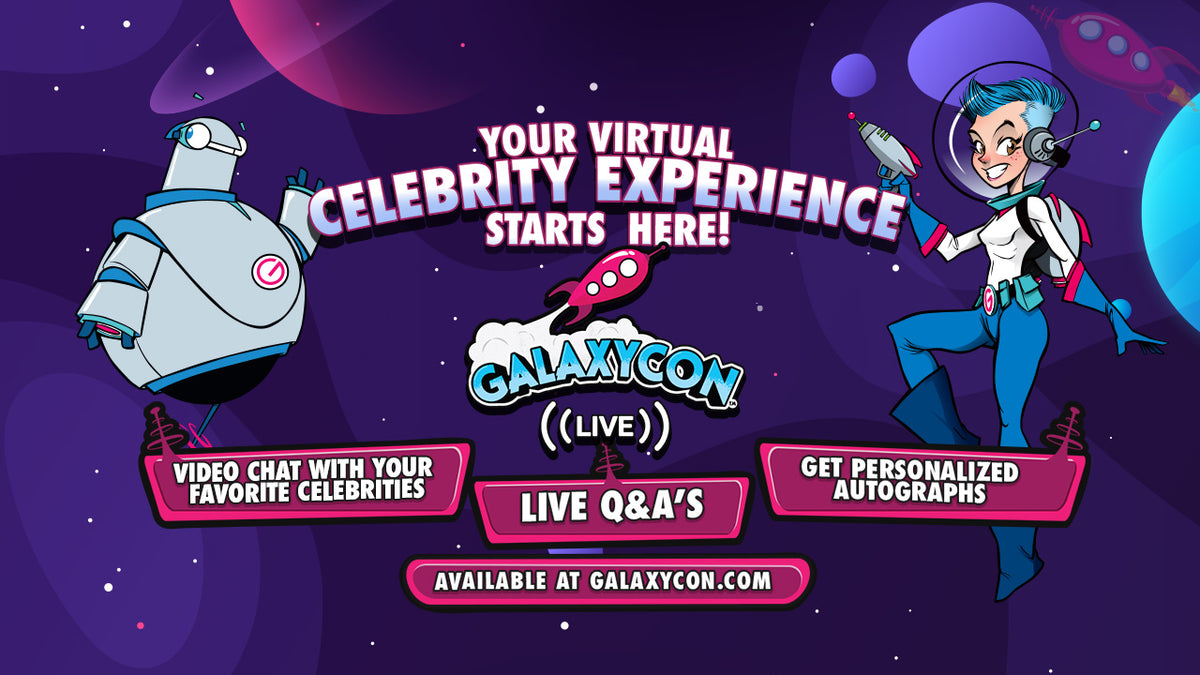 A good opportunity for those who can’t attend comic cons.

I watched the live video. It was great. Debbie Spinney also joined them for this.

I also purchased one-on-one chats with Emilio Degardo and Debbie Spinney, they were fun to talk to. Since I had already met Steve Whitmire twice and he cost a bit more than the others, I passed on him this time so I could talk with some other Sesame people (and allow others to have the chance... I don't really know if there were limits on how many chats they could sell), and since I'm not that big on Bear in the Big Blue House and he hasn't done many characters in the Muppet stuff I am bigger on, I didn't chat with Noel MacNeal.

I wonder if it will go to YouTube. I saw on the GalaxyCon site that some live Q&A’s go on YouTube while others don’t.

Some things I recall from the live stream:

*Steve talked about how he did the voice of Ernie toys for a number of years before he was officially cast as Ernie (anybody know of any talking Ernie toys made between 1990 and 1993?). I think he said they did consider one or two other performers for the role as well.
*Emillio DeGardo talked about being offered the role while on his last unemployment check. He said that he had not been aware of the show at that point. It is interesting to think there was a time after the show premiered when adults still might not have heard of the show.
*Emillio talked about being a regular on Lou Grant, traveling between LA and New York on a regular basis.
*I was thinking Noel MacNeil didn’t have any real Sesame Street characters, but the host reminded me that he has performed many Snuffleupagus relatives (actually, I only recall that he did Mommy Snuffleupagus).
*Debbie Spinney talked about how Caroll asked her out three times before she said yes, and it turned out he did not recognize her all three times, thinking they were different women.
*I kept forgetting that Debbie worked at Sesame Workshop when she met Caroll. She mentioned that when she was offered a job for Sesame Street, she was also offered a higher-paying job as manager of a bra company, but thought Sesame Street was the better choice. To think, if she had taken the other job, she probably wouldn’t have been participating in the live stream and video chats
*They talked about Snuffy “becoming real” and revealed that Caroll thought up a concept that was not used. He wanted to stretch out the meeting with the adults by having each adult, one by one, see Snuffy, only for the others to not believe them. I think that concept sounds sad (especially if it was a multi-episode thing, I can’t remember if they said).
M

Waiting for the video chats, I felt like Gordon in episode 2042, where he sets up all he needs while waiting to meet Mr. Snuffleupagus so he’d be sure to see him. I was making sure I had all with me so I wouldn’t miss the calls.

of course I logged in to both, with two windows open, and I got a call from the GalaxyCon people, telling me to just have one of the windows open, as it made it hard for them to get the video chats started.

I talked with Emillio DeGardo first. He asked what years I watched Sesame Street, and I told him there were periods when I would watch a lot and periods when I wouldn’t watch that often, citing some of those periods being 1984-1992, then 1993-1994, then 1997-1999, and said that there was a period when, even if I didn’t watch the show much, I’d make an effort to catch the first week of the new season.

he asked me about my favorite Sesame Street character, and I listed a number of them - Cookie Monster, Grover, Herry, Ernie, Biff and Sully, Kermit, Oscar, Slimey, and Bruno. He did talk a bit about those last two as I mentioned them.

I asked if he was absent from Christmas Eve on Sesame Street because of his role on Lou Grant, which he confirmed. There were also some things I tried asking about or bringing up but he seemed to think I was talking about something else, pointing out he was barely in Follow That Bird or Elmo in Grouchland, and also pointing out that, in the years before Luis and Maria were a couple, the two sometimes appeared as a couple in sketches like Hola and Sing Your Synonyms. I also mentioned I liked his reactions to Herry destroying the store in “I Can’t Help It”, and mentioned I remember seeing the Luis and Maria get married Episode when it aired. We also talked about the Ernie and Bert Sing-Along album.

With Debbie, we obviously talked about Caroll Spinney (I thought about asking what year they got married but forgot). I showed her my copy of The Wisdom of Big Bird (and mentioned I got it on the day it came out) and I am Big Bird. I mentioned that I like Oscar better than Big Bird, we talked about Bruno a bit, we also talked about Shivers the Penguin and Sam the Robot, and we talked about Caroll performing Picklepuss and Pop in Wow, You’re a Cartoonist. I also mentioned it was interesting how Caroll often said he didn’t make much money in the early years, yet was able to afford film to shoot home movie footage during the 1970s, I think I was stuttering a bit then so she had trouble hearing me on that.

When both chats started, they asked where I was calling from. I guess they did that with all guests. Maybe it is a common thing when notable people interact with people online. I know Frank Oz seems to also want to know where the people he’s talking to are from, he asked for that in his Reddit AMA chat, and during promotion of Muppet Guys Talking seemed to want to know that from people sending questions during live video chats.

I was excited, and the opportunities still ended up a lot more exciting.
M

Just found that the live stream is on YouTube now.

Very cool you did the 2-minute chats. I only paid for signed photos. 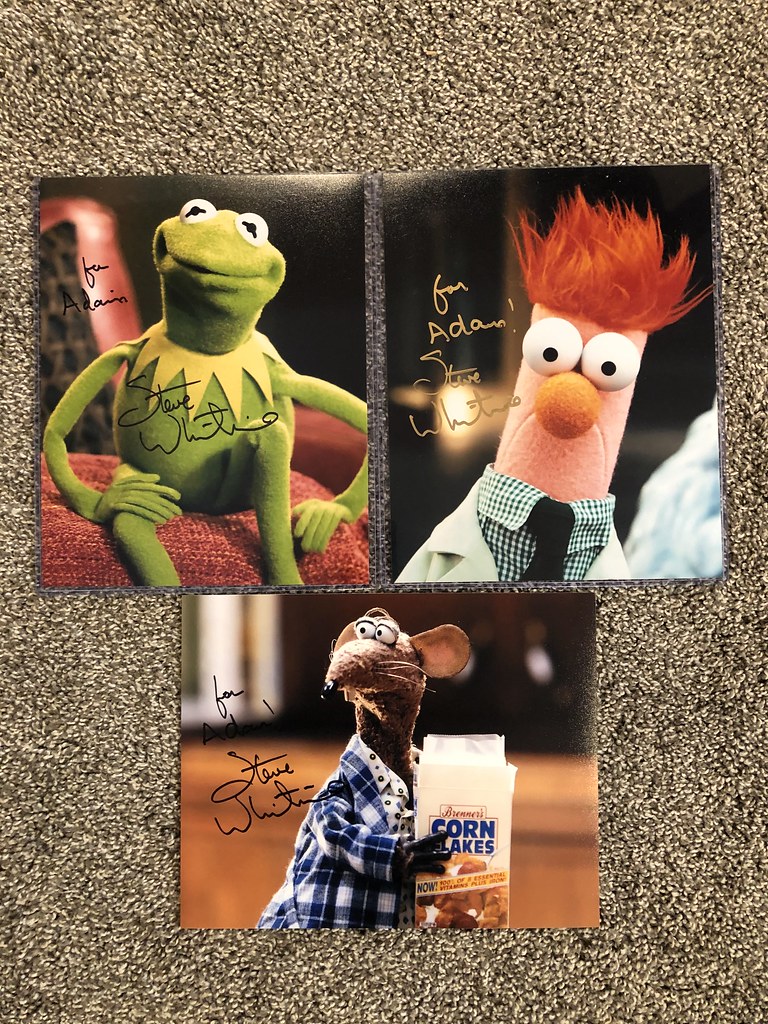 GalaxyCon will be doing another Sesame Street event on January 24. In addition to the return of Steve Whitmire, Noel McNeal, Emillio Delgardo, and Debra Spinney, there will be chats with Roscoe Orman, Allison Bartlett O'Reilly, and Alan Muraoka.