To help attract new customers to her bike shop, Nina and her friends must make musical instruments out of bike parts.

This episode features a street story from Season 47, I Wonder, What If, Let’s Try ("Riding a Tricycle"), Little Big Town sings "I is for Instruments", a new Cookie Monster's Foodie Truck ("Mozzarella Cheese") and Elmo's World ("Instruments"). 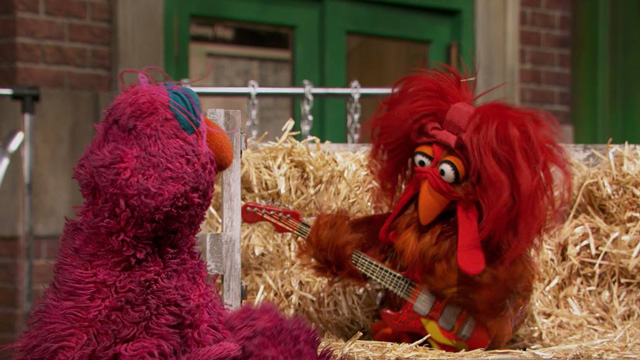 Disclaimer: I’m sorry I haven’t yet posted my review for episode 5118. I have not yet seen episode 5118, and did not watch the day it premiered because I was too busy looking up Kermit’s reveal on the Masked Singer from the night prior. I promise I will review episode 5118 eventually, but in the meantime, I’m gonna review today’s episode.

First of all, the Bike Shop Music Band is a very redundant title. Removing “Music” from the title would change nothing. But who knows? The redundant title might be instrumental to its success. Either that, or it’s the episode equivalent to everyone’s least favorite instrument, the bagpipes!
Wait, Scottish people exist.
Well then maybe the accordion.
Nah, might offend some Eastern Europeans (or even worse, Weird Al if he’s reading this for some reason).
I better just start the review.

The episode begins with Grover setting up the theme of musical instruments. A cheese (which is not an instrument) also walks by for some reason. Grover (for some reason) didn't know he was holding a trumpet the whole time, nor did he remember he never took trumpet lessons. This is A BIG LIPPED ALLIGATOR MOMENT (but more than that, it’s a really weird cold opening).

This episode’s Street story is a pretty simple one. Abby and Nina are celebrating the grand opening of the bike shop (even though the bike shop had been open for many episodes prior, even when this episode originally aired in season 47), when the two discover that they can make music with bike parts. They sing about it, and Telly comes by, wondering if he heard real music. Their fun gives Abby the idea to get music for the grand opening party, so Nina reserves Florence and the Egg Makers, an all chicken band. Telly explains how their instruments work, even mentioning their terminology (string, percussion, and wind). The chickens get a call to go cross a road, which they do. Without a real band, Abby gets another idea, this time to use their bike instruments. Nina makes a tissue box guitar (which Rosita plays when she comes by) and a water bottle maraca for extra effect. Their music attracts a customer, who wants 5 bicycles (one for each member of his family) and 5 of the fenders they were using to make music. More customers arrive as the street story closes.
This is a pretty forgettable Street story. Nothing really happened at all, and I was bored most of the way through. I hope the rest of the episode makes up for it.

After the same old bit of Elmo riding his tricycle, we get the Letter of the Day (and a pretty rare one at that), the letter I. We get a song by Little Big Town called “I is for Instruments”, even though the song itself never mentions the letter (which, to be fair, is a step up; it’s not afraid to show it’s not a real letter segment, unlike some others). The song itself is actually pretty good. I liked the part where Grover showed up as a one-man band (and crashed), and who knew Cookie Monster could play the saxophone.

Following some filler, we get Monster Foodies for the 4th episode in a row (not that I’m complaining). It starts with Cookie and Gonger receiving a call from a young guitarist, who wants a special kind of salad (which doesn’t require lettuce, contrary to Cookie’s belief). It does require tomatoes, mozzarella cheese, basil, olive oil, and balsamic vinegar. Cookie Monster gets out all of the ingredients, except the cheese, which he tries to cover up with a fake cough. Gonger sees through this and freaks out. The duo then head to the deli to get more mozzarella cheese, and I gotta admit, it’s nice to not see them go to a farm or a factory for once. The deli worker shows them how to make mozzarella cheese, gives some to the monsters, they make the salad, and the segment ends.

After that comes the number of the day which (thanks to the season 47 song) is 4. We get a cartoon about a quartet of cats playing their instruments and counting themselves in English and Spanish. I like this one, and I think this is the shortest wait between Number segments all season, only three episodes after the last one.

Next is Elmo’s World, where he’s thinking about (surprise surprise) musical instruments. Smartie arrives in a marching band uniform and shows Elmo an idea about all different kinds of instruments. Elmo then plays a game with the disembodied kid voices where they match up instruments to their sounds, and Mr. Noodle proves himself to be a great one-man band. Elmo does his happy dance and the segment ends (I’m getting tired of typing this every review).

Finally, Abby and Elmo recap the episode, with Abby showing that even the voice is an instrument by beatboxing (with Elmo rapping along).

All in all, this was a fine episode. I liked Little Big Town’s song about instruments, and Monster Foodies was pretty funny too. That said, the street story was boring, and the cold open was very strange. I’ll give this one a 6/10 and hope that next week’s episode (Potluck Pickle, with Steph and Ayesha Curry) is good.
Last edited: Mar 18, 2021
A