Rosita helps Abby and Zoe think outside the box to imagine the best fairytale ever.

This episode features a street story from Season 44, I Wonder, What If, Let’s Try ("Riding a Tricycle"), a new Cookie Monster's Foodie Truck ("Peas") and Elmo the Musical ("Prince Elmo the Musical"). 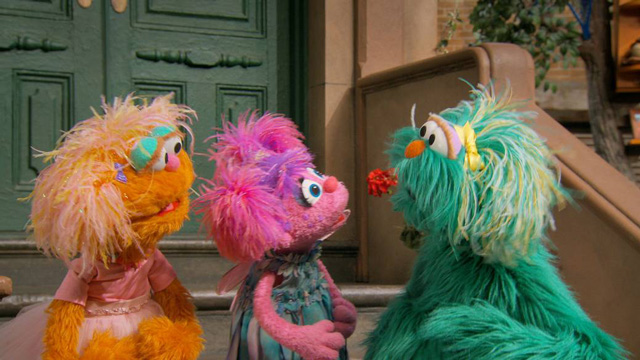 Alright, really short review today. Honestly, the minute I saw the title “Abby, Rosita, and Zoe Make a Story”, not only did I think that’s the must uncreative title ever, but I realized a majority of this episode’s content would come from something I’ve already reviewed:

So, the Princess Story. I don't have much to say for setup, so is this episode young and sweet, or nothing but charmless? Let's find out. The episode starts with an amusing cold open featuring Grover, dressed as a prince, setting up the theme of princes and princesses by attempting to find a...

muppetcentral.com
Let’s just get things started on the most sensational, inspirational, celebrational, Muppetational review show on the Internet.

The episode starts with (shock of all shocks) the cold open from the original remake (not an oxymoron, BTW) I’ve already reviewed!

This is followed with the street story I’ve already reviewed! Like I’ve said, this is gonna be a short review.

After some filler, we get the Letter of the Day, P, and a segment that (you guessed it) I already reviewed in the original review! Followed by more filler. This is getting kinda tiring.

Luckily, the next segment is all-new. Hallelujah! Even better, it’s a new installment of Monster Foodies! Let’s get it started.

The segment starts with Cookie and Gonger receiving a video call from Princess Polly. Not a kid named Polly pretending to be a princess, but an actual Muppet princess. She needs them to make her pea soup, because she ran out of peas. Cookie quips this line:

: Have you checked under you mattress?
And then the duo get cooking. Cookie brings out scallions, olive oil, chicken broth, and two letter Ps. The latter infuriates Gonger, as they needed the “vegetable” (fun fact: peas are actually a fruit), not the letter. They go off to get more peas, and a pea farmer tells them how peas are grown. She gives them their peas, and they head back to Sesame Street to cook them. They cook the peas, send them off to Princess Polly, and Gonger gives a spoonful of soup to Cookie. I really like this bit. Maybe not as much as Star S’Mores in the original review, but that’s a really high bar to get over.

The next thing in the episode is the number of the day. Today’s number is 7, and we get nothing.

After, well, nothing, we get Elmo the Musical. I actually ignored that in my original review for the purpose of reviewing it here:

Also, is this the first time this season in which ETM was shown in it's entirety? It was missing about 30 seconds, but yeah. I was surprised to see it shown so long. I did really like the street story; the sets, the puppets, it all looked very nice.

The episode ends with a closing scene featuring the girls recapping what they did in the street story I never reviewed here.

All in all, I feel confident in giving this episode an 8/10, just like the original. It kept almost everything I found entertaining about it, and when it changed something, it was replaced with something else that was entertaining. Thanks for reading, and I’ll see you in the next review.

I know this is gonna sound weird but whenever I see an old street story with Oscar's trash can in it's old location, I think "Why did they have to move it? This is how it should be."
A

I really liked seeing a Muppet order something from the Foodie Truck, I hope we see more of that. Who performed the king in that bit? I find it really interesting that they put Zoe in her tutu and Abby in her old dress in the ending bit for continuity's sake.

antsamthompson9 said:
I find it really interesting that they put Zoe in her tutu and Abby in her old dress in the ending bit for continuity's sake.
Click to expand...

Yeah, I noticed that this time.

antsamthompson9 said:
I really liked seeing a Muppet order something from the Foodie Truck, I hope we see more of that.
Click to expand...

It’s happened before. The Amazing Mumford was in one a few years ago.