When Elmo's, Rosita's, and Bert's toys get stuck in different places, Charlie and Super Grover wonder what tool might help them reach all their friends' things. What if they use a baton? Let's try. 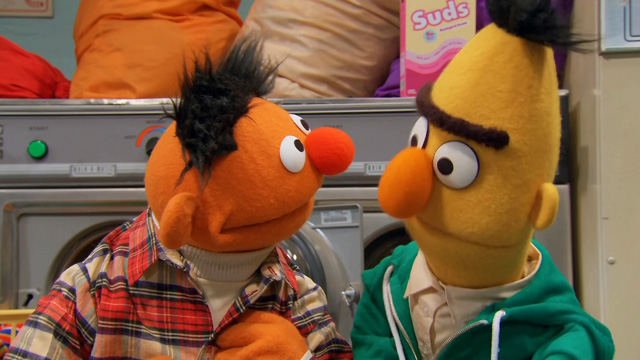 I didn't actively dislike this one for once this season. Maybe because it focused on funny characters and not just Elmo and Abby. Good to finally see Ernie and Bert for once, and Biff and Sully!

"It's about time we did some laundry, Bert." - Ernie

"I know what you mean. I feel like we've been wearing the same shirts for 50 years." - Bert

So, The Cool Tool Kid. This is the first original street story I’ve reviewed in a while, as well as the first new theme an episode had since I’d say episode 5107. Even other members on this website are saying it’s not as bad as the rest of the season. Do I agree? Let’s find out.

The cold open features Elmo and Biff (Yes, that Biff) setting up the theme of tools, with Biff looking through his toolbox for a specific tool. Eventually, Sully (Yes, that Sully) brings him the one he was looking for, a toothbrush (he wanted to brush his teeth after lunch). It’s really nice to see characters outside the main 6/7 appear in the cold open, especially ones that rarely appear.

The street story begins with Elmo playing with his plane, when it gets stuck in a tree. Super Grover then arrives, willing to help him.

Seriously, though, I love the joke about Chris using a fan to create wind for Super Grover, and then asking if he can turn it around because it’s getting hot in the store. I love parodies of the Dramatic Wind trope, so this was a delight. Anyway, Charlie came with Elmo to the tree after the plane got stuck. Since she was twirling a baton prior, she decided to use it to knock the plane out. It works, and Grover attempts to help immediately after, unaware the problem was solved. Just then, Abby and Rosita cry for help. Their ball got stuck under the stairs, and they can’t reach it. Super Grover tries (and fails) to get it himself, and while Charlie’s baton reached the ball, it couldn’t grab it. They decide to stick Abby’s garden tape to the end of it to get the ball stuck to the baton, which works. Meanwhile at the laundromat, Bert and Ernie are washing their clothes, which they claimed to have been wearing the last 50 years (a touch so nice even the MC Twitter tweeted it). Ernie finds a bottlecap in the laundry, which turns out to be Bert’s prize possession. Apparently, it’s the world rarest bottlecap, with only one in existence. Ernie then accidentally launches it, and it lands under a dryer. Super Grover comes to save the day, but finds he can’t reach it. He calls Charlie for help, but when she uses her baton, it only pushes it back further. They get the idea to attach the fabric softener scoop to the baton to scoop the bottlecap, which works. Super Grover dubs Charlie “The Cool Tool Kid”, and they go off to save more stuff.
This whole episode was pretty fun. It was interesting to see how they’d modify the baton to solve the problems, it had some great moments in it, and even some character variety. I wish the whole season could be this good, especially since I haven’t reviewed a “great” episode in a while.

After some filler, it’s time for the Letter of the Day (aka More Filler). Today’s letter is T, and the “letter” segment in today’s episode doesn’t even relate to the “tool” theme all that much. There’s a whole thing about how it takes precision to become a woodcarver, and the segment even went out of its way to teach the kids how to say “hello” in Maori (important skill, but really out of place in a segment called “T is for Tools”). Surprisingly, I had a lot to say about this segment and it’s confusing nature, so let’s move on.

After even more filler, it’s time for Abby’s Amazing Adventures. The segment starts with Rudy making a rollercoaster out of cardboard. Basket then arrives, and takes them to build a real rollercoaster. They’re given a few ride elements and need to decide which order to put them in. Through trial and error and forgetting that chains exist, they decide to put a big hill, then a small hill, then a vertical loop for a big finish. They build the coaster, test it out, and go home. Honestly, I’m kinda shocked I had less to say about this than the LOTD.

And now for something I have even less to say about, the number of the day! Today’s number is 5, and we get nothing. Honestly, I saw this coming, now just because of the General lack of number segments this season, but also because I knew exactly how they’d end this episode the minute it started…

The segment starts with Elmo imagining he’s a Repair Monster in a Park, looking for repairs. He asks a magician is he needs any repairs, which he declines. Suddenly, a nearby pogo sticker crashes, with his stick breaking in half. Elmo sings a short song while fixing it, and problem solved… or so it seems. It turns out the magician (named the Great Halfini) accidentally broke the pogo stick, among other things, while trying to magically cut a hot dog (still a better twist villain than most 2010s Disney movies had). He sings about his problem while breaking even more stuff, and Elmo soon finds that his wand is broken in half. He finds the other half stuffed in Halfini’s sleeve, and fixes it. They repair the park, and the segment ends.

Finally, Elmo and Super Grover recap the episode, with the latter taking credit for everything Charlie did. He tries to pass credit to the baton, but it still feels kinda cheap. I never thought I’d have to quote something so terrible in a review, but this quote is unfortunately too perfect:
“You know, women are always coming up with stuff, that men are taking credit for.”
See that Sesame Street, you just made the Emoji Movie right about something.

Seriously though, this episode was pretty good. I loved seeing Bert and Ernie and Biff and Sully again. There were great moments throughout, and I think that even the bad stuff helped make this my funniest review yet. This episode gets an 8/10. See you guys next time.
Last edited: Feb 18, 2021
A

This episode should be shown to the nay-sayers who say Sesame hasn't been funny since Jim passed away. There were lots of great funny moments, Grover using a fan to blow his cape, "What's the problem? Charlie, I'll handle this. What's the problem?" And "It's about time we did some laundry, Bert. I know what you mean. I feel like we've been wearing the same shirts for 50 years."
You must log in or register to reply here.
Share:
Facebook Twitter Reddit Pinterest Tumblr WhatsApp Email Link
Top