The Count leaves his booth in the hands of an excited Elmo and Abby, who learn how to count in different ways. 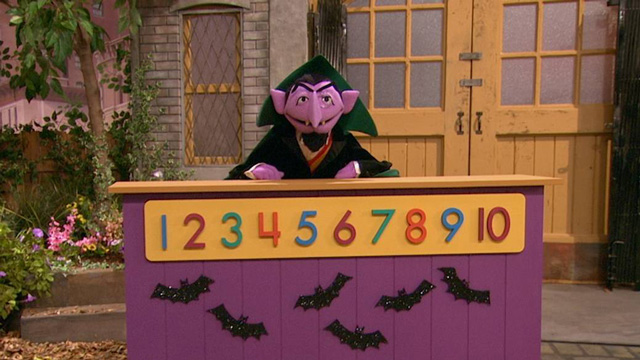 Greetings. And velcome to CoolGuy Rewiews. Today’s episode is The Counting Booth Counters, vere Abby and Elmo learn about skip counting vile vatching the Count’s counting booth (OK, this “vampire talk” schtick has gone on long enough. I’m typing regularly for the rest of the review.) Anyway, is this episode a 10/10, or a 0/10? Let’s find out…

The episode starts with a cold open featuring the Count setting up the theme of counting by counting some hats as they come by. Admittedly, it’s awkward hearing Matt’s Count in the cold open followed by Jerry’s Count in the street story, but whatever.

Speaking of the street story, it begins with the Count receiving a call about a counting emergency. He wants to tend to it, but has no one to watch his counting booth. He sees Abby and Elmo, and asks them to watch the booth, which they agree to do. He even gives them their own capes to wear before he leaves. Once he leaves, the two get their first client, Old MacDonald. He wants them to count his chickens, but when they start counting, he halts them and asks them to count the chickens by twos. The kids have no idea what that means, but luckily Maria is scrapbooking nearby and takes a break to explain that it’s just counting in groups of two. They count the 8 chickens by twos, and MacDonald leaves satisfied. Then Baby Bear arrives, having received a bunch of crayons from his grandma and wanting them counted. Since the crayons came in boxes of 5, Maria suggests the kids count them by fives. She explains how this works, and they count the 30 crayons by fives. Baby Bear leaves to draw with his 30 crayons, when Big Bird And Snuffy arrive. They want the kids to count the Birdketeers’ fingers. As you’d expect, Maria teaches Elmo and Abby to count by tens (as each Birdketeer obviously has 10 fingers), for a grand total of 80 fingers. The Birdketeers leave to go finger paint, and the Count returns, proud to hear of the kids’ accomplishments. Overall, this Street story is repetitive with the formula of a client coming, needing something counted by twos/fives/tens. Maria teaches them how to do so, rinse and repeat. I will admit, however, it’s a nice introduction for the audience to skip counting and multiplication.

Following the pointless segment where Elmo briefly rides his tricycle, it’s time for the Letter of the Day. This is good, because now I get to talk about the season 47 LOTD and NOTD songs. For the LOTD, this is probably my least favorite. It just feels like a remix of the season 45 LOTD song with the notes in a random order and sung by Abby instead of Elmo. Luckily, any of the LOTD songs would get the point across that the letter of the day is C. We get a cute but confusing cartoon about counting carrots (more on this later), followed by that godforsaken Hailee Steinfeld song (credit where credit is due, though, at least they waited 10 episodes between this and the last airing).

After that is Abby’s Amazing Adventures. This segment starts with Abby and Rudy pretending to ride horses around their room, when Basket comes in, flying backwards. She takes them off to go be sheep ranchers, where they ride horses and look for sheep. There need to be 6 sheep in a pen, but there were only 4 when they got there. They find one more hiding amongst some cows, and the last one blending into a mural of some clouds. Sorry if this was a shorter review of AAA than usual, but this is kinda repetitive too.

Next is the Season 47 NOTD song, which is probably my favorite of the NOTD songs, even if there’s no mention of the number of cookies baking for Cookie Monster being the NOTD (I pointed this out before). Oops, I spoiled the synopsis. Better fix that. This segment features Cookie Monster and friends dancing while waiting for cookies to bake. Once they’re done baking, the Count comes in and counts the cookies (though in earlier airings, the Counting was omitted). This is a repeat of one of the earlier airings, and so not only do we not get a number segment, we don’t even get the count counting the cookies. Kinda sacreligious for an episode all about counting. And while the real NOTD is 13, I found a solution that involves changing it (though oddly enough not removing the Hailee song).

The aforementioned “cute but confusing cartoon about counting carrots” is actually a “letter” segment, but if you remove the mentions of the letter at the beginning and end, it’s practically a number segment. Just move the segment to after the NOTD, change the NOTD to 8 (that’s how many carrots were in the segment), and problem solved.

But unfortunately, that’s not what we get. Instead, we get Elmo’s World. Today, Elmo is thinking about counting, and counts the clouds on his wall. Smartie shows him a video about all the things one can count, he plays a game with the disembodied kid voices about counting hats for penguins, and helps Mr. Noodle’s dog count his toys (kind of). [You already know what sentence goes here.]

Finally, we cut back to Abby and Elmo, who are counting penguins by twos. They count 6 altogether, and the episode ends.

. See you next time.

I found it surprising that for continuity sake, they had Abby wear her old dress at the end.