The Super Food Superheroes help Elmo and his friends try new healthy and colorful snacks. Together, they discover the importance of breakfast and how it provides the energy they need for the day.

This episode features a street story from Season 42, I Wonder, What If, Let’s Try ("Riding a Tricycle"), Cookie Monster's Foodie Truck ("Tacos") and Elmo's World ("Fruit"). 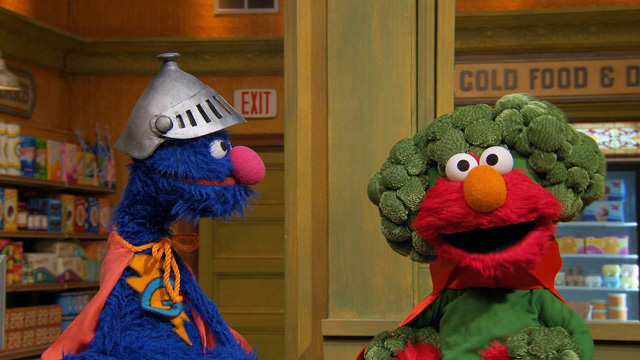 Alright. Easy review today. This might be the easiest review I’ve done thus far. Because the minute I saw the title “Elmo and the Healthy Heroes”, I knew exactly what this episode would be. Another remake of the Super Foods street story. I didn’t even watch the first half of the episode since I’ve already reviewed it. I’m not even gonna think of a comparison, so let’s just begin already.

Street story: Reviewed it. You can read my review of this episode (an the cold open) on the thread for episode #4604, but I’m not very proud of it.

Now onto the new stuff (or at least what I haven’t reviewed yet). Starting with the letter of the day, which is F, which they claim is for food. But to me, it’s for FILLER. To start, we get a repeat of Elmo riding his tricycle between the street story and LOTD, followed by a pointless “letter” segment, followed by a repeat of Elmo and Big Bird setting up Monster Foodies.


Anyway, speaking of Monster Foodies, Cookie Monster and Gonger get a call from a boy named A. A. Ron, who wants them to make tacos. Surprisingly, they already have all the fixings, until the funniest scene in Monster Foodies happens. For context, Cookie looks at the taco shells, hungrily. Gonger tells him not to eat them. Cookie makes him repeat the “eat the taco shells” part of his sentence, and he eats the taco shells. Gonger’s reaction is priceless.

Back to the segment, Cookie suggests they make more shells, but Gonger mentions they don’t have any corn. Cookie is shocked to hear this, and the two go to a factory to see how corn is made into tortillas. After getting some more from the factory, they make the tacos, and Gonger gives Cookie a spare shell. Cookie shares it with his friend, A. A. Ron thanks them for their service, and the segment ends.

Next is the number of the day. Today’s number is 9, and because this episode went on too long, there’s no number segment.

Alright, time for Elmo’s World. Today, Elmo’s thinking about fruit. Smartie gives Elmo some Annoying Orange-style fruit puns, and of course shows him a video about fruit. Elmo and the disembodied kid voices play a game where they must add fruit to a fruit salad, and Mr. Noodle’s brother Mr. Noodle tries to peel a banana (once he succeeds, he of course slips on the peel). This is probably the most time I’ve spent talking about EW in a while.

In the closing scene, Elmo tells Super Grover that he joined the Super Foods as the new broccoli, since unlike Elmo, the broccoli was never recast after Kevin left (press the letter of the day to pay respects to the original broccoli).

So that was Elmo and the Healthy Heroes, even though I barely mentioned either of them. This was an enjoyable enough episode (that’s a lot of E words). I’d say a 7/10, the same score I gave the original remake. Can’t wait until next week’s surprise episode.

Has SS done anything like this before? Where they repeat the same street story in two separate seasons?

D'Snowth said:
Has SS done anything like this before? Where they repeat the same street story in two separate seasons?
Click to expand...