Elmo and Rosita are stuck in a long line at Hooper's and are wondering what they can do to feel less frustrated. What if they make up a game while they wait for their turn? Let's try. 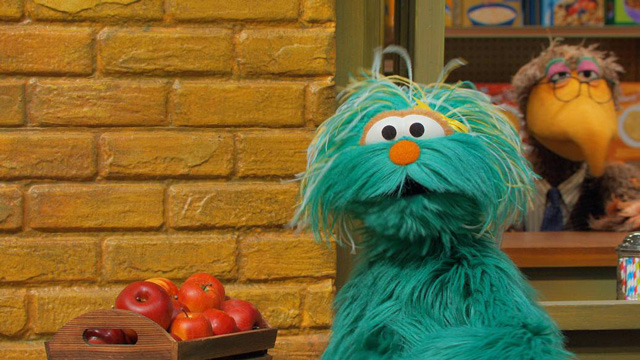 I think I'm getting like Shane - I keep forgetting about Thursdays now being new SS days.

Warning: This review contains spoilers for something actually worth watching. Read at your own risk.

The Waiting Game. I really didn’t know what to expect from this episode, so it is fun, or will I have to keep waiting for another good episode. Let’s find out.

The episode starts with an actually pretty amusing cold open where Elmo sets up the theme of games. Oscar overhears him, and lists his favorite Grouch games. Really the only problem I have with it is that the new Oscar puppet looks horrible, and unfortunately they use it here.

The street story begins with Elmo going to Hooper’s for a snack, but Chris can’t serve him due to the long line (where Bert, Chip or Dip, Gladys the Cow, and Leo Birdelli are also waiting). Rosita happens to be directly in front of him, and she suggests they play a game while they wait. The game even comes complete with a rock song, which is sadly pretty forgettable (I actually used to know the words, but then I forgot them. Shame too, since I remember enjoying the song.) To play the game, the monsters look around the store for something red. They find a red box and red cups before Chris serves Gladys. After this, they move the game outside for some reason. Rosita then adds a rule where once the red thing is found, the finder must shout “Rojo!” (red in Spanish). They play like this until they eventually find Grover. Grover also places an order, which he must wait for as well. He decides to join them in the game, and the song plays again. He adds a rule where once a red thing is found, they must touch the front door of Hooper’s. He dashed through the store to do this, while Rosita and Elmo simply go around the building. They play the game some more until Chris says Rosita’s order is ready. She declines, as she’s having too much fun, and says Elmo should get his order first. Elmo does the same thing, as does Grover (never mind that they can just continue playing once their food is done, but I digress). Chris now need to wait for more customers, and joins them in the game, with the song playing one more time. Overall, this was an okay street story. It actually had some moments I liked (as opposed to the last few episodes), and while they were balanced out by things I disliked or was confused by, it’s certainly better than the last few episodes.

Anyway, following that, we get 3 and a half minutes of pointless filler, with the LOTD thrown into it for good measure. Today’s letter is G, and we get yet another “letter” segment as some of the pointless filler. It doesn’t end until Elmo finally sets up a visit from the Foodie Truck.

Today’s installment of Monster Foodies is a bit different from the other ones, and you’re about to see why. Instead of starting with Cookie Monster and Gonger getting a video order from someone, it starts with them excited about the big game. Soon, they find someone’s at their door. It’s none other than actress, comedian, and writer Ellie Kemper! Kemper suggests they make zucchini nachos, and even brought her own zucchini to use. Gonger goes over the recipe, which also includes cheese, tomatoes, olives, and jalapeños. Cookie finds the vegetables easily, but Ellie eats the cheese while also wearing it as a hat. Gonger gets some more cheese out, and they start cooking. There’s a funny scene where Cookie eats a jalapeño slice, which causes his eyes to turn red, and he starts breathing smoke. Following this, Ellie suggests they only put jalapeños on half of them. Once they’re done, they try them out, and we get a little twist where it turns out the “big game” was not them watching a sports game, but rather them playing a board game. This is unsurprisingly my favorite part of the episode. Everything about this segment changes up the usual Foodie Truck formula, and I love it. Ellie Kemper did a great job too.

Following that is the number of the day. For the second time this season, it’s 10. Unlike the first time though, here, were treated to nothing. Oh well.

In Elmo’s World, Elmo is thinking about games, and imagines Rosita and Telly playing Go Fish. Smartie then shows Elmo a game that appears to be a combination of Candy Crush and Tetris, as well as the usual video about the topic. Elmo then plays a card game where they must match two cards. Then, Ms. Noodle tries playing a game with Schmoodle. She plays tug-of-war, but Schmoodle disappears. She whistles for him, and it turns out he was playing hide and seek. Elmo does his happy dance to end the segment.

Finally, the monsters recap the episode, and a reprise of the game’s song is played.

Overall, this was an OK episode. I liked some stuff in it. Certainly an improvement over the previous episodes. I’d give it a 6/10. And following this, I’m back to not knowing what the next episode is. See you next time, whatever it may be.
Last edited: Jan 28, 2021
A

I really liked the AM guitarist played by Stephanie that kept popping out of nowhere.

Oh yeah, I’ve noticed that in the last few episodes, but never pointed it out.

Forgive me if I wasn't online for a while, but I took a break because I was freaking out. Anyway, this is a pretty good episode.

TimzUneeverse said:
I took a break because I was freaking out.
Click to expand...

Maybe I got frustrated over a scene from the movie, Oliver & Company?