Elmo, Abby, Grover, and Nina want to make an obstacle course on Sesame Street but are wondering what they can use to go over, under, around, and through. What if they look for objects around Sesame Street? Let's try. 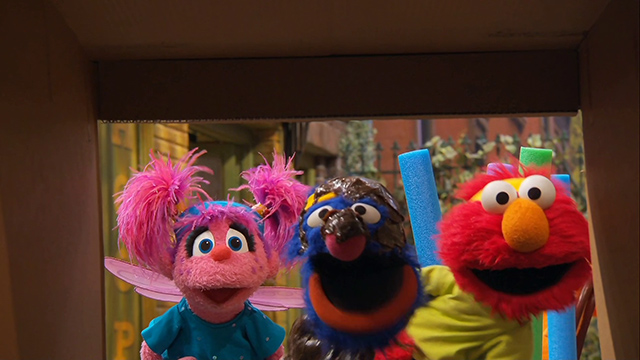 So, Tough Monster Race. I was a little confused about the title, and why the monsters (and Abby; why is she here again?) competing in the race weren’t conventionally “tough”. I didn’t realize until today that the race was the tough part, not the monsters. Also, I had a hard time figuring out what the theme would be. But now that I know that it’s all about opposites, will this episode be good or bad? Let’s find out.

The episode starts with a recreation of Grover’s famous “Near and Far” routine, with Elmo commenting over it to set up the episode’s theme. I’m sure older fans will appreciate the reference, as I know I did.

The street story begins with Nina showing Abby and Elmo pictures of her competing in an obstacle course, where she had to go over, under, around, and through various obstacles (and got very muddy in the process). This inspires the kids to make their own obstacle course. Grover then comes by, claiming to be an obstacle course expert (and of course, we all know that means he knows nothing at all about them). They get to work setting up the course. Through very tiresome repetition of the old “I Wonder. What If? Let’s Try!” phrase, they use a broom on laundry baskets to go over, a blanket on chairs to go under, some pool noodles stuck to plungers to go around, and a box to go through. With their obstacles set up, they race through them (complete with a cameo from Guy Smiley commentating, that was nice). They succeed, and the street story ends.

Overall, this is a bland, mediocre, and above all forgettable street story that barely fit the episode’s theme and didn’t offer much enjoyment besides Guy’s cameo. That alone can’t make up for a very unmemorable street story, so I sure hope the rest of the episode can.

Following yet another pointless filler segment, we get the letter of the day. It’s O. I was kinda expecting this, but only because I thought the theme was obstacle courses, not opposites. For this, we get a “letter” segment featuring a green thing trying to get a balloon back for a pink thing, encountering many opposites along the way. It’s cute and nicely animated, but overall forgettable.

After a bit where Elmo and Abby play the Opposite Game, it’s time for Abby’s Amazing Adventures. This installment starts with Abby and Rudy racing toy cars, when Basket comes in, asking them to race a real car. Never mind that neither Abby nor Rudy are anywhere near 16 and thus, should not be able to drive. But that doesn’t matter here. Besides, Rudy’s only the navigator. Anyway, they’re facing off against a pair of chickens and a pair of penguins. Racing happens, and the chickens go off course. Abby and Rudy then have a debacle over the radio station, and they get lost. Once they figure out how to get back on track, they see the penguins’ car has melted. This should make them the winner by default, yet it doesn’t. They only win once they cross the finish line. Once again, a confusing, forgettable segment that doesn’t help this already forgettable episode at all.

And speaking of things that won’t help this episode, it’s time for the number of the day! Today’s number is 2. Now, first of all, I’m very grateful this episode actually has a number segment in it! The only problem is that this one isn’t that great. It’s just about 2 fish going up, down, in, and out. Oh well, at least it fits the theme unlike literally everything else in this episode.

Back to things that don’t fit the theme, in Elmo’s World, Elmo’s thinking about maps. He imagines his “friends” (3 nameless monsters who only appear in this segment) trying to follow a map. Smartie shows him a video about different kinds of maps, Elmo plays a game where he and the disembodied voices help a kid follow a map, and Mr. Noodle mistakes a map for a baseball bat and a telescope. Elmo does his happy dance, and the segment ends.

Finally, Abby and Elmo recap the episode, mention the theme that barely existed here, and it’s over.

This episode was a forgettable mess. Nothing that enjoyable happened, nothing made sense both in- and out-of-universe, and I didn’t like it at all. This episode gets a 3/10, and, for the first time since Penelope Penguin, the CoolGuy Seal Of Failure. It’s not annoyingly bad like that episode, but it’s pretty close. I really hope next week’s episode is better.

Again, Abby could quite possibly be a monster too maybe. . . .

The best parts for me were the cold open referencing the classic Near and Far routine, Grover saying "When there's a problem, what do we say?! No really, I'm asking", and Guy Smiley.