After hearing the story of "The Three Little Pigs," Elmo wonders if he and his friends can change the story so the wolf isn't mean. What if he only sneezed the house away because he had allergies? Let's try acting out the new version.

This episode features an all-new street story, I Wonder, What If, Let’s Try ("Jack and the Beanstalk"), Abby's Amazing Adventures ("Writers") and Elmo's World ("Books"). 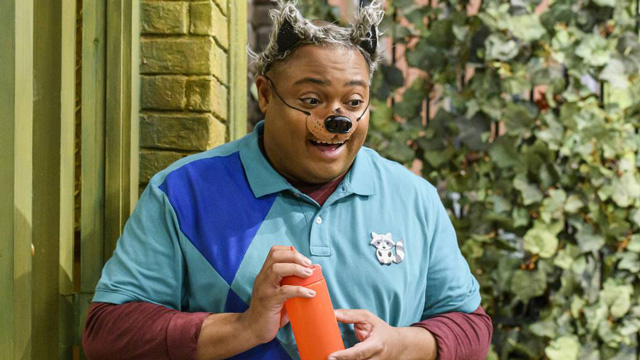 My interest couldn't fill a thimble.

(The only thing I semi-liked was that they actually worked that toy guinea pig that Leslie always has with her into the show somehow).

I'd care to do the honors if there was enough time. Haven't seen it yet, but I'm going to.

Well. Huff and Puff Away. At first, I thought this would be another repeated street story (maybe of #4266 or #4319). I was interested in seeing what theme they’d use for that kind of episode. However, what we got instead was an original street story with an infuriating rest-of-episode to boot. I can’t think of a clever segue, so let’s begin.

The cold open features Elmo and Rosita setting up the theme of storytelling by telling a story. Nothing memorable here, moving on.

The street story begins with Chris reading Elmo, Abby, and Rosita the Three Little Pigs. The kids like the story, but want the wolf to be kind. Chris gives them the idea to write their own version, which they decide to act out. They then run off the get things they’ll need to do so. One very important detail of the exposition here is Chris’ allergies, which will be an important part of the kids’ story.

The kids return in pig ears and noses, and give Chris wolf ears and a snout to wear. They proceed to build a house out of “straw”, and Chris maliciously intends to huff and puff it down. The kids stop him, reminding him he’s supposed to be nice. They revise the story so that he’s bringing the pigs a housewarming gift instead, and Chris gets a ketchup bottle he pretends is a cake. The kids then realize this’ll bring their story nowhere, so Elmo decides the wolf will blow the house down, but by accident (he’s allergic to straw, much like Chris). This works, and they nearly rinse and repeat for the stick house. However, they realize no one is allergic to popsicle sticks, and need to find a workaround. They realize there are flowers in front of the house, which causes him to sneeze it away again. The kids build a brick house out of old cardboard boxes in Hoppers, which the wolf doesn’t blow down, successfully bringing them the housewarming gift.

Overall, I didn’t really like this one very much. There were cute and clever moments, but overall, I was kinda bored. I probably even forgot to put some stuff from the episode in the review. It’s not that bad, but the rest of the episode certainly will be…

We start with another pointless time waster, followed by even more pointless time wasters posing as “The Letter of the Day”. Today’s letter is S, and we get not one, but 2 “letter” segments. The first one is an ugly-looking cartoon featuring a girl named Sabrina and her parrot Sammie looking for her cat Suki. I guess they were trying to make a real letter segment, but they failed. The second one isn’t much better. It certainly looks better, and tells a cute story about a brother and sister’s day at the beach, but they didn’t even mention the letter S until the end. Either of these could’ve been cut (preferably the first one) and replaced with a number segment (spoilers: there isn’t one in this episode). But that’s not even my biggest gripe with the NOTD (you’ll see what is in a bit)…

Following an (admittedly kinda cute) bit of Abby and Elmo telling a story, we get Abby’s Amazing Adventures. In fairness to this episode, this may actually be my favorite AAA segment. It begins with Rudy playing with a rocket toy, when Basket comes in. She shows Abby and Rudy a pencil, and takes them off to be writers. Or so we think. She actually sends them back to their room, and has them write a story there (“Writers can work anywhere!”) This is a clever twist, and why this is my favorite AAA. The two write a story about them… IN SPACE! It begins with them arriving on a distant planet, and deciding to throw a party. They make an invitation, send it through a copy machine, and a space wind (OK, this segment isn’t flawless) sends the invitation across space. A bunch of aliens come to the party, but can’t all fit on the planet. Instead of making the planet bigger using magic (which would’ve made much more sense than what actually happened), they feed it vegetables, which somehow works (again, this segment isn’t flawless). However, once their story ends, we get back to the good stuff. Basket tells them it’s time to go home, but Rudy points out that they never left, complete with the Twilight Zone theme song playing in the background. That was clever. So yeah, this wasn’t perfect, but it’s still my favorite AAA.

And now, the moment you’ve all been waiting for, the Number of the Day. Today, it’s 20! Yes folks, the biggest number used in regular rotation on SST. What do we get to celebrate? Oh who am I kidding, I already told you.


Yeah, you saw that coming. But my frustration goes deeper…

You see, 20 is one of the few numbers we haven’t gotten a Martians NOTD for (we haven’t even gotten higher than 17). This sounds like the perfect opportunity to air it, right? It would be if they didn’t air the season 45 NOTD song instead. Why? I’m sure they already had it made with the rest of them. If it was time, just cut out one of the LOTD segments. Extra time? Put in a godforsaken number segment.

Let’s just get this over with. In Elmo’s World, Elmo’s thinking about books, and imagines Bert reading one. Smartie them shows Elmo a video about books. Elmo and some kids write a story, and Mr. Noodle can’t tell the difference between books and groceries. Segment over.

Finally, Abby, Rosita, and Elmo are in their “brick” house, and recap the street story. They propose the wolf is allergic to bricks. Chris sneezes the house down, and the episode ends.

So that was Huff and Puff Away. Nothing great here that lasted too long, and there were many things I disliked about the episode. All and all, I think this deserves a 4/10. Let’s hope the next episode is better.
A

Elmo asking if the story is over before finally telling the ending in the street story was funny. I really liked the nod to Leslie's plastic guinea pig Gail.

CoolGuy1013 said:
Let’s hope the next episode is better.
Click to expand...