Grover wishes he didn't have a fall cold, so Rudy uses Abby's wand to change the season. But now, every time Grover sneezes, the seasons change.

This episode features a street story from Season 47, I Wonder, What If, Let’s Try ("Riding a Tricycle"), Cookie Monster's Foodie Truck ("Maple Syrup"), Name the Seasons with Elmo and Elmo's World ("Seasons"). 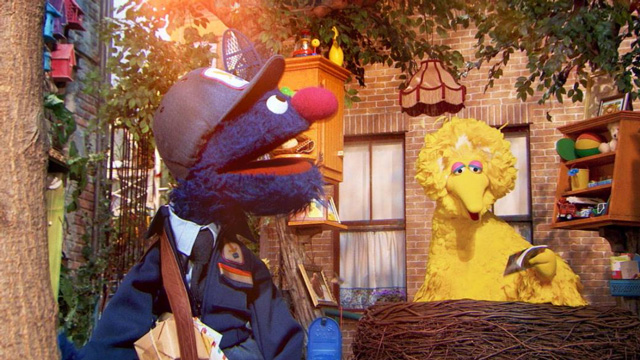 Hey guys! It’s January! You know what that means? Probably not, but it’s my first review of the year! It’s also my first review of a season (pun not intended) 47 episode. This is gonna be fun, since that’s my favorite season of the HBO era. With that said, Sneeze a Season. I’m sure we all know the four seasons, (Winter, Duck Season, Rabbit Season, And Frankie Valli) And that’s what we’re talking about today. But will this episode put a spring in your step, or will it fall into the bad episodes. Let’s find out, shall we?

The cold open features Cookie Monster setting up the theme of the four seasons by eating a cookie decorated like a symbol of each one. It heavily reminds me of that “Another Season, Another Reason, for Eating Cookie” song he sang once.

The street story starts with Chris raking leaves, when Abby, Elmo, and Rudy come by, excited that it’s fall. Rudy doesn’t seem to understand the concept of “seasons”, so Abby conjures up a wheel with pictures to explain it. Grover then comes by, disappointed that he has a cold and thus, isn’t able to enjoy his favorite season. Rudy notices Abby dropped her wand, and casts a spell on Grover so that whenever he Sneezes, the season changes. Grover notices this, and the other characters begin having fun for the appropriate season. Eventually, they catch onto what’s happening, Rudy explains what he did, Abby reverses it, and the story ends.

As for what happens while Grover is under the spell, it’s mostly just the characters acting appropriately for the season and describing what they do in them. Nothing much, but it is amusing.

Overall, I like this street story. It’s a creative concept with a lot of fun scenes. Not much I can say about it, but it’s enjoyable.

Following pointless filler segment #8675309, we get to the letter of the day, which is S. We get another “letter” segment where cartoon kids talk about their favorite seasons. I’d complain, but this one’s actually pretty cute.

Following yet another pointless filler segment (and a recycled one at that), we get Monster Foodies. Today, Cookie and Gonger get a call from a boy who wants a round and flat breakfast. Cookie (of course) suggests a cookie, which he eats. Gonger suggests pancakes, and surprisingly, they not only have all the ingredients, but also a banana to slice. However, they’re out of maple syrup, so they go get more. After learning where it comes from, they make the pancakes (by the way, Gonger pouring the batter into the pan is extremely satisfying), Gonger slices the banana to put on top, Cookie applies the syrup, and they send it to the boy. Overall, a good installment of the segment, even if it only barely fit the theme.

After that, we get the number of the day. Today, it’s (perhaps unsurprisingly) 4. We then get a segment where a boy describes what he wears in each season (which looks like anatomically correct South Park), followed by a segment where Elmo just lists the seasons. Speaking of Elmo…

It’s time for Elmo’s World. Today, Elmo’s thinking about the seasons and imagines the aforementioned wheel. Smartie then arrives, dressed for winter (her favorite season). She then shows Elmo a video describing each season. After it finishes, Elmo plays a game where he puts kids in a park for each season (a kid with an umbrella for spring, a kid with a rake for fall, etc.) Finally, he asks Mr. Noodle’s brother, Mr. Noodle, what he wears in his favorite season (summer). He tries a parka and wearing a box kite, but eventually comes out in a swimsuit and hat, and flies said kite. Elmo does his happy dance and the segment ends.

Finally, we get a closing scene with Grover and Abby recapping the episode. Grover feels a sneeze coming, and Abby grabs an umbrella just in case.

So that was Sneeze a Season. I’d say it was a fun an enjoyable episode. The street story was creative, the segments were nice, and there wasn’t really anything here I disliked. Overall, a solid 8/10. Thanks for reading, and I’ll see you in the next review.

Not gonna lie, I always forget these are coming out on Thursdays now.

Oscarfan said:
Not gonna lie, I always forget these are coming out on Thursdays now.
Click to expand...

I know. It’s hard to balance the reviews and schoolwork.

I haven't seen this episode yet, but it seems like a good one, actually!
A

The only thing I can comment on is the bit with Elmo and a sun played by David and a seagull played by Johnny K. Nice short little bit that could have been the cold open if it was shorter.
D

The majority of this episode's content is from an episode of Season 47.

DCcomicsFan2019 said:
The majority of this episode's content is from an episode of Season 47.
Click to expand...