When the gingerbread house from "Hansel and Gretel" falls, the Fairytale Helpers wonder what might hold the walls together. What if they use frosting? Let's try! 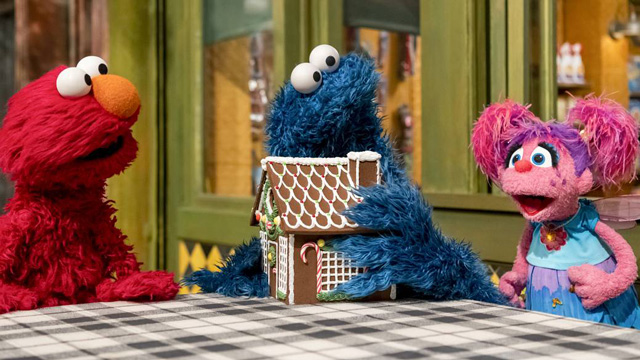 So, the Return of the Fairytale Helpers. Before I move forward, this is actually a sequel to a season 48 episode (Rapunzel Gets a Haircut, to be exact). I haven’t reviewed that one yet, but since this episode contains much of the same material, this’ll make that review much shorter. With that said, will this episode make me live happily ever after, or will it be much more Grimm (get it?) Let’s find out.

The cold open features Elmo and Abby talking about fairy tales, and listing a few examples, including the 3 Little Pigs. They don’t have a visual aid for it, however, as the pigs haven’t finished it yet. Their complaints about editing and such were amusing to me.

The street story begins with Chris reading Abby, Elmo, and Cookie Monster the story of Hansel and Gretel. He even made a gingerbread house for the occasion. The book’s gingerbread house, however, has collapsed. Abby and Elmo decide to assume their identities as “Fairytale Helpers” to fix it, and they bring Cookie and Chris along for some reason. On a side note, when they’re teleported, Chris’ clothes change to lederhosen, which got a good laugh out of me.

Anyway, they decide to fix the house by pushing the walls together. It fails. Cookie then notices a garden hose made of licorice, which inspires the gang to tie it around the house. This almost works, but the house falls apart from the inside instead. By the way, I got a good laugh out of Cookie saying this:

: Can Me eat hose now? Too soon?
Best line of the episode hands down.

They then decide that if they want the house to stay together, they’ll need to stick the walls together. Cookie finds a watering can full of syrup, and they try using that. Unfortunately, the syrup is too runny, and the house collapses again. Elmo then remembers how when Chris built his gingerbread house, he used frosting which got stuck to the counter. This inspires them to use frosting to stick the walls together once and for all. They get some frosting from god knows where, and the walls finally stick together. Hansel and Gretel then appear, and Abby claims they live happily ever after. Chris points out that that’s not until after some other stuff in another funny line. The gang teleport back to Sesame Street, and the street story ends.

This was a really fun street story. I thought it had funny lines, and while I had a feeling that they were ultimately just going to use frosting, I felt it was more about the journey rather than the destination. Probably one of the season’s better ones so far.

After a pointless “I Wonder, What If, Let’s Try” bit, we get to the Letter of the Day, which is F. For this, we get another airing of the “F is for Fairytale” song. I already reviewed this one in my review of Birdie and the Beast, so please read my review of that episode if you want to hear me hush about it. You can read it here.

After a cute bit of Elmo and Abby acting out Little Red Riding Hood (with Elmo as Little Red and Abby as the wolf), we get to Monster Foodies. I know this might not be a popular opinion (at least on this forum), but I really like these segments. And this one is no exception. It starts with Cookie Monster and Gonger getting a video call from a girl who wants to try porridge. Cookie, however, has no idea what porridge is. Gonger tries to tell him it’s oatmeal, but Cookie instead decides to call Baby Bear to see if he can help. He explains to Cookie that porridge is oatmeal, and when Cookie understands, Gonger goes ballistic as that’s what he’d been trying to tell Cookie the whole time. Only making him feel worse is how Cookie used up all the oatmeal to make oatmeal cookies. Once Gonger calms down, the two go to the oatmeal factory and get more. They make the oatmeal (with “a little kazoo”, courtesy of Gonger), and send it on its way. The girl calls them again to thank them, and the segment ends.

Next is the number of the Day, which (thanks to the season 45 NOTD Intro), we find out is 10. And now we go to Elmo’s- Wait… is that a… no, it can’t be…
BUT IT IS!
Yes folks, 8 episodes in and we finally get our first number segment. This one tells the story of 10 knights who try to fight a dragon, only for him to just be hungry. They feed him 10 turkey legs and befriend him. I like this one. It’s cute, well-animated, and tells a nice story.

Alright, now it’s time for Elmo’s World (and I do mean just Elmo’s World this time, not Monster Edition). Anyway, today he’s thinking about fairy tales and imagines Goldilocks and the 3 Bears (portrayed as the SST characters, of course). Elmo wants to learn more about fairy tales, so Smartie comes in, dressed as a knight (she says it’s from her favorite fairytale, but we never learn which one). She shows Elmo a video about fairytales, and then leaves for a date with a dragon. Elmo then plays a game where the audience (and by that I mean disembodied kid voices, still better than real fake interactivity) must direct Jack down from the beanstalk. They somehow succeed by only giving vague directions. And speaking of Jack and the Beanstalk, Elmo asks Ms. Noodle how Jack got to the giant’s house in the story. She dresses as a knight and a fairy before finally planting a beanstalk of her own and climbing it. Elmo does his happy dance, and the episode ends.

: Talk about a fairytale ending!

All in all, I really liked this episode. It was funny, entertaining, and enjoyable. Sure, it was also kinda predictable, but I think I still enjoyed it enough to give this one an 8/10. Thanks for reading, and see you in the new year.

A couple of amusing lines from Cookie and Chris, but otherwise "meh."

Remember when the adults were supposed to be smart? Chris made a gingerbread house already so he should already know what would work.

Oscarfan said:
Remember when the adults were supposed to be smart? Chris made a gingerbread house already so he should already know what would work.
Click to expand...

You're one of the ones who's always quick to point out SS follows almost no sort of canon or continuity whatsoever - especially in recent years. But yeah, this is getting kind of tiring.

It's not like "Chris made a gingerbread house in #4154 a number of years ago." It's literally in the same episode.

I thought Cookie and Elmo were the funniest parts of the episode. Cookie trying to eat the house and Elmo just silently shaking his head or turning his head were just so funny. Who played the 3rd pig in the cold open? I know Stephanie and Eric were the first two. I kinda wanted more of Hansel and Gretel, they're two of my favorite recurring Sesame characters who aren't main ones.

antsamthompson9 said:
Who played the 3rd pig in the cold open? I know Stephanie and Eric were the first two.
Click to expand...